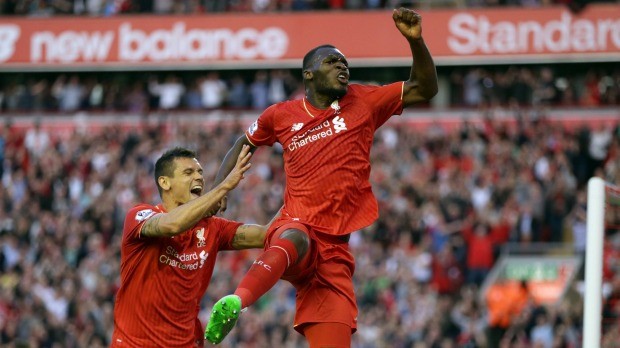 Liverpool dominate the back pages on Tuesday morning after their not-so-convincing-yet-effective 1-0 victory over newly promoted Bournemouth on Monday night at Anfield.

New summer signing Christian Benteke made his Anfield league debut memorable with a finely taken goal from close range in the first half. Despite late pressure from the visitors, Liverpool defence was resolute enough to ensure there’s no damage being done to the scoreline.

The performance was lacklustre and pretty flat, but it’s the end result what matters most. Six points from two games – Brendan Rodgers couldn’t have asked for a better start to the season.

The next three games key for Liverpool, that includes two tough away games against Arsenal and Manchester United, and if Rodgers’s men come out with at least four points from there, Liverpool will have prepared a solid foundation to mount a serious top-four challenge.

According to reports, Manchester United are hoping to tie up a deal with Barcelona within this week for Pedro Rodriguez.

United’s executive vice-chairman, Ed Woodward was in Barcelona last night to try to finalise the move for the Spanish forward. The Premier League giants are hoping to sign the 28-year-old forward for a fee in the region of £22m, as the club aim to bolster their attacking department following the departures of Angel di Maria and Robin van Persie.

Meanwhile, United, who missed out on Champions League football last season for the first time since 1995-96, will be looking to secure their progress to the group stages with a victory over Club Bruges in the Champions League qualifying two-legged tie.

Chelsea have submitted a third bid, now of £30m, for the Everton defender John Stones, though as per reports, the proposed deal is still likely to be rejected.

The Premier League champions have had lodged two earlier bids – £20m and £26m for Stones, but Everton  are adamant the defender will not be sold this summer.

Chelsea have already signed Abdul Baba Rahman from Bundesliga club Augsburg, but the Champions still need defensive reinforcements. Skipper John Terry was subbed at half-time during Chelsea’s 3-0 defeat at Manchester City on Sunday, which has been perceived as a message to the hierarchy that signing a central defender is a top priority.

Kevin de Bruyne has revealed that he will play for his current club Wolfsburg for the 2015-16 season. The Belgium attacking forward, who won Lower Saxony’s Footballer of the Year for 2015 at the Sport Bild award on Tuesday night, said that he was looking to continue his career with the German club beyond the summer.

His agent, Patrick De Koster, however has a different plan, and he maintains the transfer move is very much on. Check the full report.