Valencia striker Roberto Soldado could be making his way to the Premier League this summer.

Tottenham have been named among the favourites for his signature, but interest is also said to come from Manchester City and Chelsea.

All three sides are in need for a prolific goalscorer and the 28-year old seemingly fits the bill. Spurs manager Andres Villas-Boas has long-admired the Spanish international, and is expected to table a bid.

Soldado has taken the mantle left after David Villa joined La Liga winners Barcelona in 2010. Joining a month after the latter’s departure, Soldado has scored 82 goals in 141 games for Valencia during his three years with the side.

He’s highly-rated in Spain, but has said he would consider moving to the Premier League as a new challenge. His asking price is said to be around £15-20M.

After Tottenham lost out on David Villa this summer following his move to Athletico Madrid, they have been in the market for another striker. Aston Villa’s Christian Benteke is said to still be a potential target. The London side also missed out on Wilfried Bony after he joined Swansea City.

Despite the ongoing rumours of the side being linked with a host of European forwards, many question whether Tottenham are willing to part with another large amount of money. 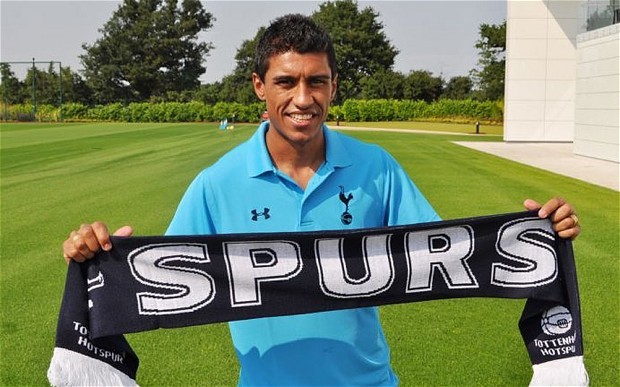 With Tottenham spending £17M to sign Brazilian midfielder Paulinho pictured, chairman Daniel Levy has been negotiating cut-price moves for the rest of his summer targets. The bidding war could see the Premier League side ending up with no more new recruits.

Tottenham midfielder Clint Dempsey has been placed on the transfer list as means of generating funds, while striker Emmanuel Adebayor could also be sold.

The next few weeks will be crucial for Tottenham to have a squad ready to contest for a Champions League place in the coming season.