Jermain Defoe broke Martin Chivers’ record of 23 goals in European competitions for Tottenham early this month. He has scored in every Europa League game this campaign but surprisingly has only made one Premier League start to the season.

At 31, he feels he still has something to offer to his nation and wants to reignite his international career. He needs to play regularly, something which he is not getting at Spurs this season, due to the arrival of Roberto Soldado.

According to reports from The Times, Spurs have put a price tag of £6.5m on Defoe, having received interests from London rival clubs in the striker. West Ham United and Queens Park Rangers are trying to take advantage of Defoe’s situation – the striker desperately in search of regular game time at the White Hart Lane, which would increase his chance of being selected by England for the 2014 World Cup this summer. 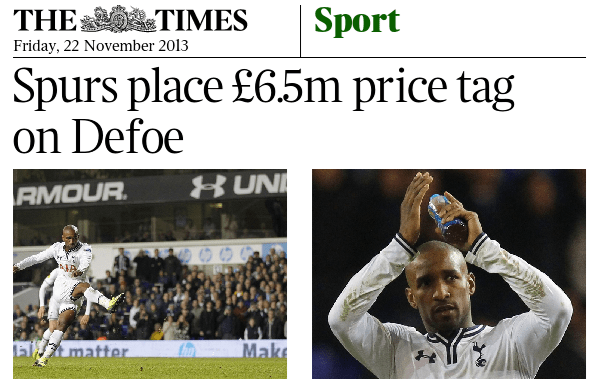 Spurs has had offers for Defoe in the summer, but they were unable to find a possible replacement, hence, it prevented him for departing.

West Ham are thought to be favourites in signing him. The Hammers are lacking strike options, following the injury to Andy Carroll, who has been receiving treatment in Amsterdam.

There are some concerns about Defoe’s reported £65,000/week wages while some supporters are unhappy about his possible chance of returning as well. Defoe handed in a transfer request back in 2003, less than 24 hours after West Ham got relegated.