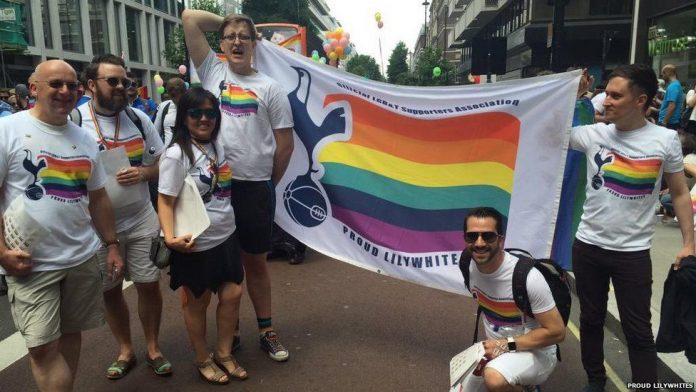 The Ivory Coast international had a turbulent past in Paris that included a homophobic rant at France legend Laurent Blanc and a conviction for assaulting a police officer.

The Proud Lilywhites, the official LGBT+ Supporters’ Association for Spurs, want Aurier to learn from his past mistakes.

“We were initially unhappy with the signing, but given our positive dialogue with the club we would like to use this as an opportunity to build bridges and make lasting change,” the group said.

“Football has the power to transform individuals’ lives and entire communities. At its best, it doesn’t merely delight us – it can provide us with a chance to transcend geographical boundaries and learn to work and play and celebrate together.

“Players, clubs and the football authorities need to take this responsibility seriously, so what happens when players such as Serge Aurier who have been openly homophobic in the past join a new club and have a fresh start?

“We started the Proud Lilywhites in 2014 because we wanted to ensure that every Spurs fan, regardless of their sexuality or gender identity felt safe to enjoy watching their football team, knew they had a community with which to watch it and felt that they belonged.

“Our flag, which stood tall at White Hart Lane, became a testament to this.

“We wanted to be at the forefront of social and cultural transformation via football — changing hearts and minds – being part of creating the conditions that ensure all LGBT+ fans and staff feel safe and welcome in the football family.

“But this is a journey – we don’t want to recriminate. One of our main tools for change is education, so we’d like to see engagement with LGBT+ fans is at the top of Serge’s list.

“We’ve already done great work with stewards, club staff and fans and look forward to working with the club and other supporters, to show Serge Aurier that Spurs fans are incredibly diverse, welcoming and loyal.

“We all love this game and we want to win matches and trophies, but not at any cost.

“Homophobic language, when unchallenged, can have consequences – we have to be the change we want to see. Making change, player-by-player, even fan-by-fan if necessary, is why we’re here and we won’t rest until we’ve done it.

“Welcome to the famous Tottenham Hotspur Serge – we look forward to you getting to know us.”