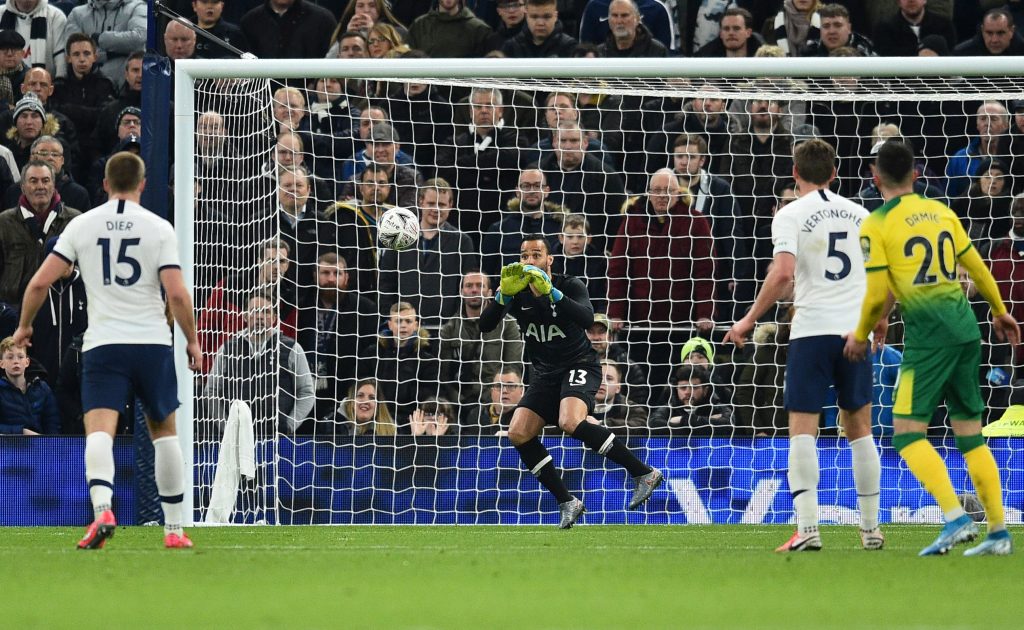 Tottenham Hotspur crashed out of the fifth round of the F.A Cup last night, losing 3-2 on penalties to Norwich City after both sides played out a 1-1 draw after 120 minutes.

Jan Vertonghen put Spurs ahead 13 minutes into the game after heading in Giovani lo Celso’s superb freekick, but the hosts didn’t do much to threaten the visitors afterwards, with Tim Krul keeping them at bay with some fine saves.

His opposite number Michel Vorm wasn’t particularly in fine form at the other end after playing his first game in a long while, allowing Norwich draw level 12 minutes from time following a mistake.

While the Spurs’ third-choice goalie made smart saves from Emiliano Buendia and Lukas Rupp, he spilled Kenny McLean’s shot, allowing Josip Drmic to bundle in from close range.

Vorm saved McLean’s spot-kick after Eric Dier put Tottenham ahead, but Krul saved three out of the hosts’ five kicks while Norwich scored their next three to book a place in the quarterfinals against Derby County/Manchester United.

Tottenham had a chance to double their lead in the first-half and that would have put the game to bed, but Lucas Moura failed to square the ball to a free Dele Alli and Krul saved his effort.

The Brazilian didn’t impress, and Spurs fans on Twitter have come for his and Vorm’s heads.

Here is how some of them reacted to the duo’s unimpressive performances against Norwich:

Vorm shouldn't be playing for us and Lucas is best as a sub.

LUCAS MOURA HAS BLOOD ON HIS HANDS. SQUARE THAT TO DELE FOR 2-0 BEFORE HALFTIME AND THE TIE IS OVER. INSTEAD SELFISH. #RELEASEHIM

i cant believe they choose michel vorm for a situation like that:/

Only 1 person cost us that game…. Michel Vorm

When we sold Michel Vorm last season I thought the pain was over! How wrong I was 😫 pic.twitter.com/pmNebIHdvz

Won’t unnecessarily criticise Mourinho, but think it’s extremely necessary to question why on earth Michel Vorm starts that game after being signed halfway through the season as an emergency third choice backup keeper… #THFC

Michel Vorm is undeniably the worst-performing keeper we've ever had, and we've had Hans Segers between the sticks… Anyone care to tell me of a positive memorable game that Vorm has had?

Lucas moura has not been good enough for the period Harry Kane has been injured, why not give Troy parrot the chance Lucas is wasting?

I truly hate Lucas Moura, he's a selfish. Even if he scored the hat-trick in Amsterdam, the rest of the season he's a ghost. Zero assists.