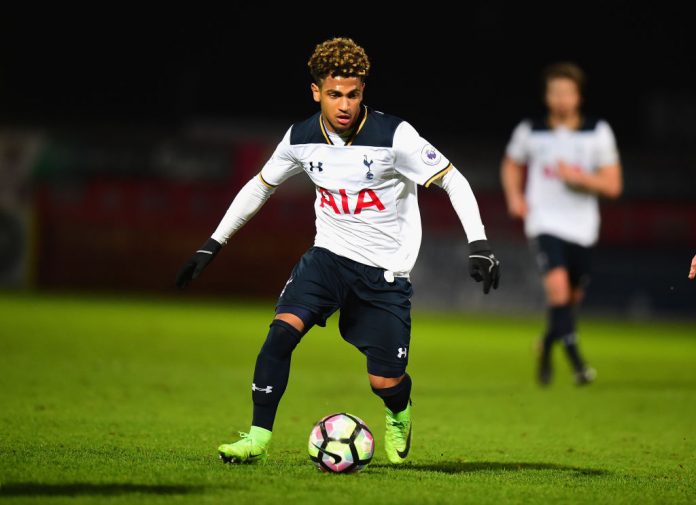 Marcus Edwards produced a fantastic performance as Tottenham managed a 1-1 draw against Liverpool for the under-23 side at Anfield on Friday.

The north London club played almost the entire match with 10 men after Timothy Eyoma was sent off ffor a deliberate handball after only two minutes.

However, it was Edwards who stole the show, earning plaudits from the Spurs fans. The 19-year-old attacking midfielder scored in the 23rd minute for the visitors when he tricked his way beyond Lewis inside the area and finished underneath Caoimhin Kelleher.

Edwards was a live-wire throughout the game, and at times three to four Liverpool players were stationed to prevent him. Neil Jones of Goal.com wrote on Twitter that Edwards looks a “real talent” for Spurs.

Spurs fans took to social networking site Twitter to express their reaction on his virtuoso performance. Most of the fans raved about his immense talent, while some advised him to knuckle down and not waste his potential.

Lovely goal. Would love to see him involved a bit more with the first team. Seems a real talent.

Super assist and great touch and awareness for the goal, but sorry to say – the keeper should have saved that one ☝?

I thought Spurs were about to score an unreal goal. After great play from Parrott and Georgiou, Edwards was backing Liverpool defenders into their box. He beat three men but the fourth stopped him before he could get his shot off. Man, I’ve missed watching him.

Be great to see him make the bench. As we don’t spend any money seems strange not to give this talented kid an opportunity.

I hope he makes it, whether for Spurs or not. Would be an incredible talent for the national side

Marcus Edwards subbed off in stoppage time. A welcome reminder of his talent. Unfortunately he may have played himself out of a permanent move away this month, a move that would be best for his career. Not sure a halfhearted loan or more time in the U23’s will be of use to him.

MOTM – @marcusedwards__ He’s so so good. It will be the biggest waste of all time if he doesn’t make it. Please Please knuckle down young man the world is your oyster.

Edwards is one of the brightest talents in the Spurs academy and Mauricio Pochettino praised his technical ability, comparing him with Lionel Messi.

However, there are doubts over his attitude and willingness to work hard which has left many Spurs fans (and possibly Pochettino as well) frustrated.

Last season he was sent on loan to Norwich but he struggled for regular game time. Edwards is a fantastic young talent, but the only way he can get back in Pochettino’s good books is by delivering on a consistent basis.