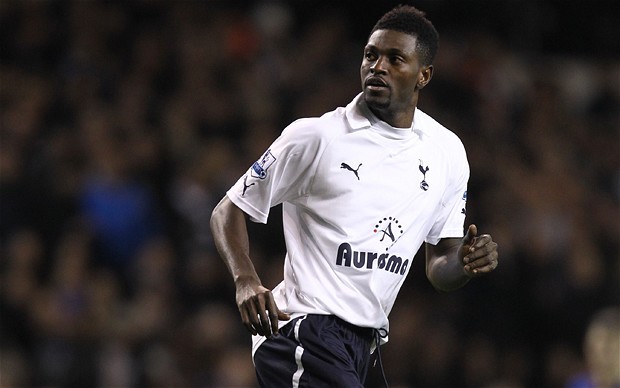 Tottenham have announced that they have finally managed to agree terms on a transfer to sign Emmanuel Adebayor from Manchester City. The Togolese marksman has signed a permanent contract with the north London outfit, and becomes Andre Villas-Boas’ third summer addition after the arrivals of Jan Vertongen and Gylfi Sigurdsson.

The fee is said to be in the £5 million region, but this figure is thought to have been agreed between the Premier League sides some time ago. The protracted nature of the proposed deal was due to the African attacker’s wages, with Adebayor believed to have taken a considerable pay cut to sign for the White Hart Lane outfit.

Even if Adebayor has relinquished £190,000-per-week wages at the Etihad Stadium, any frustration at his dip in financial reward was not evident in the player’s comments in the wake of the deal being agreed.

“I’m back!!!! Tottenham here I come!! I’m hungry for goals…Get ready,” he told his Twitter followers.

“I am pleased to be signing for Spurs on a permanent basis after finally agreeing my departure with Manchester City,” he went on to state to Tottenham’s official website.

“It may have taken longer than expected but I am delighted to be back at Tottenham Hotspur.

“I really enjoyed my time here last season and I am hoping we can achieve great things together again.”

Despite rising to prominence at local rivals Arsenal, Adebayor is a popular figure at White Hart Lane, and the positive noises after the move will continue to endear him to the White Hart Lane faithful.

The signing will increase Villas-Boas’ options in attack, which were looking decidedly thin on the ground, with Jermain Defoe and Harry Kane the only other recognised strikers in the Spurs first-team. That said, the Portuguese trainer has previously stated that he will only be signing one striker this summer, so any further additions can be expected in other positions.

Adebayor’s return has a number of positives for the club. Firstly the centre forward is not a new signing as such, and will hope to build on his existing on-field relationships with the likes of Gareth Bale, Aaron Lennon and Rafael van der Vaart.

The targetman’s style of play will fit well into Villas-Boas’ 4-2-3-1 formation also, with Adebayor to be supported from deep as a lone forward. Spurs will benefit from his ability to hold up the ball, and the club’s fans will hope the African can show the same athleticism and physical attributes that he displayed last term.

However, the relationship with player and club could go either way. Spurs supporters will hope that the striker can deliver more than the 18 goals he bagged last term, as Adebayor will be the side’s main goal threat once more.

Finally, the player comes with a reputation and an ego, which Harry Redknapp successfully managed last term whilst the side were excelling for the majority of the campaign. Villas-Boas went head-to-head with senior players at Chelsea only to come-off second best; the coach will need to learn his lessons and try to keep Adebayor happy, even if he is not as reputed a man-manager as his predecessor.