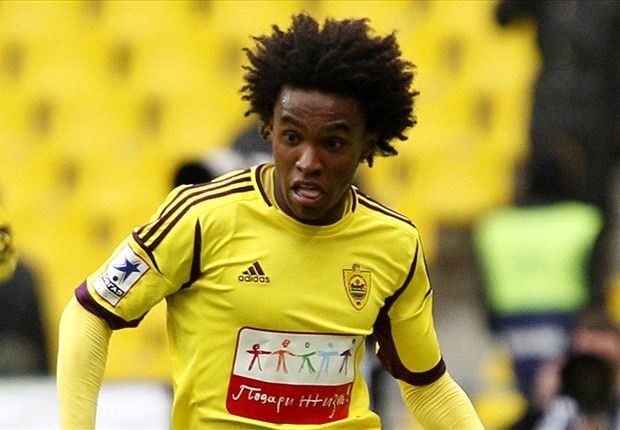 The attacking-midfielder is being spoken about by every football publication, has been tipped for a bright future, and now Tottenham Hotspur are said to be closing in on completing the deal.

25 years old, a Brazilian international, and currently playing for Russian Premier League Anzhi, Willian has been on the radar for many sides around Europe this summer.

His form in Russia has left something to be desired since his arrival last season, but he’s started the new campaign much better. With three assists in his first four games, he’s already bettered his stats of his debut year at Anzhi.

‘I really, really like him. He will be an asset for whoever’s going to get him. If Spurs get him, they’ll get an excellent player. He’s very versatile and he’s a very creative player, an excellent professional with a very good personality. He can beat a player, he can score a goal. An absolute delight to work with.’ – former Anzhi manager Rene Meulensteen.

Willian has only made two caps for Brazil, but has plans to make the 2014 World Cup next summer. He’ll need to be playing at the top level and the top of his game in order to make the squad, so a move to Tottenham would go some way to achieving that.

Spurs’ league compatriots Liverpool were also said to have been enquired in his services, but were unwilling to pay the reported £30M asking price to procure his signature.

It’s said to be just a matter of time until he’s announced a Tottenham player, and his arrival could mean the departure of the side’s player of the season for 2012/13 – Welsh forward Gareth Bale.

With Tottenham’s spending being around the £90M mark, should Willian join, the sale of Gareth Bale would see them have a minimal net spend for this summer – while boasting a side good enough to challenge a top-four finish. Potentially shrewd business by chairman Daniel Levy.