There can be no doubt that a bitter rivalry has been forged between Liverpool and Chelsea in recent times. Ghost goals, shared Spanish managers, and stolen strikers; the Reds and the Blues have have created a rich and varied tapestry of war over the last decade. 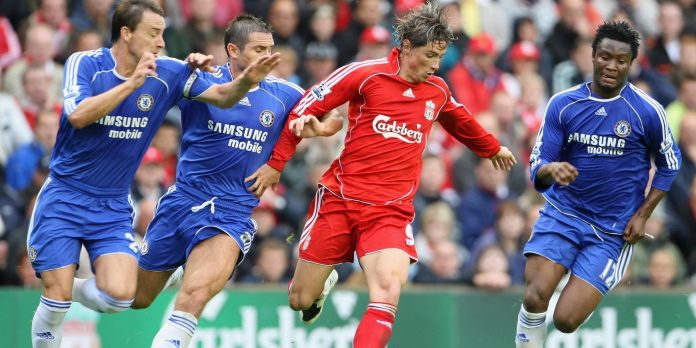 Goals have never been in short supply between the two sides, and today’s encounter has the potential to be another high-scoring event.

Here is a five-strong list of the very best efforts seen between Chelsea and Liverpool:

Chelsea came out on top in this tie on the way to that famous Moscow final against Man Utd, but the goal of the game was reserved by Liverpool maverick Ryan Babel.

The Dutch winger endured a decidedly mixed career at Anfield, but his rocket from way out was pure class. Struck with such venom and intent, the ball couldn’t even be stopped by both of Petr Cech’s hands, as it shot into the top left corner.

The goal gave Liverpool renewed hope, as they only needed just one more to make it through to the final. It was not to be however, and Babel’s strike is remembered via the disappointment of a tight encounter lost by Rafa Benitez’ side.

Before the big money move, the head shave, the open-goal miss, and the intense criticism; the young Spaniard washed up on the shores of Merseyside in 2007.

Fernando Torres’ first ever goal for Liverpool typified the direct, lethal brand of football the striker became famous for during his time in the North, and it just happened to be against his future side.

Running onto a sumptuous through ball from the ever-present Steven Gerrard, Torres teased Chelsea defender Tal Ben Haim for a brief moment before speeding off in a blink of an eye to tuck a neat shot into the corner of the Chelsea net.

In what was arguably the most entertaining encounter between the two sides in recent memory, Chelsea battled past a brave Liverpool side to book a place in the semis against Barcelona, with Alex’s blockbuster free-kick the pick of the goals.

The Brazilan became known at the Bridge for stunning set-pieces, and this was a prime example of the sheer power of the defender’s right foot. Powering up to the ball from a good 30-yards out, the now PSG centre-back absolutely belted the ball around the wall and past the despairing dive of Pepe Reina in the Liverpool goal.

Some say it took the Chelsea stewards three days to mend the net.

Another defender remembered for his blockbuster shots; Liverpool’s Riise did much more than just shoot at goal back in 2006, when he ran a full 60 yards from his own area before unleashing a trademark drive past Carlo Cudicini in the Chelsea goal.

Andriy Shevchenko may have equalised for the Blues, but an 80th minute goal from Peter Crouch secured the prize for Liverpool, and another satisfying victory over their southern rivals.

The Ivorian is a legend at Stamford Bridge for so many reasons, and his thunderous effort against Liverpool was just one of a great many spectacular and meaningful strikes now filling the annuls of Chelsea history.

Chesting the ball down 18 yards out with his back to goal, the striker swiveled effortlessly and cracked in a half-volley within a blink of an eye. Not a single Liverpool player could react, and the stunned commentator had to quickly adjust to get to grips with the event.

A truly sensational strike, and certainly not the last in the long career of the Chelsea demi-god.

What do you think? Which do you think was the best goal scored in games between the sides? Let me know in the comments below…