It’s often done, easy in fact. You are watching a game and the opposition’s fancy-dan number 10 hits the deck after a hard (but fair) challenge from your team’s midfield enforcer. The scream goes up, their bench goes up, and their players surround the ref.

It winds you up, “He hardly touched him ref”, you cry. Indeed, it looked a fairly innocuous collision. But then the replay comes on, and you get to see, in slow-motion, the exact moment the “diving git” had his leg snapped.

Welcome, ladies and gentlemen, to the top 10 most famous, and sickening, injuries ever sustained on a professional football field:

Of all my memories of P.E. at school, of lost balls, of final-whistle fights, perhaps the most vivid I have is the huge life-size picture which adorned the walls outside the boys’ changing rooms. It featured a tackle between Coventry City’s David Busst and the Manchester United pair Denis Irwin & Brian McClair, as they attempted to reach a loose ball in the United penalty area. The sight of Busst’s leg being caught between those of McClair & Irwin, forcing it to face almost 90 degrees away from the rest of his body, ripping through his sock, brings a shiver to the spine. Peter Schmeichel, the United keeper, who both saw and heard the injury at close quarters, was visibly distressed and was seen parading around his penalty area whilst Busst, and a significant amount of blood, was removed from the field.

The long term implications for Busst were a series of over 20 operations to repair the extensive fractures to both tibia and fibula. Unfortunately, after contracting infection from these operations, Busst was forced into retirement at the age of 29. He has since managed non-league Evesham United, having earned his coaching qualifications.

When football folk ramble on about “miscarriages of justice”, they invariably talk about penalty decisions that have gone against their own team, or handballs not spotted, eventually moving onto the need/lack of need for video replays. But very few people around the world will ever forget the “miscarriage of justice” which took place in Sevilla during the 1982 World Cup semi final between France & West Germany.

It was a great tournament, with Michel Platini at his imperious best for the free flowing French. In the second half, with the score tied at 1-1, he lofted a beautiful precise pass over the top of the German defence for the marauding full back Patrick Battiston to chase. With the ball bouncing, and German keeper Harald “Toni” Schumacher racing from his line to meet him, Battiston attempted to lift the ball over the advancing keeper, but saw his effort drop wide.

Well, I say “saw his effort drop wide”. He didn’t. He saw nothing after Schumacher callously and surely deliberately pole-axed Battiston using the full weight of his body to crash into the head of the Frenchman in mid-air. Battiston was left unconscious, and there were fears for his life as the ambulance struggled to gain entry to the pitch. Platini himself has since said that he was fearful that his team-mate was dead. Fortunately for Battiston, his injuries were “only” damaged vertebrae, a broken jaw and the loss of four teeth. Schumacher incredibly escaped without so much as a booking for the incident, whilst Battiston would not play again for five months.

It is all well and good being injured in a tackle, an occupational hazard for footballers you might say. But often the most serious injuries are sustained with no-one else in the vicinity. That was certainly true of Manchester United’s Alan Smith, playing in an FA Cup tie against Liverpool at Anfield in 2006. Late in the game, with United trailing by a single goal, Smith attempted to block a fierce free kick from Liverpool’s John Arne Riise, but as he did so his left ankle and foot twisted beneath the weight of his body. The damage was a broken bone in his leg, and a complete dislocation of the ankle joint. The image of Smith’s foot, seemingly detached from the rest of his leg, whilst he clung to team-mates and physio staff in agony, was a horrific sight. He was out of action for seven months.

Broken legs are often the most sickening injuries to look at; the stress put onto a bone in order to break it is horrific to even think about. In Celtic’s Henrik Larsson’s case, there seemed to be very little to worry about as he challenged Lyon’s Serge Blanc for a loose ball down the left hand channel in October 1999. But as the pair jostled for the ball, Larsson’s left leg simply buckled beneath him, leaving it almost hanging off as he lay in agony on the ground. He had suffered a double fracture of both the tibia and fibula, similar to the injury suffered by David Busst. Unlike Busst however, Larsson made a full recovery and, incredibly, was back scoring goals for Celtic by the end of the 1999-2000 season.

Goalkeepers are a mad lot. They have to be really. How else could you explain the fact that while all the other kids in the playground are competing for bragging rights and top goalscorer awards, they are ripping yet another set of trousers diving on concrete to keep out a close range header (only to see the fat goal-hanging kid gleefully bash the rebound into an empty goal)?

But Bert Trautmann, now he takes this oft-repeated stereotype to a new level. He really does. It was during the 1956 FA Cup final between Trautmann’s Manchester City, and Birmingham City, that the former German PoW dived bravely at the feet of Birmingham centre forward Peter Murphy, sustaining a significant blow to his neck. Of course this was in the days before substitutes, let alone substitute keepers, and so Trautmann- despite concerns from City’s “medical staff” (some bloke with half a sponge) – continued. City went on to win 3-1, and enjoyed a post-match banquet, which Trautmann attended in considerable pain. Days later, when the German eventually sought medical advice, he was advised that he had suffered crushed vertebrae in his neck, and was lucky to be alive. Told you. Mad.

Spain is known for its tough, uncompromising defenders. From “The Butcher of Bilbao”, Andoni Goikoetxea- who once broke Diego Maradona’s leg, to “The Beast of Barcelona”, Miguel Angel Nadal. But neither of these two luminaries, as far as I am aware, have ever come as close to committing manslaughter on a football field as Sevilla captain Javi Navarro did in 2005.

Juan Arango is Mallorca’s best player, often fouled as team’s look to prevent him from asserting his influence on a game. But Navarro took this one step further than most. Arango was running at the Sevilla defence at full pace when Navarro decided to do the only suitable thing, he smashed his elbow straight into the face of the Venezuelan, causing him to break his cheekbone and swallow his tongue, only the quick thinking of concerned players from both sides prevented Arango from dying on the pitch. Thankfully, Arango was back playing within a few weeks.

Gary Mabbutt is one of football’s nice guys. No question about it. In sixteen years at Spurs he established himself as one of their all-time great servants, a rock at the back and an FA Cup winning captain. He even became a model of support for sufferers of diabetes, demonstrating on Blue Peter how he deals with the illness in his every day life.

That is why when he was on the receiving end of an elbow from Wimbledon hard-man John Fashanu in a Premier League game in 1993, leaving him with a cheekbone fractured in four places, and an eye socket fractured in three, there was much public outrage. Especially when Fashanu escaped punishment from the FA over doubts about his intent to cause injury. Mabbutt contemplated legal action, but decided against it, and was out of action for a year.

Ok, so most of you will have heard of the other names on this list, and wonder who the hell Ewald Lienen is. Ewald Lienen is a former German midfielder and manager, who has represented the likes of Borussia Moenchengladbach, FC Cologne & Hanover 96 in a career spanning more than 30 years.

But enough pleasantries, Lienen is also the man who when playing in a match for Arminia Bielefeld against Werder Bremen in 1981, suffered this horrific wound to his right thigh after a tackle which can quite leniently be described as “studs up”. The wound was almost 30cm in size, and was deep enough to expose Lienen’s muscle tissue and thighbone. Incredibly, the footage of the incident shows Lienen refusing to stay on the ground to have the wound treated, choosing instead to remonstrate with just about anyone who gets in his way. Modern players take note!

The most recent injury on this list, and one which will certainly live long in the memory. Eduardo was enjoying a fine run of form after a slow start to his Arsenal career, when the Gunners played Birmingham at St Andrews in February of this year. Just three minutes into the game, the Croatian striker nicked the ball away from Brum defender Martin Taylor, who caught Eduardo with his studs high up his shin. The leg simply snapped under the weight of the tackle, and Eduardo was left with a compound fracture of his left tibia, and a dislocated ankle. Taylor was red carded immediately, whilst Eduardo’s team-mates Aliaksandr Hleb & Cesc Fabregas were visibly sickened by the extent of the injuries. Sky Sports decided it would not screen replays of the incident due to the distressing nature of the pictures, whilst Arsenal boss Arsene Wenger declared that Taylor “should never play again” (a statement which he later retracted). Eduardo is expected to return around Christmas time. 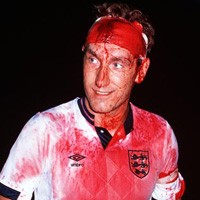 Ok so you are ok with leg breaks, with unconscious players, with ankles pointing in the wrong direction, but how are you with blood? If you are not, then Terry Butcher’s injury playing for England against Sweden in a crucial World Cup Qualifier in 1989 is probably best left alone for you.

Butcher was England’s lion in defence, willing to put his head where most people wouldn’t put their enemies. After sustaining a cut in an aerial collision early on in this game, Butcher, covered in blood, was bandaged and plastered up and sent back on to the field. Despite his blood loss, and the wound being almost central on his forehead, Butcher continued to put his head on anything that came his way, reopening the wound and rendering the bandages and plasters pretty much pointless.

By the end his England home kit- trust it to be the game where England wore white shorts as well- had turned into a full red England away kit, with manager Bobby Robson telling a young Paul Gascoigne that “that is what it’s like playing for England”. If that’s the case Bobby I think I will pass!