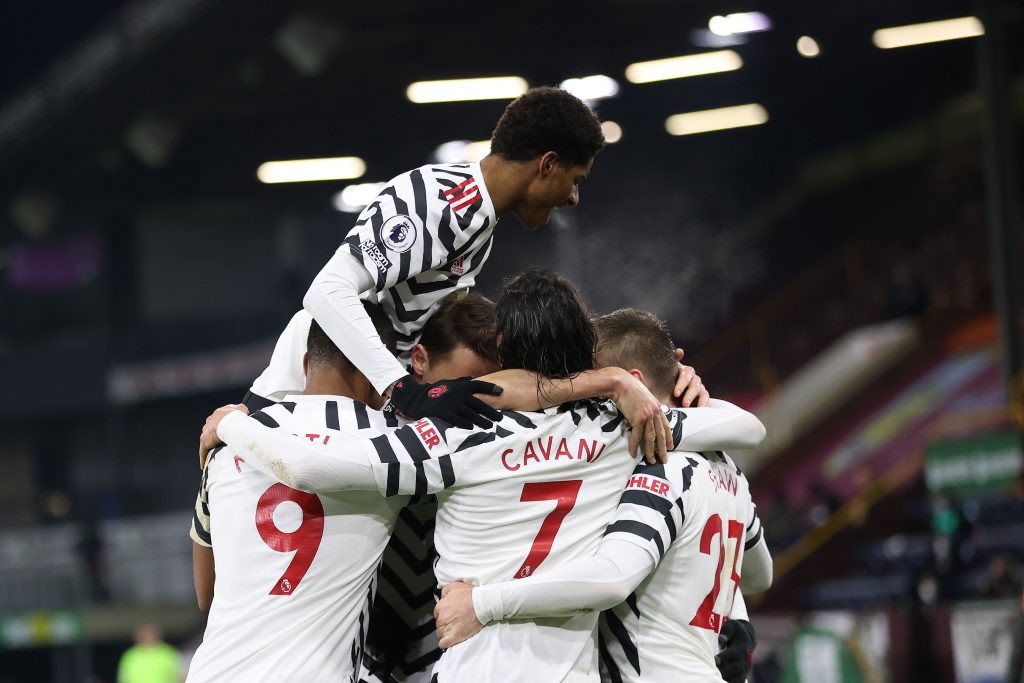 2020 was bad enough, but in 2021, we have yet more crises even though we have not even endured half a month, as Manchester United have somehow found a way to the very top of the Premier League table for the first time in nearly three-and-a-half years.

On a technicality, they did top the table on the Friday night of the opening weekend of the 2018/19 season when they won the very first match of the season but, practically speaking, that shouldn’t count.

Now, 1,216 nights after they last topped the table, the Red Devils have returned to the place that they will feel they belong. Here is all that happened at the club in that timespan:

José Mourinho was in charge of United the last time they went top of the league following a 2-2 draw at Stoke City. They spent the rest of the 2017/18 season trying and failing to catch up to their local rivals, who quite simply dominated the league.

With 81 points, Mourinho felt that he did everything he possibly could in the Premier League with the resources that he had, later claiming that ‘finishing second with United was among his top achievements’.

The League Cup that year was surely not among his achievements, though, as United were knocked out in the fifth round by Bristol City. Although Mourinho thought that Bristol were ‘lucky’, he did admit that it was a ‘beautiful day for football’.

The UEFA Champions League wasn’t much better either. After winning five out of six group stages matches and topping Group A, United drew Sevilla in the round of 16.

There were no goals in Spain, and after that, FIFA-favourite Wissam Ben Yedder’s brace at Old Trafford knocked the Red Devils out, causing their manager to strongly defend his work for a mere 12 minutes.

Although United did reach the FA Cup final, they failed to lift the trophy despite dominating the match as Eden Hazard’s penalty helped Chelsea to a 1-0 victory. To this day, this is the once-unstoppable Red Devils’ most recent final appearance.

The start of the 2018/19 season was quite bad for Manchester United, as they lost two of their first three Premier League matches for the first time since 1992. Following the 3-0 reverse against Tottenham Hotspur, Mourinho delivered his famous ‘respect’ rant.

Then came another Carabao Cup disappointment, as Derby County beat United 8-7 on penalties in the third round. Less than a month after this, the Red Devils began a four-match winless streak in the league, building on it with only one victory in six. All of that cost José Mourinho his job.

Ole’s at the wheel

Following Mourinho’s departure, United appointed ex-player Ole Gunnar Solskjær as caretaker manager until the club found a replacement. The plan was that his assistant at Molde, Erling Moe, would take care of the club until March (when the Eliteserien season began), which was when Solskjær would return to Norway with United having appointed a full-time replacement.

That plan was useless, though, as Solskjær’s boys started breaking Premier League records as they went unbeaten for 12 games until March, giving the Norwegian tactician the best-ever start in Premier League history, while also consecutively winning a club-record eight away matches.

United drew the likes of Juventus and Valencia in Group H of the Champions League, and despite only winning three matches, they qualified for the knockouts, in part thanks to Mourinho. There, a 2-0 home defeat to Paris Saint-Germain in the Round of 16 first leg severely jeopardised the Red Devils’ European campaign.

On March 2, 2019, Solskjær took an injury-hit United to Paris, with the likes of Alexis Sánchez, Anthony Martial, Paul Pogba, Nemanja Matić, Juan Mata, Phil Jones, Antonio Valencia, Jesse Lingard and Ander Herrera missing. What followed, though, was simply out of the ordinary.

A first-half Romelu Lukaku brace gave the Red Devils a lot of hope – they only needed to score once in the second period to advance despite Juan Bernat’s equaliser. However, they spurned a lot of chances, and the game seemed to be slipping away. That was until a VAR-awarded stoppage-time penalty for handball against Presnel Kimpembe was slotted home nervelessly by Marcus Rashford.

Rio Ferdinand was clearly a big fan of this.

Despite an FA Cup exit against Wolverhampton Wanderers following victories over Arsenal and Chelsea, Ferdinand had his way as Solskjær was awarded a three-year contract on 28 March 2019, having won 14 of his 19 matches in charge.

The wheels fall off

Solskjær celebrated his appointment as the full-time manager of United with a 2-1 win over Watford in the Premier League, but thereafter, things started to go downhill. United won just one of their last seven domestic matches, losing all of the last five.

FC Barcelona also saw to it that they didn’t get any further than the quarter-finals of the Champions League with a 4-0 aggregate victory.

2019/20 started with a bright 4-0 victory over Chelsea, giving the fans a lot of early hope for the season. However, this was followed by a terrible run of just one win in eight matches which saw the Red Devils drop all the way to 14th in the Premier League table.

Then came a very inconsistent patch where United beat the likes of Spurs and Manchester City back-to-back but suffered reverses against Bournemouth and Watford. An encouraging December where the Red Devils only lost one Premier League match saw them move up to fifth in the table, and things started to look a bit more hopeful all of a sudden.

Typically, though, this was followed by another poor run of form which saw Solskjær’s men win just one Premier League match in January, also getting knocked out of the Carabao Cup as they lost a two-legged semi-final tie against City.

The only good news (which was confirmed in December) was that United were easily through to the UEFA Europa League knockout stages.

Bruno Fernandes’ arrival at United coincided with their Carabao Cup exit, as he signed for the Red Devils on January 29, 2020.

His presence re-galvanised the Red Devils, who went unbeaten in the Premier League until it was suspended indefinitely owing to the COVID-19 pandemic, while also effectively securing a Europa League quarter-final berth with a 5-0 win over LASK in the round of 16 first leg.

Project Restart also went very swimmingly for United, who continued their unbeaten run in the Premier League with a run of four consecutive victories in between two draws from mid-June to mid-July. Elsewhere, they advanced in the FA Cup, reaching the semi-finals with a win over Norwich City. But, they lost another domestic semi-final, this time to Chelsea.

After constantly closing the gap to the top-four in the league, United finally entered the coveted region of the table on the penultimate matchday with a 1-1 draw against West Ham, booking a Champions League ticket for 2020/21 by beating Leicester City in their last match. This meant that they were unbeaten in the Premier League since Fernandes’ arrival, with the Portuguese international contributing to 15 goals in 14 appearances.

The Red Devils still had one more shot at a trophy, though, as the matter of the Europa League remained unresolved. After beating Copenhagen in extra-time of the quarter-finals, United once again succumbed to the last-four curse, as they were knocked out by Sevilla.

The start to the 2020/21 season for United was another terrible period, as they lost two of their first three Premier League matches once again, including an embarrassing 6-1 defeat to José Mourinho’s Tottenham. They won just one of the next three matches as well, languishing in 15th place after matchday seven (although they did have a game in hand). Now, Solskjær’s job was under serious threat.

The one positive during this period was their Champions League success – the Red Devils beat PSG away and RB Leipzig at home to secure a commanding lead at the top of the so-called ‘Group of Death’.

As United’s Premier League fortunes turned with four-straight victories, their Champions League fated started to head in the other direction, though, as they suffered a shock 2-1 loss against İstanbul Başakşehir in a match that produced this unbelievable piece of imagery:

However, a 4-1 win over the Turkish side followed to preserve their position at the top of their Champions League group,  meaning that they only needed a point from their last two matches to advance. Spoiler: they didn’t, as losses to PSG and Leipzig saw the Red Devils crash down to the Europa League.

Two draws against Manchester City and Leicester City slightly hampered United’s domestic progress, but an aggregate 9-4 win over Sheffield United and Leeds United in the middle of that took them up to fourthth.

Wins over Wolves and Aston Villa took them within touching distance of league-leaders Liverpool around the festive period, and the ‘Ole out ‘ brigade was firmly shut as the manager oversaw a decent 2020 considering the circumstances.

They did find some reason to resurface last week, though, as United once again lost a semi-final in the Carabao Cup to Manchester City, who were also looking very competitive in the league as they had two games in hand.

United were focusing on themselves, though, and finally, on the night of the 12th of January, 2021, a brilliant volley from the ever-divisive figure of Paul Pogba delivered them to the very top of the Premier League table through a 1-0 triumph – seven points clear of their noisy neighbours.

Even though the Red Devils are at the summit of the Premier League at the moment, scepticism is still very high as far as their title-chances are concerned. Next up for United is a crucial clash against Liverpool – one which will either cement their place as serious contenders or undo all of their good work till now.

The last three years have been turbulent to say the very least for United, but now, they are reaping the rewards of all of their hard work. The question is, are they good enough to battle the big boys once again?