07:00:00 – Skysports news’ transfer count down clock is flashing red – just 10 HOURS TO GO before the apocalypse! (or the end of trading, we forget which). Let the madness commence!

11:13:40 – Former England star Trevor Brooking is undergoing a check-up at his local GP’s – Could he be set for a return to the WEST HAM midfield? The Hammers could face competition from LIVERPOOL who are searching for an experienced replacement for Xabi Alonso.

11:34:15 – The agent of superstar striker Samuel Diyae admits the player is in the middle of a four-way fist-fight between MANCHESTER UNITED, REAL MADRID, BARCELONA and CHELSEA.

12:03:12 – Reports suggest MANCHESTER CITY have made a renewed £150million bid for CHELSEA captain John Terry. Terry has denied he instigated the rumours but is asking Chelsea to prove their loyalty by giving him a new contract. The England defender is anxious Chelsea show their ambition to conquer Europe by investing all their cash in him.

12:10:35 – Samuel Diyae’s agent says his client would favour a move to MANCHESTER UNITED OR BARCELONA.

13:01:43 – A number of Premier League players are said to have gone into hiding after Hull manager Phil Brown declared he was looking to sign four or five players.

13:59:01 – LIVERPOOL owners George Gillett and Tom Hicks are currently holding a high-powered meeting with manager Rafael Benitez at McDonalds at Edge Lane Retail Park. Witnesses say Benitez is on his knees begging for an increase in his allowance but the Americans are deep in conversation about the tough times economic times, American meat and the extraordinary value of the extra-value meal.

14:37:12 – Skysports news have taken to the streets to mix with the ‘real fans’ on this momentous day. But the streets are empty – where is everyone on this week day? Next stop the job centre and then the pub – thank god for the recession and early opening hours.

16:04:51 – Stoke boss Tony Pulis has denied the purchase of Carl Court was a ‘panic buy’, insisting that the club had been monitoring the former Wimbledon, Newcastle and Marbella striker for some time.

16:05:26 – Samuel Diyae has left Bristol City after failing to settle at his new club.

16:39:51 – Reports on Al Jazeera tv, who are running a simultaneous transfer deadline-day extravaganza (not to be confused with another of their count down shows), suggest Supreme leader of Iran Ayatollah Seyyed Ali Khameini could be considering a bid to takeover Newcastle. Khameini is likely to bring in his own man with President Mahmoud Ahmadinejad in the running.

16:42:05 – The FA have warned the Supreme leader of Iran that he will be subject to the same strenuous, rigorous tests that allowed Thaksin Shinawatra and Mike Ashley to breeze into the Premier League.

17:03:29 – Iran President, and Newcastle United first team coach, Mahmoud Ahmadinejad has vowed to bring discipline, honour and glory back to Geordieland. Ahmadinejad said among his priority would be to increase recruitment, bolster Newcastle’s firepower and stockpile a formidable arsenal in the next transfer window. Newcastle’s neighbours are said to be ‘concerned’ over the developments.

Note: None of the above is actually true, but it’s infinitely better than the boring fare dished out today.

Written by JMCL, who also writes at the Sporting Eye. 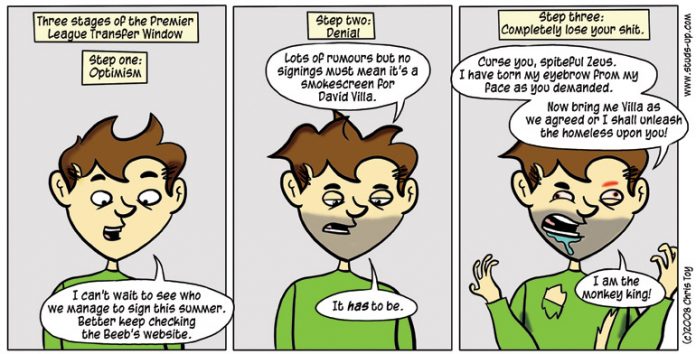 Studs Up – Chris ToyAnd finally, if you’re wondering who the lady at the top is, she’s Radka Kocurova. Enjoy.