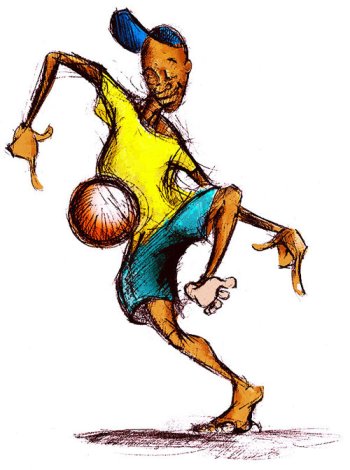 Ahead of tonight’s semi-final clash between Real Madrid and Barcelona, Real’s Brazilian left-back Marcelo has pointedly suggested that he prefers ‘to win and not play well’ over defeat (here’s a link in Spanish).

Hardly a statement of earth-shattering profundity in itself (then again, Eric Cantona’s sardine analogy aside, has a footballer ever said ANYTHING interesting in a press conference?), but Marcelo’s chest-beating battlecry ahead of one of the most hotly-anticipated Spanish football games of recent years is more than just a statement of intent. It sums up an increasing trend in Brazilian football away from the flair and ingenuity which made the golden shirt a symbol of  The Beautiful Game’.

Tonight, four Brazilians look set to be involved: Marcelo and Kaka for Real Madrid (whose Brazilian-born centre-back Pepe opted to represent Portugal at international level), and Dani Alves and Adriano for Barcelona. Yet how many of these players can be said to embody the creativity and instinctive alegria (‘joy’) we still associate with the Brazilian game?

Marcelo, Alves and Adriano are all nominally full-backs – superb full-backs whose attacking intent sets them apart, but full-backs nonetheless – and Kaka, though a playmaker, is the least likely of the four to start the game. Real-Barca is being billed as the great attacking football festival of the year, yet almost none of the flair and creativity on display will come from Brazil.

In truth, the country which produced arguably the finest display of attacking football the world has ever seen – the 1970 World Cup win – and which has since inspired awe across the world with its seemingly endless conveyor belt of footballing ingenuity and grace decided long ago to abandon the idealistic approach of their predecessors in favour of unbridled pragmatism.

After 1970, Brazil had continued to produce more players with sparkling technical ability per generation than most countries could manage in a century: Zico, Socrates, Falcao, Careca, Muller, Junior and Eder are but a handful of examples. Yet defensive naivity, stout opposition and plain misfortune prevented Brazil from winning another World Cup until an unfancied, pragmatic outfit beat Italy on penalties to lift the tophy in 1994.

Since the early ’90s, while steady production of world-class Brazilian players has continued, the ratio of attacking players to defenders has fallen significantly. This is to not say that Brazil no longer produces players who can play with real style; over the past two decades we’ve seen the likes of Rivaldo, Denilson (this one, not this one)and, of course, Ronaldinho burst onto the world stage.

Yet those three examples epitomise the tendency of Brazilian flair players to get phased out, systematically, by developments in the world game and by their own national team. Ronaldinho, in particular, demonstrates how the modern-day Brazilian flair player simply can’t survive in a game in which the intense physical and tactical preparation of players requires more than ‘just’ mind-boggling skill.

Whilst Ronaldinho’s laissez-faire attitude to physical conditioning would have made little difference in, say, 1982, he was excluded from the two sides – Brazil and Barcelona – which would, historically, have offered his vast array of abilities their spiritual home. It would appear that the demands of the game in the 21st Century make no exceptions.

The trouble is, Brazilian football appears to be abandoning flair altogether. It’s not as though a player can’t be allowed to play creatively, with freedom and intuition as well as brawn. Ironically, it’s Brazil’s Latin American neighbours and arch-rivals, Argentina, who have become Europe’s reservoir of attacking talent.

In addition to Lionel Messi, players like Veron, Tevez, Riquelme, Aimar, Di Maria, Saviola, Lavezzi and many more have flooded Europe with Latin American style – as well as substance. Brazil, while still capable of producing ruthlessly efficient goalscorers, like Luis Fabiano and the exciting young prospect Neymar, seems intent on reversing the ill fortune which plagued its beautiful teams of the 1980s. Instead of world-class playmakers and wingers, we are seeing more and more players whose game is based on muscular power, blistering pace and limitless endurance.

Brazil now boasts the most impressive collection of central defenders in the world, their 6th, 7th and 8th best options easily good enough to start for most national teams; the midfielders, lacking in flair, are often just as big and powerful as their defenders; and, as tonight’s match will show, Brazil is producing more attack-minded full-backs than ever before.

As Alex Bellos explains in his wonderful Futebol: The Brazilian Way of Life, Brazilians take winning seriously. Arguably the world’s most racially and socially diverse country, football is a unifying force capable of bringing a real sense of national pride to a contry which, whilst building  itself into one of the world’s biggest emerging economies, still suffers from immense social inequality. Huge infrastructural investments have seen the development of a huge series of football camps, designed to encourage the physical development of youngsters and to foster a winning mentality.

Often, this has come att he expense of the improvised street kickabouts which have encourages young players to develop ball control and skill intuitively. The result is more Julio Baptista instead of Socrates. But it’s also Lucio, Thiago Silva, David Luiz, Alex or Juan instead of, say, Junior Baiano. It’s Luisao over Luizinho.

Tonight, Barcelona’s blend of Spaniards and an Argetninian, the brilliant Messi, will once more try to showcase their brand of irrepressible passing, movement and skill, whilst Real Madrid will look to Cristiano Ronaldo, a Portuguese whose name tells us much about the legacy of Brazilian football in itself (though, bizarrely, he was actually named after Ronald Reagan), for goals. For inspiration and flair, they will look to Mesut Ozil…a German.