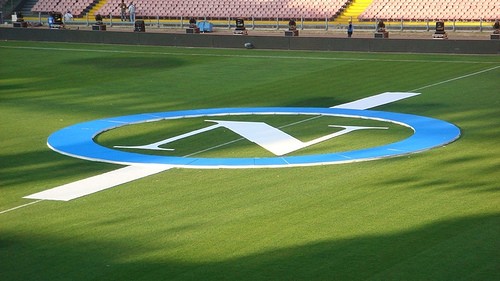 Società Sportiva Calcio Napoli is currently undergoing a renaissance that is relating to those glorious days in the eighties when under the spell of Diego Maradona’s magic that glorified a small unfashionable club into Scudetto winners.

The club now under the stewardship of Coach Walter Mazzarri is currently sitting in second-place, three points behind leaders Milan. Could one of Calcio’s most stunning comebacks be on the cards? A club who has endured so many traumas in the last fifteen years has a realistic opportunity to clinch its first league title in 21 years.

The club had a monumental fall from grace like no other as relegation soon followed following Diego’s departure. Many were left to turn to hindsight and ponder at what might have been had scenarios worked out differently. The club was dragged through the mire with bankruptcy as well as being on the verge of extinction until Naples native Aurelio De Laurentiis put his foot through the door and injected the club with the finances it needed to live. SSCN was reborn.

It was August 2004 and the club was declared bankrupt. The future of the Neapolitan’s beloved institution faced an uncertain future with the distinct possibility of it being liquidated. It was a far cry from the summer months in 1984 when they shook the football empire by luring Diego Maradona to southern Italy.

The greatest player on the planet had fell deeply in love with the Neapolitans and found his spiritual home. He ended an inconsistent two year stint with Barcelona that was shrouded with injuries and political differences with the then president Josep Nunez who continuously demanded the life and soul of the Argentine superstar. The pressure pot in Catalonia was too much for El Diego and his decision to move to a mid-table side that seemed to have little aspirations of challenging for honours was questioned. His presence was greeted by 60,000 strong Neapolitans who turned out to see his first training session. He captivated the city and gave the locals strength and hope. The political and cultural diversities between the clubs in the north and south had seen clubs like Napoli ridiculed for its poverty. Maradona’s heart, belief and desire gave the city new life as they began to contest with the giants of Calcio such as Juventus and Milan. Nobody could ever have dreamed of Napoli breaking into a monopoly with funded empires such as Silvio Berlusconi’s Rossoneri – it seemed to be a pipe dream.

Maradona’s debut season saw him bag 17 goals in 36 appearances but that wasn’t enough to make up for a mediocre season where relegation had been a distinct possibility – even with Diego’s name on the team sheet. The Argentine has admitted that he pondered his future on the odd occasion believing he should – and rightfully so – be contesting at the summit of football’s elite. However, he was perceived as a messiah by the Neapolitans, they believed in him and the feeling was more than mutual. Diego made his presence known and demanded the club to make changes and bring in acquisitions that were going to propel the Azzurri from a mid-table outfit to Scudetto contenders.

Fernando de Napoli (a fitting namesake), Ciro Ferrera, Salvatore Bagni and of course Careca were just a few of the acquisitions who aided in the development of the team in the mid to late eighties. Along with Maradona there was another significant arrival that turned the Calcio landscape on its head, the instalment of Ottavio Bianchi as coach in 1985 replacing Rino Marchesi. He brought an efficient nature to the club and gave them impetus to play an attractive brand of football.  He drilled his players with duties and tactics that would engineer wins. He was an Italian tactician who had an affiliation to the club as a former player. Therefore it was fitting that he brought the club its most glorious period of success in its existence.

He along with his players instigated the progress of the club in the 1985/86 season where they astonishingly finished in third place. Their northern counterparts were disgruntled by their progression and were even served a piece of humble pie as Napoli ended a 13 year hoodoo against Juventus by beating them 1-0 via a Maradona curler at the Stadio San Paolo. That without a doubt was a defining moment in the club’s history. Juventus were the heavyweights of Italian football and the unfashionable southerners stamped their mark at the expense of their northern counterparts – thus announcing themselves to the world. It can be argued that victory was more of a statement than the acquisition of El Diego, but of course had it not been for his arrival then history may never have been written.

The 1986/87 campaign is where football in southern Italy witnessed its most impeccable period in its history. Napoli – a club that was not supposed to be  taken seriously – became Scudetto winners. Partenopei had faced adversity on so many occasions and overcome it with the sweet taste of victory as the Neapolitans took to the streets of Naples in mass jubilation. The Azzurri became the first southern club to snatch the title away from the clutches of the northern giants. Not only that, they done the double by winning the Coppa Italia. It was three years of hard work and belief that culminated into the most beautiful year in the club’s history. More success was to follow on the European scene with the UEFA Cup but the realisation and the inaugural bow of becoming national champions was as sweet as it could get. The Neapolitan people could never have envisaged what transpired over the course of those three years which was seemingly sprinkled with magic stardust by El Diego. He became more than just a footballer in Naples, he became an adopted local, an ambassador, a messiah. Napoli’s name was etched into Calcio history. They were champions.

The Brazilian Careca and Maradona conjured up a telepathic understanding that was seemingly unbreakable. They were a delight on the pitch as they worked in tandem with one another orchestrating the play in the final third. Careca arrived in the summer of 87 and the club pushed on by clinching European glory with the UEFA Cup and another Serie A title in 1990 with Alberto Bigon as coach.

However the club gradually began to fall from grace. The departure of Maradona and the likes culminated into a domino effect as Napoli began to languish in mid-table throughout the nineties as they did prior to 1984. Financial constraints saw a lack of investment which resulted in the club being relegated to Serie B in 1998, having only won two games all season. They did gain promotion two years later but ended up going straight back down. This heaped more misery on the club as financial turmoil threatened to diminish its existence. Upon its bankruptcy the FIGC relegated the club to Serie C1 despite achieving safety in Serie B. If that wasn’t bad enough the club was robbed of its history. Società Sportiva Calcio Napoli was seemingly no more.

Aurelio De Laurentiis reacquired Napoli’s history in 2006 as he succeeded in getting the club’s name restored to Società Sportiva Calcio Napoli. The club was well and truly back on track under his ownership and the Azzurri got promoted to Serie B in 2006 before finally returning to the dizzy heights of Serie A in 2007 where they have gradually progressed in the last four years -now being on the verge of something special.

As we approach the month of March the club currently sits in second spot. A genuine Scudetto challenge is on the cards and with the president making investments into his squad, Napoli look more than likely to prosper. Upon their arrival back to Serie A in 2007, De Laurentiis made two of the shrewdest and prosperous transfers in recent times as he signed Marek Hamsik and Ezequiel Lavezzi who have both blossomed into integral figures in the club’s resurgence. Lavezzi has been likened to Maradona with the characteristics of his play mirroring that of his compatriot. As for Hamsik his prowess with the ball is exceptional and has the ability to conjure up a match winning moment. It can be argued that last summer’s acquisition of Edison Cavani has been the Serie A transfer of the season. He has already bagged 27 goals in 36 appearances for the club.

The coach Walter Mazzarri, with the backing of his employer, is assembling a real talented group of players who have technical ability in abundance. The signing of Victor Ruiz from Espanyol last month underlines the club’s ambition to contest at the top of Serie A. Not only are they presenting a worthy title challenge, it is becoming more realistic that they will qualify for next seasons UEFA Champions League. That would present a lucrative chest that could be used to take the club to that next level. Something Maradona felt they didn’t do upon their Scudetto success in 1987 and therefore missing a chance to clinch the European Cup.

The resurgence of one of Italy’s most renowned football clubs has been nothing short of miraculous. It was only seven years ago that the club seemed to have been suffocated by the stranglehold of debt around its neck. Now the infamous Naples outfit is on the verge of something quite special.