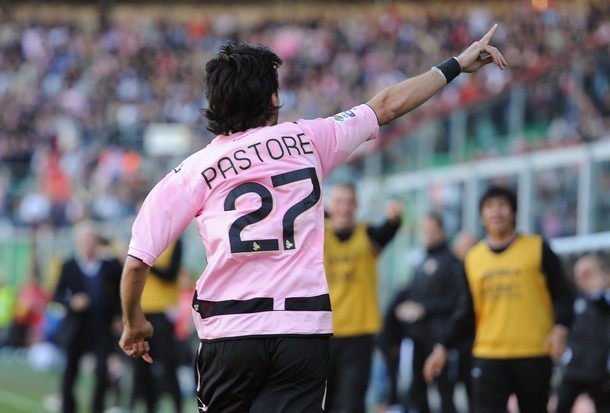 Javier Pastore is gradually making his way up the football spectrum as one of the games most talented players.

The Palermo man has been in star gazing form thus far in Serie A with his most recent display cementing his name in Sicilian folklore as he bagged a hat-trick against Catania last Sunday. That particular performance however can be argued at not being his best as he frightened the Juventus back line for ninety minutes back in September as he bagged a brace and delivered a famous 3-1 victory for the Rosanero in Turin.

It was that particular display which lead to a glowing appraisal from the club’s outspoken president Maurizio Zamparini who lavished praise on the young Argentine describing him as the new ‘Zinedine Zidane’. Such valiant acclaim for a young man who is developing week by week each time he adorns the pink shirt of the Aquile.

His elegance and aura on the ball is so unique – comparable to Kaka at Real Madrid – who Pastore has admitted to modelling his game on. There are similarities between the two, their stride on the ball, their intelligence and also their technical superiorities with a ball at their feet.

He is steadily making a name for himself in Serie A and is becoming one of the country’s most exciting imports. Italy is littered with technical flair and the young Argentine brings that in abundance.

Palermo pulled off a transfer coup by luring him to the Stadio Renzo Barbera after he endured a spell in his native Argentina with Huracan as they mounted a serial assault on the championship in 2009. He was already being mooted for moves to the likes of Chelsea and Barcelona but it was Zamparini who brandished his cheque book to swiftly acquire his service – and what a masterstroke it has been. In his debut season he contributed greatly to their fifth place finish in the league – agonisingly missing out on a Champions League spot to Sampdoria.

A huge amount of credit must go to the club’s coach Delio Rossi who has implemented his qualities into the team just behind a front two. After he took over from Walter Zenga in the fall of 2009 Rossi utilised Pastore in the first eleven unlike his predecessor and the club’s fortunes seemingly turned on a sixpence following that decision.

His performances last season lead to a surprise call up to Diego Maradona’s World Cup squad where he made a number of cameo appearances. Although Argentina were humbled in their quarter-final against Germany, Pastore has recently admitted that he developed  as a player whilst nurturing his confidence and self belief due to the experience in South Africa.

“I feel good and I’m happy. I grew up long after the World Cup. I’m back from the experience of South Africa with more serenity and more belief in my ability.” He recently told radio station, Radio Deejay.

He certainly has taken his game to a whole new level this term by turning potential into consistent productive displays for his club. Even Lionel Messi admitted to knowing little about his compatriot prior to their meeting at the World Cup – then admitted to being surprised and impressed with his team-mates ability.

Pastore is such a modest young man who plays as if he’s in a park with his friends each time he grazes the turf of pitches all across the peninsula. He may not even realise just how good he can be and if he continues developing his attributes in the same manner as he has in over the last twelve months then the world of football will have another superstar to drool over.

Sadly for Palermo fans it only seems a matter of time before he seeks pastures new with one of Europe’s heavy hitters. Real Madrid enquired over his availability this past summer and they continue to be linked with him along with the likes of Barcelona and Chelsea.

However until that day comes the Sicilian fans can continue to be enthralled with his scintillating displays – and long may they continue.