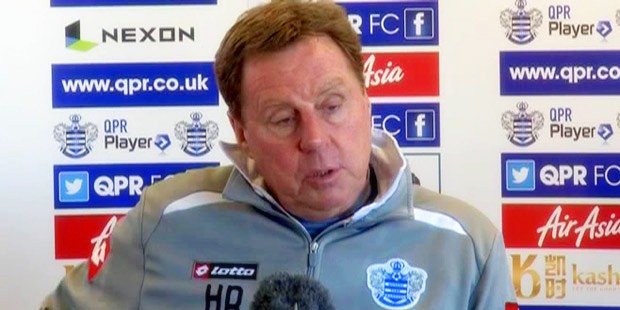 On Saturday lunchtime, Tottenham will be away at Loftus Road, playing Queens Park Rangers in what to the unobservant eye is a humdrum, not especially interesting fixture.

Scratch below the surface though, and there will be a huge conflict of emotions on both sides as QPR try to avoid relegation and Spurs attempt to avenge the horrors of last season and qualify for the Champions League.

That’s because Harry Redknapp, one of the most loved and most hated of managers in football today, now manager of QPR, will be against his former club, which under his management achieved breathtaking highs and crushing lows.

From victory in the San Siro against AC Milan, to Chelsea’s miraculous victory in Munich denying them the Champions League spot they so wanted, and which they would have qualified for in any other season.

Spurs had the best period in their history for at least 25 years under ‘Arry, perhaps more. And they did it with great players, attractive football and loyal support in the stands from fans who before had gone through more heartbreak than a smitten teenager who’s girlfriend has ran off with his best mate.

For the best part of three seasons, there was a happy, excited, at times positively euphoric vibe around Tottenham. Redknapp has to take a large share of the credit for that, and indeed in the press he talked about how the club had not had it so good for a very long time.

But that perhaps was the problem, and possibly is the reason why many Spurs fans remember Redknapp not as the man who took them into Europe but the man who ruined their chances of further European glory and was responsible for their devastating collapse at the end of last season.

It was the ubiquity with which he was in the media, always with a quote for the cameras and the microphones, that at first endeared him to fans after the car crash that was Juande Ramos’s attempts at learning the English language.

Which by the end had thoroughly alienated not just fans unhappy at every transfer target’s pros and cons being discussed at length by the manager but seemingly by Daniel Levy and the Tottenham board too. Over time, I believe Redknapp will be remembered with increasing fondness by the Spurs faithful.

When pure emotion will be less of a judging factor, the paroxysms of delight experienced by fans when Peter Crouch scored against Manchester City to secure Champions League football, when Crouch scored in the San Siro to help secure a magnificent win against AC Milan, when Roman Pavlyuchenko sealed victory against European Champions Inter Milan at White Hart Lane, will be what’s remembered.

It’s perhaps difficult to remember how low confidence was around White Hart Lane was when Redknapp took charge. Spurs had the (now) almost mythical two points from eight games, Dimitar Berbatov had sulked his way out of Tottenham at the start of that season and the club had become a laughing stock.

The popular joke at the time was that a cocktail stick had as many points as Tottenham. To the sound of neutral fans laughing at a team that a few months earlier had beaten Chelsea at Wembley to win the Carling Cup, Redknapp was given the Lillywhite reins.

There followed three and a half seasons of almost non-stop success. His first full game in charge was the 4-4 draw with Arsenal, two goals in injury time seeing a totally outplayed Spurs come back from 4-2 to draw 4-4.

Spurs fans the world over launched into an instant attempt to break the world standing jump record when Aaron Lennon bundled home the equaliser. Spurs simply didn’t score goals in added time to draw with Arsenal. But under Harry, they did it.

Spurs simply didn’t challenge for the title and consistently play some of the best football in the country. Under Harry, they did it.

It was perhaps the strength of feeling generated by the success that meant the vitriol was so strong towards Redknapp when the failure came. He was never as popular with the Spurs faithful as the press would have their readers think.

His constant media appearances endeared him to the press pack but irritated fans who grew to be tired of how things were never his fault, how he never rotated his squad, how tactically he was poor, how he was forever talking about players of other teams with regard to transfers, how he would quite selfishly promote himself rather than promote his employer, how he would say one thing one week and then say the opposite the next week, even how he always referred to the team he managed as ‘Tottenham’ rather than ‘us’ or ‘we’.

Very few managers are universally popular though. And given the success he’d had with Spurs and the non-stop praise he received from the press, he had more than enough support from the supporters and the club. While perhaps never loved, he was certainly liked and respected.

But then, with Spurs on the verge of a title challenge with 45 points from 20 games, the wheels started to not just fall off the bandwagon but explode and set the wagon on fire.

There was the trial which saw Redknapp spend two weeks in court, in serious danger of going to prison. Then on the day he was acquitted, Fabio Capello resigned. Suddenly, from being on trial in court, Redknapp was favourite with the press and the bookmakers to become manager of England.

Redknapp then fatally prevaricated. He didn’t declare his interest in the England job nor say he didn’t want the position either. This confusion didn’t help him or the team, giving the impression he wanted the England job but was too scared to do so.

On the pitch too, an exhausted Spurs were collapsing fast. Losing 3-2 to Manchester City at Eastlands to a last minute Mario Balotelli penalty was crushing.

Balotelli should have been sent off for a stamp on Scott Parker while Spurs had come back superbly from 2-0 down to get back to 2-2 and miss a sitter in injury time, when in shades of Gascoigne in Euro 96, Jermain Defoe stretched desperately to poke the ball home but couldn’t reach far enough.

City went down the other end and scored. Ledley King, one of the greatest defenders in Tottenham’s history, brought down Balotelli for the penalty.

King never recovered. A few weeks later, with Spurs leading Arsenal 2-0 in the North London derby having been 10 points clear in the league table before the match, they collapsed. Arsenal scored five goals in twenty minutes either side of half time.

Chaos on the pitch was abundant. And that was before Redknapp, with the score at 2-2 at halftime, made a double substitution which created even more of a mess. The effect was similar to throwing a lighted match on to an already fierce fire.

Arsenal scored thrice more, with King, for so long the master defender, hobbling around the pitch, unable to stop opposition players flooding past him.

By now, Spurs were playing terribly. Players were exhausted from never being given a game off. The tactics remained were terribly static for a team which garnered only six points in a nine game spell.

Redknapp, wanting a contract extension, in the press went from saying “I don’t go running to the chairman for a contract” one week to “you don’t let managers run into the last year of their contract if you think they are any good” the next, while hiring controversial agent Paul Stretford to represent him.

Chelsea smashed them in the FA Cup semi-final, giving an already battered and bruised team another vicious kicking.

By the season’s end, Spurs had finished 4th, below Arsenal, after leading them by ten points in February. This collapse and the manner of it left Redknapp hanging on the cliff face by his fingertips. Chelsea’s Champions League victory, denying Spurs Champions League football, pushed him off. Redknapp was promptly sacked.

Now, on Saturday, he returns to see the old friend he fell out so spectacularly with. It won’t be easy for either party, both whom feel a mixture of love and loathing for the other.

Many Spurs fans, fearful of the gloating from the Redknapp supporting press and perhaps angry at the rough treatment Andre Villas-Boas has received so far, will hope to smash the hummingbirds out of Queens Park Rangers. Others will applaud Redknapp with more relish than which they will applaud Villas-Boas.

Redknapp’s loved by the press. You’d think he was universally adored if you regularly read the tabloids. On Saturday, we’ll truly see how liked he is.