It doesn’t matter where Jose Mourinho goes these days, there always seems to be someone lurking in the dark (most likely a journalist) that’s ready and willing to jump out and make a story out of the Special One.

Consider for a minute the encounters in the past between Sir Alex Ferguson and Mourinho when he was at Chelsea. The verbal mind games between the two managers were epic battles for survival that neither wanted to lose.

So when Inter drew United in the knockout stage of the Champions League, most figured the handshake and chat between the two could potentially be the biggest story of the enounter. Mourinho’s exit stage left after the first-leg without even acknowledging Ferguson added even more fuel to the fire.

Forget the match at Old Trafford — everyone wanted to see Fergie spit flames and tell the Inter manager off after the second-leg! At least that’s what fans were hoping for.

But when the two met after the match and shared a laugh, everyone seemed to scramble for some story, any story to get Jose on the front page of their daily paper. And lo and behold, The Guardian (and every other British paper) gave us the gem we’d been looking for courtesy of Jose Mourinho and his golden fist of fury:

Greater Manchester police are investigating an allegation of common assault against Jose Mourinho following last night’s Champions League tie between Manchester United and Internazionale at Old Trafford. It has been alleged that the Inter manager punched a supporter close to the Inter team bus as he left the stadium following his side’s 2-0 defeat. The fan, who has not been named, later went into Stretford police station, close to Old Trafford, to report the alleged attack. (The Guardian)

Jose Mourinho knows how to punch?! I knew he was a fairly good slapper, but I’ve never taken him for a middleweight boxer.  The story has since been refuted by Inter and most likely will quietly go away, and to be honest, I’m not sure I’d be quick to believe a Manchester United fan who walked into his local police station claiming he was just hit by the Special One. I’d imagine it was just another fan trying to get the Mourinho in hot water once again.

So if the story is fake, why in the world would the national media run with something like this? That’s a really good question. If there’s one good thing that can come from this story, it’s the chance to look further into a burning question that’s been boiling up inside of me for some time: Why do we love to hate Jose Mourinho?

If you look at back at his track record with fans and managers alike he’s found a way to alienate almost every single group he’s ever encountered. Rafa Benitez, Arsene Wenger and Sir Alex Ferguson could attest to that; and you can definitely add Juve’s Claudio Ranieri to that list since he moved to Seria A.

Supporters? They can’t stand him when they’re playing against him. Liverpool supporters were incensed when he put his finger to his lips in a shushing gesture during the 2005 Carling Cup match after an equaliser. Countless other groups have also wanted to rip his head off and put it on a stake for all the see for various other things he’s done. But I promise you if you had the chance to corner any supporter and ask him if he’d take Jose as his manager, you’d most likely get, ‘in a heartbeart,’ as your response.

Mourinho is probably the most polarising manager we’ve seen in some time. He’s the type of person we love to hate because he’s everything we want in our manager, but at the same time, has all the traits we loathe in the opposition. His perfectly coiffed hair and his impeccable clothing give us the perfect target to bash his looks.

And how about his unfiltered mouth? There have been plenty of occasions where we’ve been blown away by his comments about opposing players or managers. The comments leave us with our mouth agape wondering if he really made that comment.

Learn to love the man

He has an ability for giving managers mental fits with his mind games — but for some reason the mind games, the quotes and his perfect clothing leave us wanting more. In the end I think we love it so much because it gives us another reason to hate the Special that much more. The fact of the matter is, is that we need villians like Jose in the game of football. They make the game worth watching and waiting for in a society where money seems to rule with an iron fist.

So who cares if the guy ticks people off on occasion;  in the end we all know that he’s doing it for us and for the good of the game.  So learn to love and hate Jose at that same time. You’ll be glad you did. 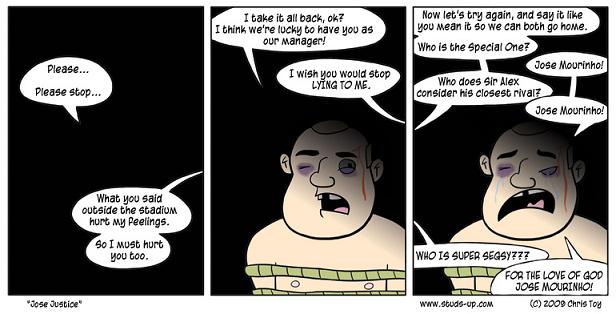