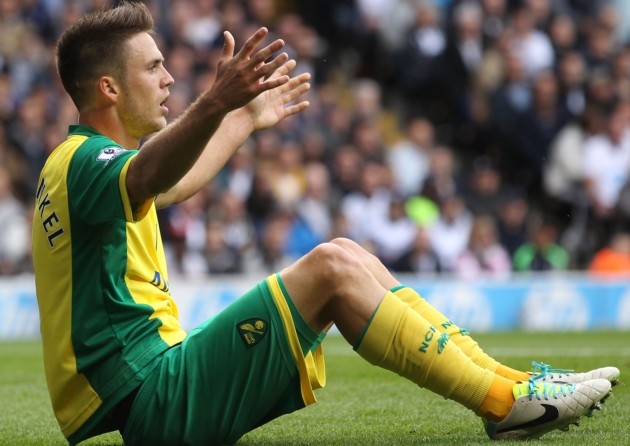 In March 2013 Ricky van Wolfswinkel was a man on the move in every sense. Norwich City had just forked out a club record fee for his services, a deal they were so anxious to conclude that they didn’t dare risk getting gazumped in the summer.

Even before van Wolfswinkel had even set foot in Norfolk shirts bearing his name were being demanded in such quantities that the club had to “pre-announce” his squad number before they actually knew who else might be in the team, apparently as oblivious to the concept that that they might need to sign some other players as they were to the potential screen printing losses. His boy-band looks made him the club’s immediate poster boy and his sinewy frame found him space in the number 9 shirt which had seemingly encased Grant Holt for the previous three seasons. 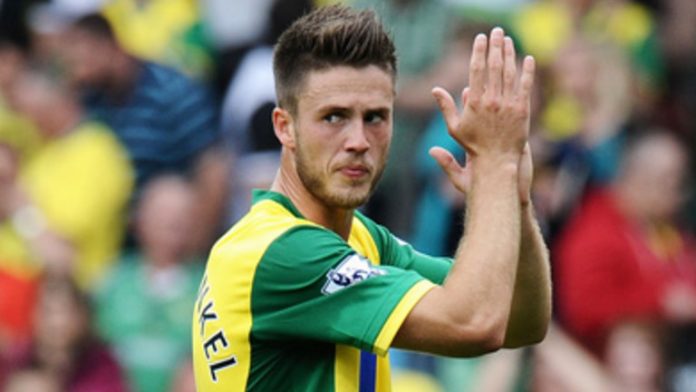 Van Wolfswinkel replacing Holt was more significant than your usual end of season upgrade. The unflinching Holt had dragged Norwich City from the bottom of League 1 to successive top twelve finishes in the Premier League, first under the vigour of Paul Lambert and then the discipline of Chris Hughton, whilst also taking the personal accolade of Player of the Season three times. Nevertheless, Holt, all elbows and antagonism, was a relic of the dirty work that had gone before. Van Wolfswinkel was the gleaming embodiment of Norwich announcing their arrival in the big time.

The excitement about van Wolfswinkel’s arrival was well-justified. His previous two seasons at Sporting Lisbon had yielded 45 goals, including nine in the Europa League and a call-up to Louis van Gaal’s Dutch squad. Indeed, he had such a golden touch that he was even keeping his in-laws happy, with his father-in-law, a certain Johan Neeskens no less, preaching his virtues to the willingly-converted in yellow and green.

Van Wolfswinkel’s career at Norwich started in a reasonably promising fashion. He scored a fine goal on his debut at home to Everton, which was enough to naysay the concern that he only touched the ball on six further occasions during the entire game, the first of many unwanted “since records began” distinctions that were to come his way. However, his ability to keep away from the ball gradually became seen as one of his few redeeming features.

As his season and that of his team failed to build on a promising start, Chris Hughton’s solution was to retreat into an ever more defensive shell and to prefer the more robust yet equally impotent Johan Elmander as his solitary striker. Elmander’s uncanny resemblance to the now-departed Holt, served only to endorse the feeling that van Wolfswinkel had already been written off as a failure and it was time to go back to playing the sort of proper grown-up striker that we had in the first place.

The remainder of Van Wolfswinkel’s first season in the Premier League didn’t produce another goal and ultimately ended in relegation. His season was typified with the game which ultimately proved to be crucial in relegating the canaries with four games to go.

Caretaker Manager Neil Adams gave van Wolfswinkel a surprise start in his first game against Fulham, in the ultimately misguided hope that it might have just been Hughton’s fault all along. With Norwich losing in the second half, van Wolfswinkel found himself unmarked inside the Fulham penalty area, with an opportunity to belatedly make everything all better again.

Yet when the moment came, he approached the goal with all of the trepidation of a child meeting a drunken Santa. It was palpably all just too much for him and he visibly crumbled under the weight of the preceding 27 games, and rolled the ball back to a team-mate who only he had imagined. Such was the lunacy of the “Ghost Pass” (yes, it even has its own name) has been viewed on YouTube 79,000 times.

It tells you everything about the enduring perception of van Wolfswinkel that a barely a quarter that number have bothered to see his solitary goal in yellow and green. By the time he returned for pre-season training he had been banished to the number 20 shirt, screen printing special offers presumably not required. Even when he did ultimately find the net again, even that served only to provide further humiliation, as if having Braintree Town fans sarcastically applaud you scoring in a pre-season isn’t already recognised as a footballers death knell then perhaps it should be.

Last season, his crop was a comparatively bountiful six goals whilst on loan at St Etienne in Ligue 1, yet their interest in signing him permanently waned once they had to show the colour of their pre-agreed 6 million Euro. Once again, Van Wolfswinkel has not found the net since December and completed 90 minutes only three times in 2015, failing to unseat former Leeds striker Max Gradel in the pecking order, and thus suffering the footballing equivalent of having domestic trouble at home and then not being able to have much of a holiday romance either.

With hindsight, there is the obvious suspicion that van Wolfswinkel simply never had the necessary ability to bridge the gap in quality between the lesser European leagues and the Premier League. He wouldn’t be the first. For every Ruud van Nistelrooy there is a Mateja Kezman, who followed his 35 goal golden boot season with PSV Eindhoven in 2004, with precisely four for Chelsea the following season, whilst being more notable for contriving to miss sitters from a succession of seemingly straightforward positions.

Van Wolfswinkel was perhaps also symptomatic of a player who simply struggled to find the mental fortitude to arrest the first significant decline in form in his career. He’s not the first decent player to do a remarkable lasting impression of someone who’s actually a bit pony. For example, there wasn’t much in Diego Forlan’s first 26 barren games for Manchester United to suggest that he would one day have a pair of European Golden Boots and a World Cup one to keep as a spare.

Neither is it van Wolfswinkel’s fault that he was denied the opportunity to put it all right. Such is the financial division between the Premier League and the hoi-polloi of the Championship that Norwich couldn’t afford to keep him on a reduced income. Therefore, he falls into the peculiar modern-day void of only being financially viable in a league that he’s already proven he’s probably not good enough for.

For the second summer in a row, van Wolfswinkel therefore finds himself in football’s dating agency, talking a good game and vowing to change. There has been a significant dearth of potential suitors thus far. It is often said that a good player cannot become a bad one overnight. Unfortunately for Ricky, it’s a slower and much more painful process than that.