In an era in which Lionel Messi and Cristiano Ronaldo have created one of the all-time great contests for the label of ‘world’s best footballer’, it is easy to forget that Andres Iniesta would be the best player on the planet on many other occasions in history.

Get the latest betting odds for Barcelona and Spain at sportbonusowy.pl/kod-promocyjny-sts.

At 28 and at the peak of his powers, the Spanish maestro is in the form of his life.

A product of Barcelona’s La Masia academy, Iniesta was pencilled in as a future great from a young age. In the Nike Premier Cup in 1999, Iniesta captained Barcelona’s Under-15s to victory, where he scored a late winning goal in the final and was named player of the tournament.

His eye for the dramatic is something that he has taken with him from youth level to the present day.

When Iniesta was 16 years old, Pep Guardiola and Xavi were watching him in action when Guardiola famously turned to his young teammate and announced:

That’s how good he was.

Since his Barcelona debut a decade ago, Iniesta has made 425 appearances, scoring 44 goals and creating many, many others. Deployed either centrally or as a drifting left sided player, Iniesta has everything a world-class midfielder can ask for: vision, skill, dribbling, a turn of pace, incredible balance and an underrated work-rate.

In terms of elegance and class, only Zinedine Zidane rivals him in the modern era. Although the likes of Messi, Zidane and both Ronaldo’s are, ultimately, slightly better players, nobody over the last 20 years has made football look easier and more graceful than Iniesta. 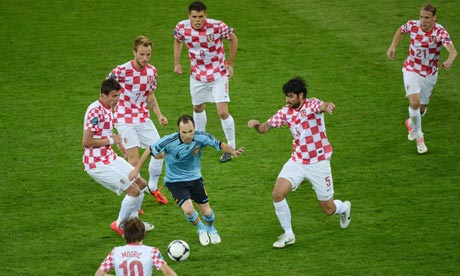 Some players have all the talent but lack that winning mentality and hunger to succeed, but Iniesta has proved time and time again that he is a born winner. His achievements for both club and country are exceptional.

He has won the World Cup and two European Championships back-to-back with Spain, while at Barcelona he has five La Liga, three Champions League, two Copa del Ray, two Club World Cup, two Super Cup and five Spanish Super Cup titles to his name. It is frightening to think what he will have won by the end of his career.

In terms of individual recognition, he has been named in the best XI for the last three major international tournaments, including the best player award at Euro 2012 earlier this year. His performance in the final against Italy was particularly phenomenal.

He has consistently been in the running for both the FIFA World Player of the Year award and Ballon D’Or for a number of years now, only for Messi to win it three times in a row. He also won the UEFA Best Player in Europe award in the summer, as well as many other more minor domestic and international awards over the years.

Although it’s a cliche, individual awards do not mean a huge amount to Iniesta, and his terrific teamwork and likeable personality on the pitch make him even more popular with fans.

While Ronaldo is very much a player who would rather score a hat-trick and lose 4-3, the team comes first with Iniesta, something Barcelona drill into their players from a very young age. 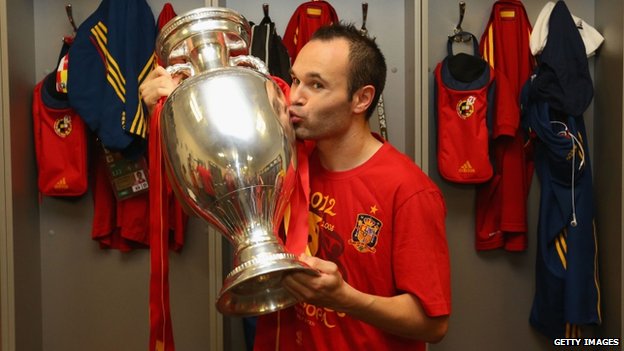 Having played second fiddle to the likes of Ronaldinho and Deco in the mid 00s, Iniesta came to prominence on a wider scale after a superb display in a friendly between England and Spain at Old Trafford in 2007. He ran the show and scored a wonderful winning goal, and from that point on he became a household name.

When Ronaldinho and Deco left Barcelona in 2008, Iniesta became one of the key men in the side, and his artistry and vision thrilled audiences worldwide.

In the four years since he has been a vital part of arguably the greatest club side in the history of the game, and many feel there has never been a more talented, effective midfield partnership than Iniesta and Xavi, a player whose tag as ‘the greatest Spanish footballer of all time’ is under more threat than ever from Iniesta at the moment. 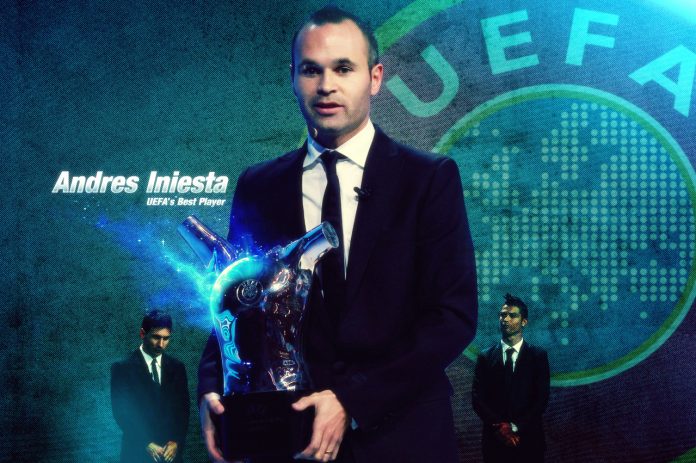 In 2009, prior to Barcelona’s dismantling of Manchester United in the UEFA Champions League final, Alex Ferguson spoke in glowing terms of Iniesta:

“I’m not obsessed with Messi, Iniesta is the danger. He’s fantastic. He makes the team work.

The way he finds passes, his movement and ability to create space is incredible. He’s so important for Barcelona.”

Following the game Wayne Rooney was adamant that Iniesta was the world’s best player. Considering the game had been billed as ‘Messi vs Ronaldo’ for weeks, for men of the stature of Ferguson and Rooney to make such statements proved how highly the greats of the game regarded Iniesta.

The performance of him and Xavi in that final was something to behold.

The truly great players effect the biggest games, and Iniesta ticks this category. When he eventually hangs up his boots the defining moment of his career will, inevitably, be the winning goal in the 2010 World Cup final, but there have been many other great moments too.

His last-gasp strike at Stamford Bridge in the semi-final of the Champions League in 2009 was one of the most dramatic goals in recent memory, and the ability he showed at such a vital moment was unforgettable.

He might not score many goals in big games, but the number of memorable assists in huge fixtures are endless. From El Clasico‘s to Cup finals, Iniesta invariably produces that little bit of magic that other players can only dream of doing. 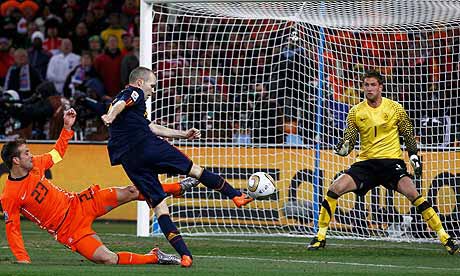 With this years Ballon d’Or winner set to be announced next month, there have been many calls from players, media and fans backing Iniesta to win the award for his outstanding performances in the summer.

Messi will win it, and although it sounds ridiculous to argue against a player achieving the things Messi is at the moment, Iniesta would be a very popular winner. Surely he will win it one day.

From his debut in 2002 to Barcelona’s 4-1 win over Atletico Madrid at the weekend, Andres Iniesta has bought great joy to his millions of admirers around the world for a decade now.

He is at the absolute peak of his powers, and it is important we appreciate this gem of a player before his genius is on the wane.