Here’s a look at the teams and people who deserve to be nominated as the best performers of 2008. See our list and then suggest your own ‘winners of 2008’ at the end.

This man has to be the biggest winner of 2008. Nobody else comes close really. Let’s look at what he has won during the year.

I don’t think I have to say anything else do I?

A third place finish some eighteen points behind Real Madrid, coupled with a disappointing Champions League exit at the hands of Manchester United added up to a hugely poor 2007-08 season for Barcelona. It meant the end of Frank Rijkaard’s reign and a new beginning for the Club with the likes of Ronaldinho moving on.

Many people were surprised by the appointment of Reserve team manager and former playing legend Pep Guardiola and early results and performances seemed to support that surprise. However six victories of five or more goals and some quite wonderful performances from the team seem to have established Guardiola as a managerial hero as well.

In Europe, the qualifying round proved a formality and the fact that they topped their qualifying group undefeated seemed to go unnoticed in England as we all talk about which one of our four teams is going to win the tournament this year!

The year has got a whole lot better at the Camp Nou and I have a feeling that 2009 might be even better. 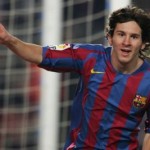 If this little genius had been fit for the whole of the year there is no doubt that he would have gone toe-to-toe with Cristiano Ronaldo in the player of the season awards.

Not since the great Diego Maradona have I seen a player who glides with the ball so effortlessly and terrorises defenders quite so much. He might not have won quite as much as Ronaldo but to be runner up in the Ballon d’Or, picked in the FIFPro world XI and win an olympic goal medal isn’t bad!

All he achieved was despite picking up an injury ruling him out of some of the season at a crucial time.

Both Pele and Maradona himself have said that Messi may be the best in the world. Recommendations don’t come much more highly than that. If they think he’s good then that’ll do for me! 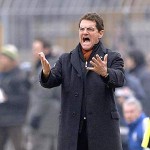 The side that looked so disjointed and dispirited under that buffoon Steve McClaren suddenly look like a disciplined and reasonably talented football team.

The 4-1 win in Croatia together with comfortable wins over Belarus and Kazakhstan have made him a national hero already. OK, it isn’t quite the same as beating Italy, Brazil and Spain but it’s a start!

The fact that he calls the England players by their surnames and demands that mobile phones are not used and demands that the players eat together and, best of all, has put a ban on the WAGS, all go towards making Capello one of my favourite people.

Obviously, should we not win the World Cup I will join the English press in absolutely destroying the man and saying that I knew all along that he wasn’t the man for the job! 🙂 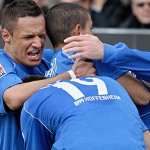 It is difficult to know where to start with superlatives about what this German club have achieved. The club was only formed in 1945 and up until the 1990s they were an amateur side playing in the eighth tier of German football.

By 1996 they had progressed to the fifth tier and then in 2000 another promotion followed. Remarkably the club stayed in the fourth division for just one season and the 2001-02 season saw them competing in division three.

The club made it’s very first appearance in the German Cup as recently as 2003. That gives an idea of just how meteoric their rise has been. The 2006-07 season saw the dream almost complete when promotion was earned to 2 Bundesliga but their promotion to the Bundesliga in their first season at that level surprised even themselves.

From Amateur to Bundesliga in fifteen years. From fifth tier to top tier in eight years. They would be bound to struggle wouldn’t they? Not a bit of it. They are battling away at the top of the table with European football within touching distance.

If Hollywood produced a film about the club, nobody would believe that it was realistic!

Manchester City deserve a mention because how can any club that comes into a five hundred billion pound fortune be described as anything other than winners?

Sir Alex Ferguson deserves a mention because the grumpy old git has done it again. After being written off by many, he has created an all new Manchester United team that has emulated their 1999 predecessors by winning the Premier League and the Champions League.

Hull City deserve a mention like Hoffenheim. They have started their first ever season in the Premier League with a style and success that few could have predicted. Their rise hasn’t been quite as spectacular as that of the German side but eight years ago, Hull were in the fourth tier of English football and very close to going out of business.

Who do you think the biggest winners of 2008 have been?