The performances of the North African national football sides in 2011 have reflected the political actions of the Arab Spring.

The failure of Egypt, the champions of the past three tournaments, to qualify for the 2012 African Cup of Nations (ACN), alongside the absence of regional heavyweights Cameroon and Nigeria, has thrown the tournament wide open.

Egypt’s campaign in particular was a shambles, with defeats to Sierra Leone, Niger and South Africa in the final qualification stage. But 2011 has not been an ordinary year in North Africa. With Egypt’s revolution beginning on January 25 2011 and the Arab Spring in full flow, one could be forgiven for thinking the instability in the country could not have helped its football team, particularly given the continuing uncertainties moving into 2012.

However, the list of qualifiers for the African Cup of Nations has thrown up a number of surprise names, not least Libya and Sudan, as well as (less surprisingly) Tunisia and Morocco. While Tunisia were tournament winners in 2004 after beating Morocco in the final, Sudan have made little impression on the tournament since they won the competition in 1970. Libya has hardly ever registered in African football consciousness, a runners-up spot in 1982 notwithstanding. Alongside Algeria (who just missed out of qualification), all these nations have had significant upheavals and protests during the Arab Spring and in the case of Tunisia, Libya and Egypt, regime change. 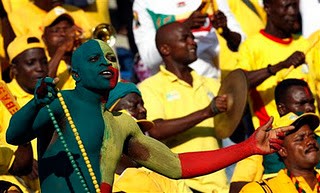 The 2010 African Cup of Nations in Angola, won by Egypt. Source: me_studio

It seems implausible that national footballers can remain unaffected by such political turmoil. With national football teams so often projected as a symbol of the nation; and aggressively so in the case of some North African states, could there be a link between the nature of political action and performances on the football field? Is there a case to make that powerful nations can be rocked by revolutions, but smaller and weaker nations can be emboldened and united by them?

So how have these six North African nations fared since the outbreak of their particular versions of the Arab Spring in the past year?

By collating the results from all matches (both competitive and friendly) since the beginning of the Arab Spring political action in each nation and comparing these results against performances from the previous 12 months (or at least eight games in the case of Morocco and Libya to ensure a fair sample size), it seems abundantly clear that almost all of the North African sides, with the dramatic exception of Egypt, have improved their results in terms of average points per match (see table below).

Apart from Egypt, 2011 has been a fantastic year for North African football

Taken as a whole, these six nations have competed in 53 matches since the start of the Arab Spring, gaining 87 points, with a 45% win ration and an average of 1.64 points per match.

In the 12 months prior to the Arab Spring (or at least eight matches stretching back into 2009 for Libya and Morocco), these same six nations contested 60 matches, but only won 79 points, with only a 33% win ratio and just 1.32 points per match.

Whilst a trend is clear, it is important to look at each country more specifically.

Egypt appears to be the exception to the rule. The country was arguably, up until 2011, the most successful team in African football during the past decade with an unprecedented three straight ACN crowns, boasting seven titles overall and have qualified for every tournament since 1982.

Although the Pharaohs had not begun their qualification campaign well, in the 12 months between their 2010 African Cup of Nations victory and the Egyptian revolution, they were boasting an average of 2 points per match including five straight wins in January 2011. This is even discounting their January 2010 ACN success, which featured 7 straight wins against high quality opposition, and would raise their points per match to a phenomenal 2.39. Their evident fall from grace has been staggering.

Since January 25 2011, Egypt have picked up one solitary win and one draw from five matches, with defeats to South Africa and Sierra Leone ensuring they finished bottom of their qualification group.

The Egyptian revolution was notable for the unity of the population in throwing off the power of President Mubarak. Indeed there was apparent cooperation in protest organisation between the fans of the rival Egyptian teams Al-Ahly and Zamalek, with the latter long regarded as a pro-government club during the Mubarak era. The only public backing to the regime came from a few club managers and Egypt’s national coach Hassan Shehata rather than fans or players.

While the other North African nations move towards new democratic regimes or have gained significant concessions from government as a result of their protests, the future for Egypt appears more convoluted and strained, demonstrated by recent protests against the interim military rulers. The ensuing instability of the post-Mubarak Egyptian nation has been echoed by poor performance on the football field.

This however, is not the general trend. Morocco, Algeria, Sudan and Tunisia have witnessed significant performance improvements since the Arab Spring, while Libya has maintained its strength overall, but has improved dramatically in competitive qualification matches.

“This is for all Libyans, for our revolution”.

So said 39-year old goalkeeper Samir Aboud upon Libya’s astonishing qualification for the 2012 African Cup of Nations, after a draw against Zambia put them though as a best runner-up. 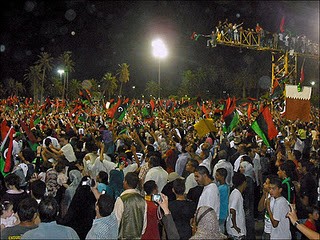 Libyans turn out in droves to watch their side play Mozambique in September. Source: Magharebia

Despite a recent poor run of friendly results, the Libyans are unbeaten in competitive matches since the revolution against Col. Muammar Gaddafi, notching up two wins and two draws to round off a qualification campaign that saw them go unbeaten and concede only one goal.

For a team that was significantly affected by an ongoing civil war, it was an astonishing achievement. Playing on neutral territory with a new flag, strip and anthem, coach Marcos Paquetá summed the mood up by stating the team was now “not only playing for football success but for a new government and a new country”. Even more so when you consider Col Gaddafi’s son, Saadi, ran the Libyan Football Federation and was once captain of the national team. The team had been a symbol of the regime.

It has certainly not been smooth sailing. Former star playmaker Tariq Ibrahim al-Tayib was notably absent from recent matches, following pro-Gaddafi outbursts including reference to dead rebels as dogs and rats. During the conflict there were reports of 17 figures from Libyan football, including four who claimed to be members of the national side, turning up in a rebel-held town and announcing themselves as opponents of the regime.

One of them, Adel bin Issa, the coach of Tripoli’s top club al-Ahly where Saadi Gaddafi used to play, announced he had come “to send a message that Libya should be unified and free”, and he hoped “to wake up one morning to find that Gaddafi is no longer there.”

The new Libyan side, made up from players from all parts of Libya, has the potential to become a powerful new unifying force post-revolution. Their performances thus far and qualification for the African Cup of Nations may represent a good focus for new beginnings as the new nation moves into 2012.

The statistics show that Tunisia, Morocco, Sudan and Algeria have all experienced far better results in 2011 since the beginning of their respective protests or in the case of Tunisia, regime change, as compared to the 12 months preceding the Arab Spring.

Algeria, where protests led to the lifting of a 19-year old state of emergency, had a forgettable 2010, losing 8 matches and achieving an average of 0.86 points per match. Yet in 2011 Algeria won three of five matches and ended qualification on a high, only losing out to Morocco.

Even Morocco, which experienced smaller protests but significant political concessions, saw their performances improve from 1.25 points per match in 2010 to 1.75 in 2011 and finish top of their qualification group. 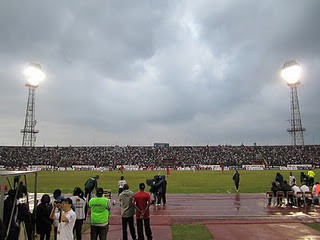 Sudan, in a year when the country has experienced protest, violence and division with the breakaway of South Sudan, also qualified as a best runner-up behind Ghana in their ACN qualification group. Having played a large number of matches this year, a win ratio of 53% and a points per match of 1.79 is a huge improvement on 2010’s 25% win ratio and 1.13 points per match.

Finally Tunisia, the standout model of the Arab transition to democracy, also saw an improvement in performance from 1.27 points per match in 2010 to 1.75 in 2011 and a comfortable qualification behind Botswana.

“The events at home really stimulated our team and we believe that the players felt greatly liberated after what happened,” (Esperance coach Nabil Maaloul)

While the Tunisian national team were qualifying for international competition, leading Tunisian side Esperance were winning the African Champions League. Players were keen to invoke synergies between revolution and victory on the pitch, with defender Khalil Chammam stating: “One positive thing from the revolution was that, although we suffered a lot, those changes and the suffering made us stronger -mentally and physically.”

As in Egypt and Libya, Tunisian football suffered direct interference politicians before the revolutions. It was no surprise that in all three cases; national leagues were shut down upon the breakout of protests against the regimes. The majority of Libya’s squad was home-based, where league football was suspended in March, while six others play in neighbouring Tunisia, where the league has only recently resumed. It is impossible to separate the fate of national footballers from politics when the impact is so great.

The paths of the North African national sides have not been universally similar. Instead they have in fact tended to replicate the upheavals themselves. Tunisia, Morocco and Algeria have seen liberalising efforts or regime change. It could be argued a new sense of liberalisation and increased freedoms has been epitomised in the successes of these national teams. Certainly in the case of Libya and Tunisia it appears that the political changes have sparked a new found unity, inspiration and rallying call, factors that have seeped through to the national football sides.

Whilst the link may be casual and the statistics do not delve any deeper than top-line numbers, the North African national football teams seem to be reflecting the mood and progress of Arab Spring and their successes are symbolic of energised nations realising their potential. Only in Egypt has the national side not been a flag bearer for success. Rather than being freed from shackles, a powerful footballing nation appears to be more confused and unstable than it was prior to the revolution. In football as in politics, confusion can breed downfall.