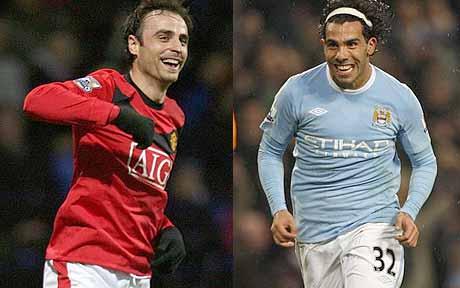 Two Manchester rivals are set to go head to head in the race to become this year’s Premier League Top Scorer. Although Manchester City seem to have fallen just short in the Premier League title race, their star man Carlos Tevez is the favourite to pick up the Golden Boot award at the end of the season ahead of Manchester United’s Dimitar Berbatov.

Their fight has been brewing for a long time now, but with both short of goals of late the chance was there for somebody to come with a late run, however the likes of Darren Bent and Robin Van Persie have surely left their challenge too late.

The problem for Berbatov in the past few weeks has come in the shape of a ‘little pea’. Javier Hernandez, as he is more commonly known has forced his way into the side ahead of the Bulgarian who has started just one of the last seven Premier League games. In that time Berbatov has found the net only once, compared to the four of Hernandez.

Since he scored a vital double in the 3-2 victory at Blackpool, Berbatov started the next two games and failed to find the net. Sir Alex Ferguson it seemed had seen enough and his ruthless streak meant Berbabtov would be on the bench for the next three games. To make matters worse he was given a starting place at Liverpool where they were soundly beaten thanks to a Dirk Kuyt hat-trick. That was the last time Berbatov started a Premier League game.

Carlos Tevez scored at the weekend to close the gap to one on his rival, which was his first goal in four outings, and knowing Carlos Tevez that could open the floodgates for an end of season flourish from the Argentine front man.

Before the mini drought that left Tevez with no goal in four games, he found the net six times in the four games previous, including a hat trick against West Brom. He is very much a confidence player and he is very good at punishing any inferior opposition with his lethal finishing.

Unlike Berbatov, he is a guaranteed starter in the Manchester City team and Mancini builds the team around his talisman. That is shown by the fact he has never started with Tevez on the bench once this season.

Berbatov and Tevez look set to fight to the finish, with the Manchester United man one goal ahead on 20, compared to the 19 times Tevez has found the net this term. Their stats in front of goal for the season as a whole are remarkably similar, Berbatov hitting the target with 62% of his shots, compared to Tevez’s 59% accuracy. Berbatov averages one goal from every four shots he fires at goal, Tevez’s record is slightly inferior, taking just shy of five attempts to score.

The Manchester City man has played 2328 minutes in the Premier League so far, compared to the 2005 minutes of Berbatov, who has only started 21 games this season where as Tevez has lined up from the start on 27 occasions. If this trend continues it is safe to say that Carlos Tevez will be on the pitch a lot longer than his adversary in the final run in, giving him a stronger chance to overhaul the Bulgarian.

At present, Carlos Tevez is favourite to end the season as top scorer at odds of 1.88 (Betfair). Berbatov is available at 2.4 (Betfair). Their nearest challenger is Darren Bent, who is currently on 13 goals, seven off the pace. He can be backed at 55 (Betfair).

Although the Manchester United man is one goal ahead of his City rival, I can understand why Tevez is the favourite given that it seems he will be getting a much greater chance to add to his tally. However, with Wayne Rooney suspended for one Premier League game (two domestic ties in total), Berbatov will get the chance to regain his starting place, so don’t write him off just yet.