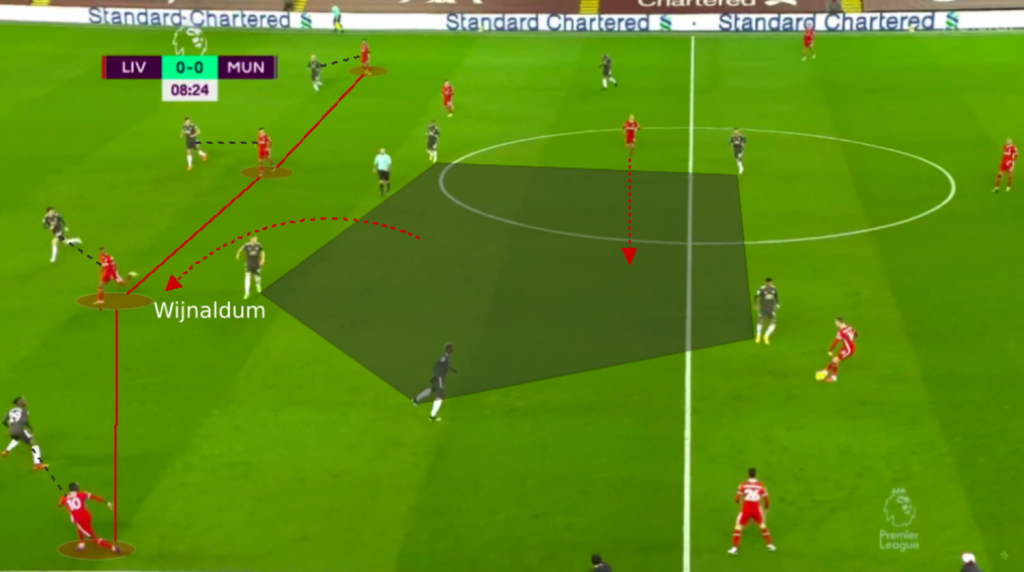 Liverpool and Manchester United collided last night in one of the most important and intriguing Premier League clashes of the season.

Having won just two of their last five games, the defending champions were three points behind their opponents going into this match, while the Red Devils were on an 11-match unbeaten streak in the Premier League, sitting pretty at the top of the table.

An intriguing battle ensued, but neither side found the back of the net. In this tactical analysis, we will take a look at how both sides were set up.

Both managers gave us some surprises when the teams were announced. 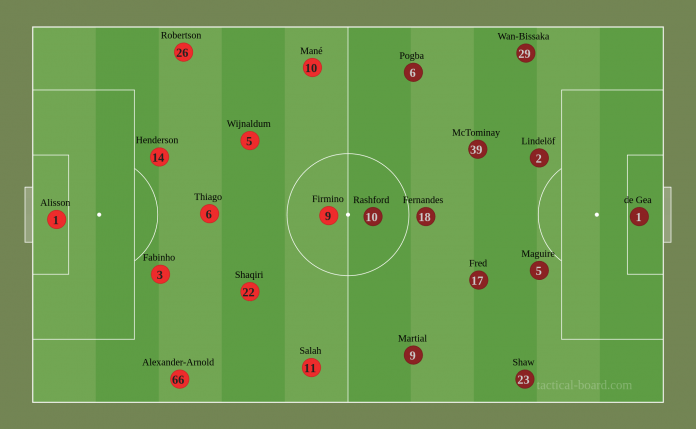 Liverpool went for a 4-3-3 with Alisson in goal again. Unsurprisingly, Trent Alexander-Arnold and Andy Robertson were on either side of the defence, while Jordan Henderson and Fabinho were selected as the two makeshift centre-backs.

Xherdan Shaqiri, Thiago Alcântara and Georginio Wijnaldum made up a slightly unexpected midfield, while the familiar front-three of Mohamed Salah, Roberto Firmino and Sadio Mané started together again.

United fielded a 4-2-3-1 as David de Gea had Aaron Wan-Bissaka, Victor Lindelöf, Harry Maguire and Luke Shaw in front of him. Scott McTominay and Fred were the two holding midfielders, with Bruno Fernandes playing as a number 10.

Paul Pogba and Anthony Martial were fielded on the right and left wing respectively, as Marcus Rashford led the line.

Jürgen Klopp fielded a 4-3-3 on paper but, in practice, it changed into many shapes. 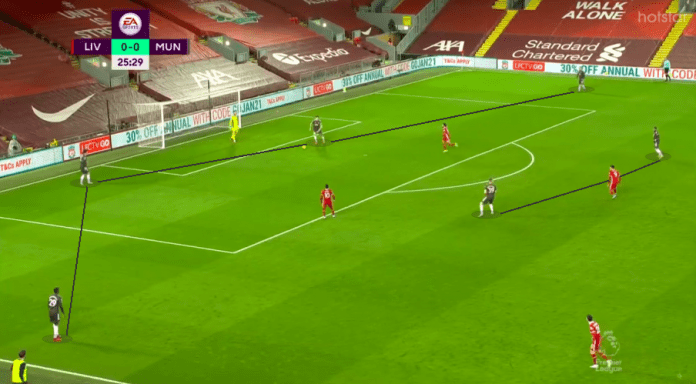 United tried to play out from the back from goal kicks. They did so in a 4-2, using their defence and two holding midfielders.

With that in mind, here is how Liverpool pressed: 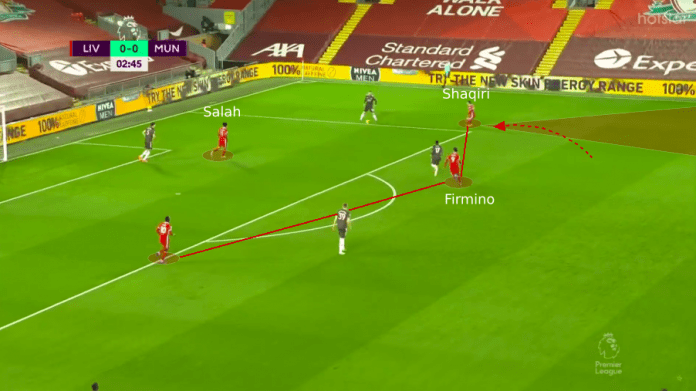 They switched to a 4-2-3-1, with Salah up top, Firmino behind him and Shaqiri on the right. The objective of the press was to force United to play centrally, where the Reds could potentially turn the ball over in a dangerous position. This is why Shaqiri was making an angled run, to block off any passing options on the wing. 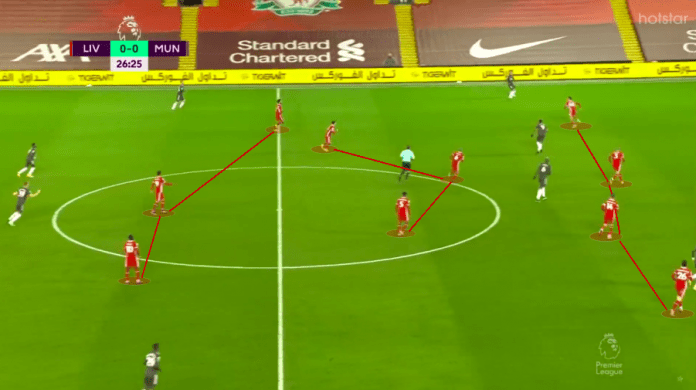 If their press was broken, Liverpool fell into the expected 4-3-3.

In possession, here is how Liverpool worked: 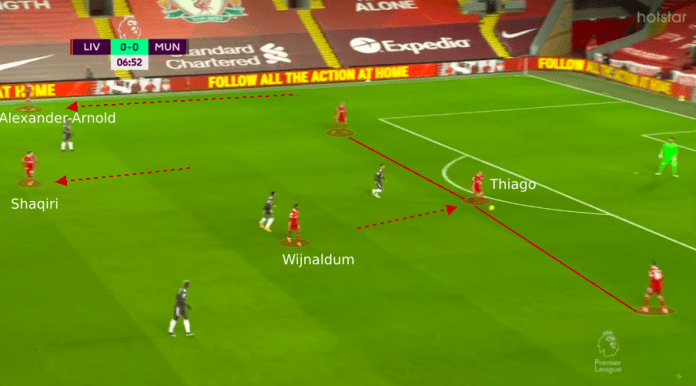 In their own half, the Reds built up with Thiago dropping in between the two centre-backs. The full-backs pushed forward, while Wijnaldum tried to provide a passing option in between Liverpool’s lines as Shaqiri moved forward as well. 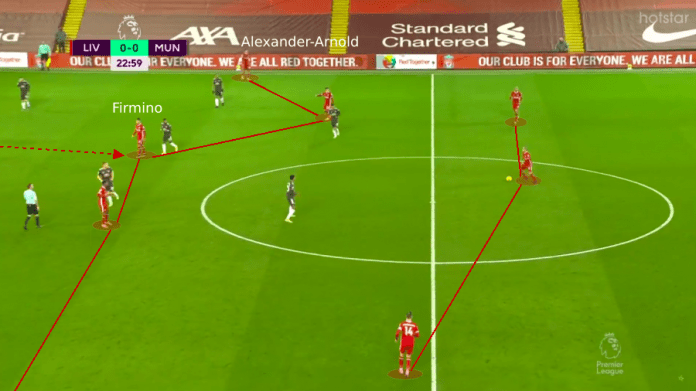 Further up the pitch, Liverpool switched to a 3-4-3 or even a 3-5-2 if Firmino dropped into midfield. 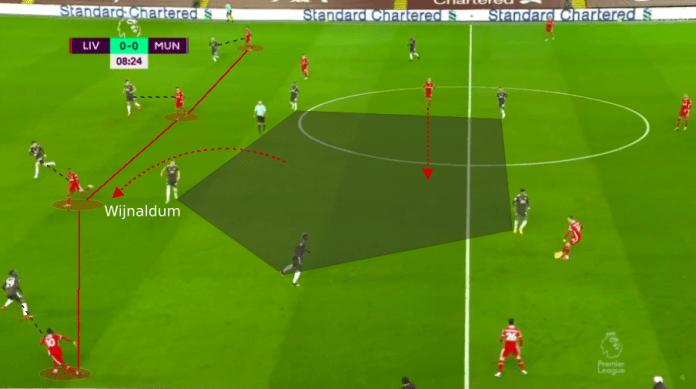 Wijnaldum often pushed up into the frontline, occupying the extra United centre-back. In this way, he would also create a hole in midfield for the likes of Thiago and Shaqiri to exploit.

This was the flexible system that Liverpool employed, but it simply failed to break down a resolute United defence.

With just over one-third of the ball, United found themselves defending quite often. They did that quite well, so here is how: 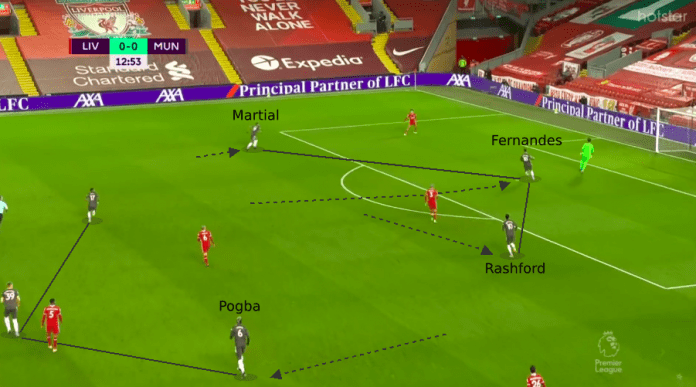 Their first line of defence was the press. The Red Devils didn’t push too high up the pitch often, but when they did, it was in a 4-3-3, as Martial joined the forward line with Fernandes in the middle and Rashford on the right. Pogba dropped into midfield alongside McTominay and Fred. 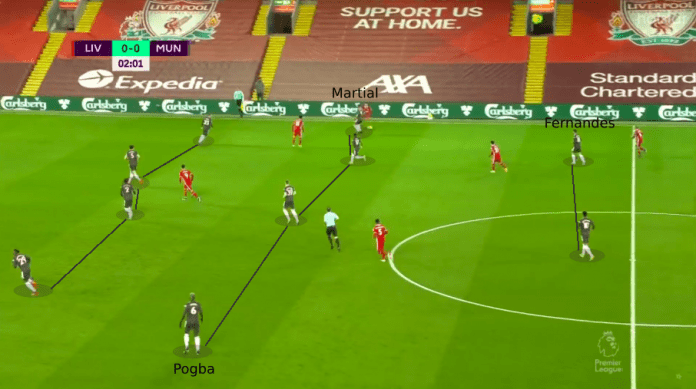 Further back, United switched to a 4-4-2, as Pogba and Martial went on either side of the midfield while Fernandes pushed up alongside Rashford. 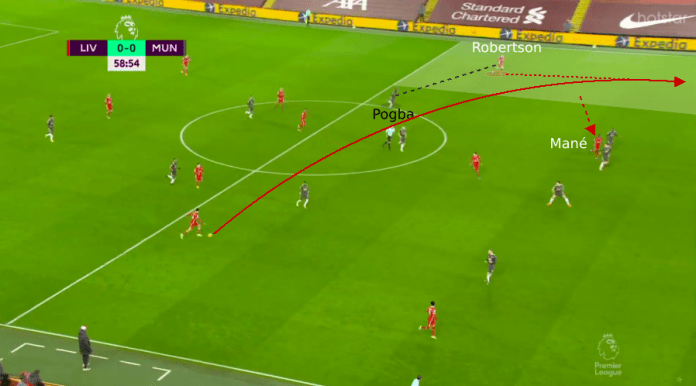 The only weakness in this shape was Pogba on the right, whose lack of defensive capabilities meant that Robertson could find himself in a lot of space on the flank at times for Liverpool. Luckily for United, this never hurt them.

This defensive shape also served to help United transition quickly. Here is how that worked:

Although Liverpool had the lion’s share of possession, United were not out of the game by any stretch of the imagination. Their xG was just 0.33 less than Liverpool’s, and many of their chances came after counterattacks.

One of their focal points in transition was Fernandes. Thiago had a great game for Liverpool as he had a lot of unchallenged possession, but in such defensive scenarios, he wasn’t the best at the job, so United did get into many promising positions. 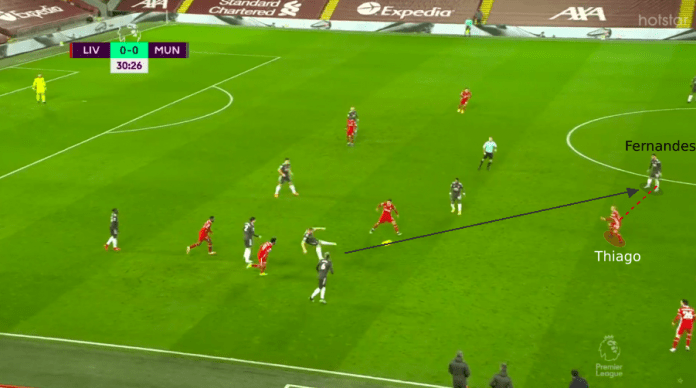 You can see that above – Fernandes is away from Thiago as he prepares to receive a pass following a turnover. 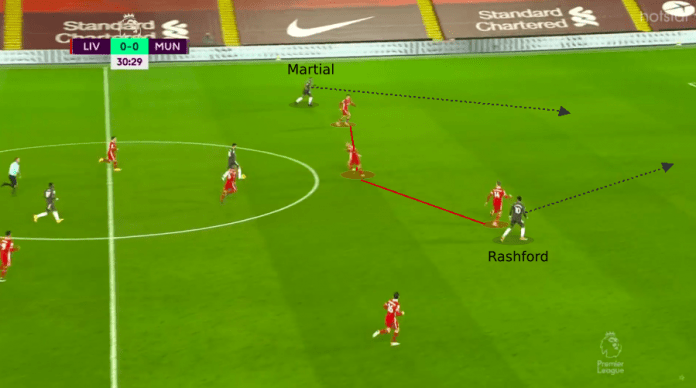 With the Liverpool midfield effectively out of the way, Fernandes can carry the ball forward on the half-turn. Once he does that, he sees two runners – Rashford and Martial ahead of him. The two forwards are on either side of the stretched Liverpool defence.

Of course, Liverpool’s greatest weakness was their high defensive line (as evident above), particularly with their two centre-backs, Fabinho and Henderson not being the quickest in the world (and also not being full-time centre-backs). 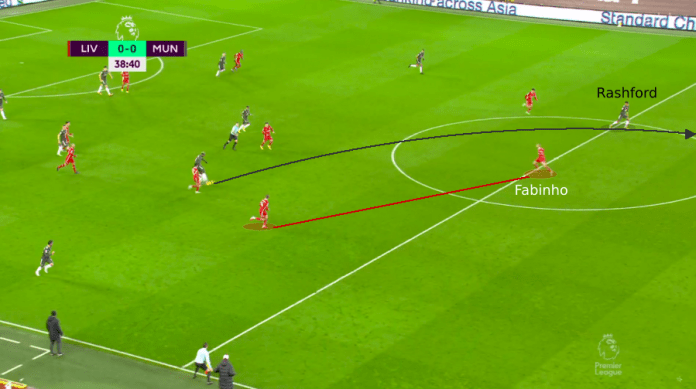 Rashford was the spearhead of the United attack, and whenever they turned the ball over, their first glance was usually to see where he was. The Englishman was asked to go on either side of the Liverpool centre-backs, isolating one of them and taking them on for pace as they chased the ball. In this case, he took on Fabinho, with Henderson was a bit too far forward to be able to influence proceedings. 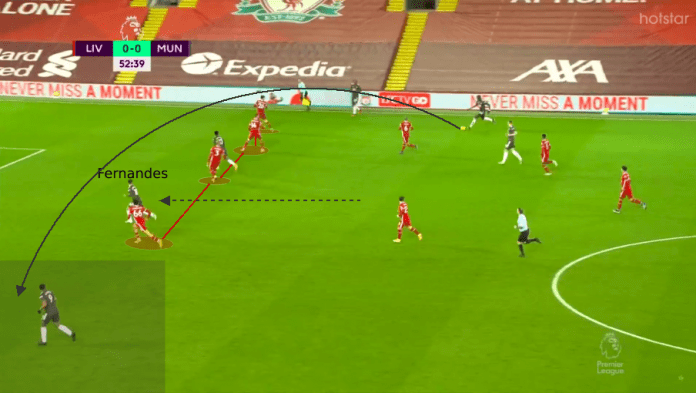 In certain cases, Fernandes did not drop into midfield to receive the ball on the half-turn but instead pushed forward with the rest of the United attackers. This served to stretch the Liverpool defence in terms of width, so one of the wingers would find themselves in a healthy amount of space.

In truth, United could have created a couple of great goalscoring opportunities, but the problem was that Rashford was effectively living offside and Fernandes didn’t bring his A-game to this match.

This was built up to be a big match, but in terms of excitement, it wasn’t quite so huge. Tactically speaking, this was an intriguing battle with certain surprises thrown by both sides, however, neither could claim to be superior in any sense.

Liverpool, as expected, saw much more of the ball, but they rarely broke through United’s defence. The Red Devils, on the other hand, were the side that looked more threatening on the break, particularly late on, but they too lacked incision, so the match ended without goals.

In the end, neither side will be too happy or disappointed with that result or performance. In truth, the happiest team in Manchester and Merseyside after this clash is Manchester City, who, after their thrashing of Crystal Palace, have climbed up to second, and could even leapfrog United with their game in hand.