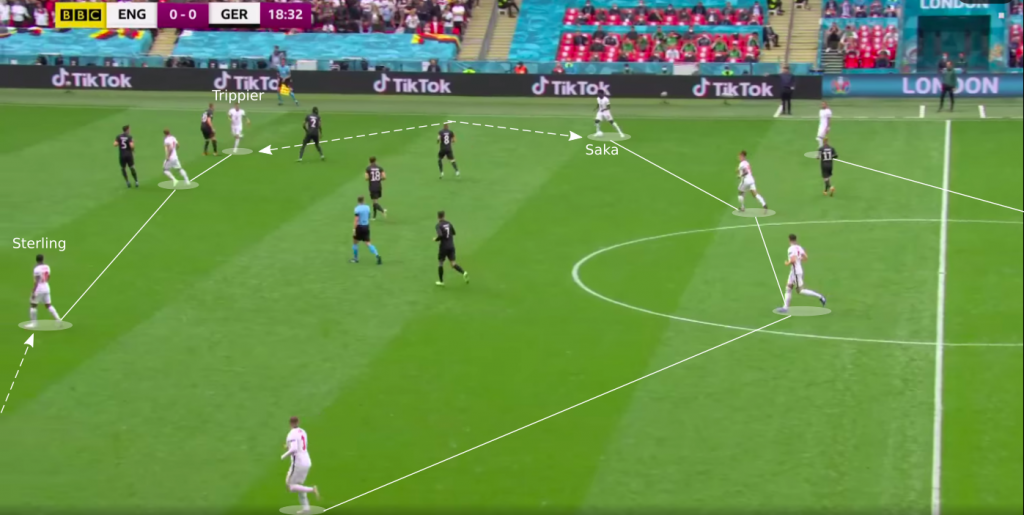 After three days of tournament football at its chaotic and unpredictable best, the UEFA European Championship‘s round of 16 drew to a close.

The last two matches involved Sweden and Ukraine in the late kick-off slot, but the real headline-grabber was played before it, as England faced Germany at Wembley Stadium.

The two sides not only had a rich history against each other on the pitch (where the Germans emerged victorious more often than not), but they were also competing to stay in a knockout bracket which had none of the other ‘big’ nations in the path leading up to the final

Previous results have indeed shown us that nothing can be taken for granted, but the winners here were certainly going to be the favourites to return to Wembley on the 11th of July.

In our preview to the match, we suggested that Gareth Southgate might be tempted to switch to a 3-4-3 to match Germany’s system man-for-man, and that is exactly what he did.

The match wasn’t the most entertaining of knockout matches that we have been treated to in the last few days, but after an intriguing tactical battle, England got the job done with a 2-0 win.

In this analysis, we will take a closer look at how the home side managed to get past their German adversaries, focusing on the tactical aspects of the match.

England out of possession

Defensive solidity has been England’s forte in this edition of Euros, with the Three Lions being the only side to not concede heading into this match.

Although this was the first time England were trying a 3-4-3 in this tournament, they went for a risky man-oriented press using their front-three against the German centre-backs, even if the intensity was not so high. 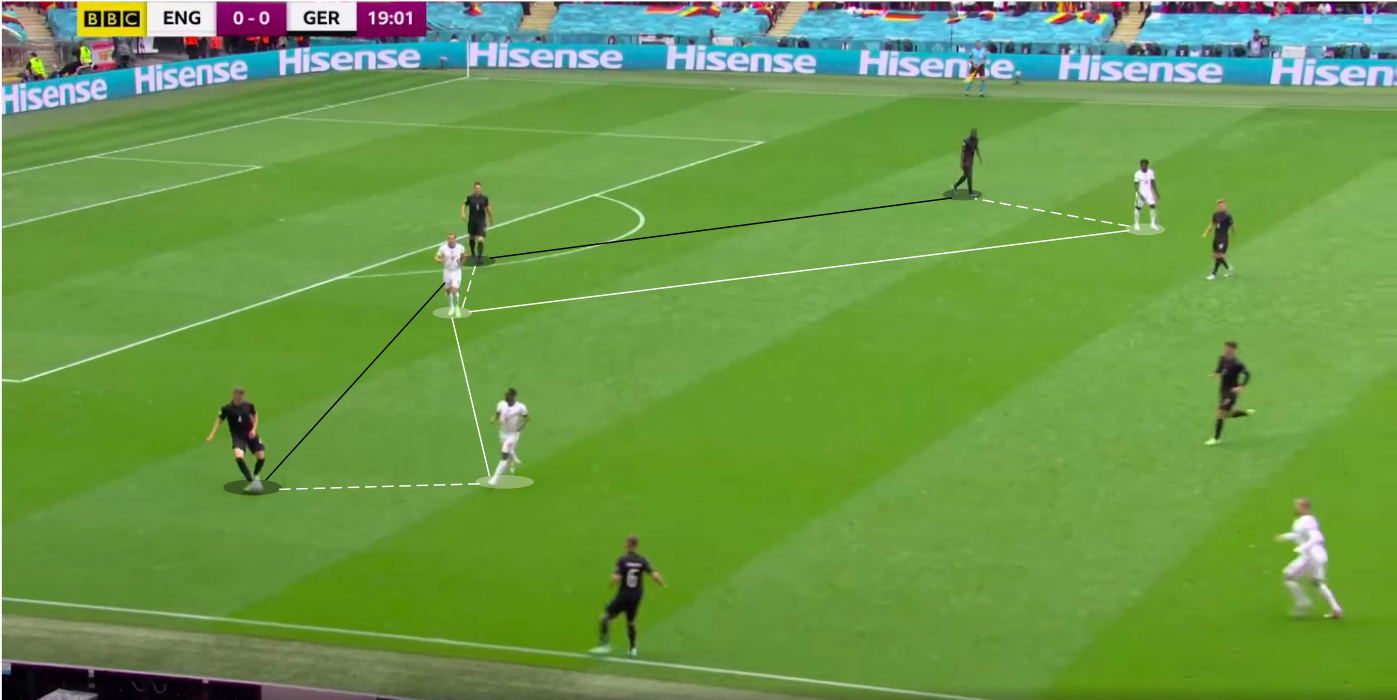 To help his side retain numerical superiority against England’s front-three in the backline, Toni Kroos often dropped deep to create a back-four.

This left Leon Goretzka alone in midfield, so ball progression was a bit of a pain area for Germany in such cases. 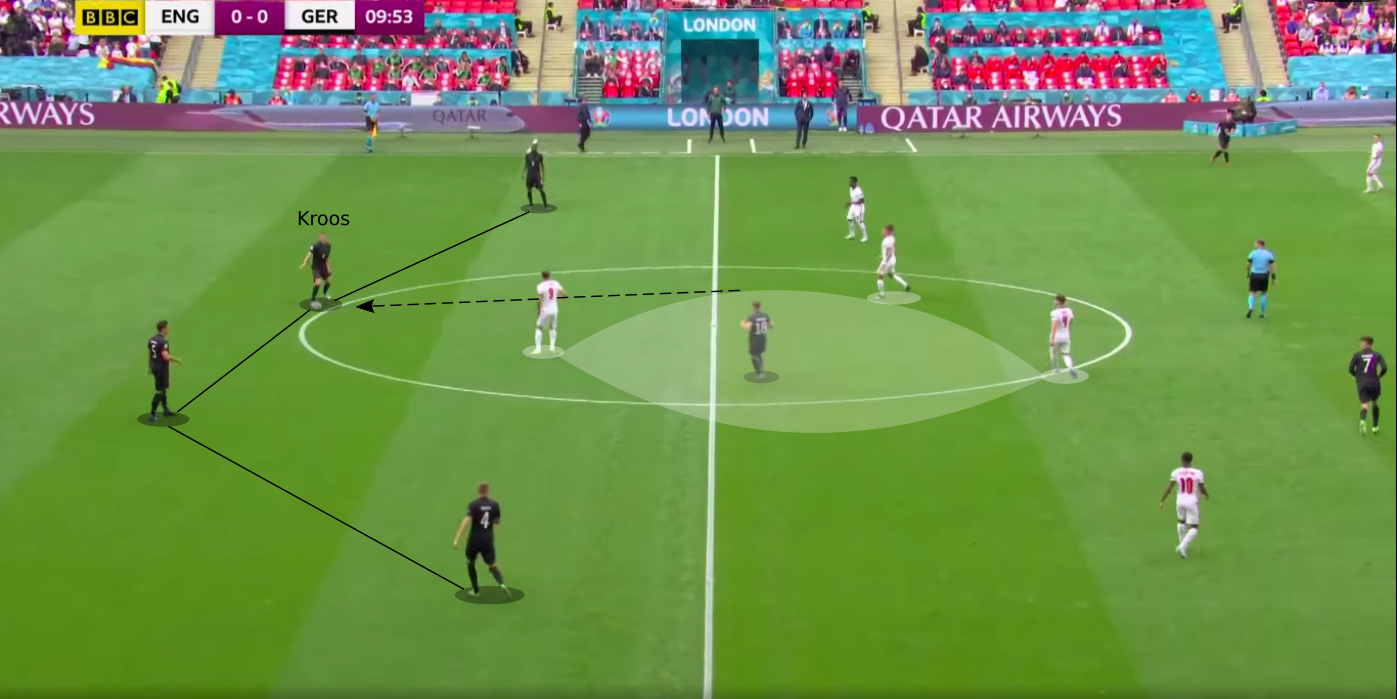 The risk of the press was that it always needed to be coordinated and disciplined because if a German centre-back was afforded time on the ball, he would have a lot of progression options between the lines.

This was magnified with Thomas Müller and Kai Havertz dropping off the front line, as this created a dilemma for the English midfielders with them having to either track their opposite numbers or keep the forwards in check. 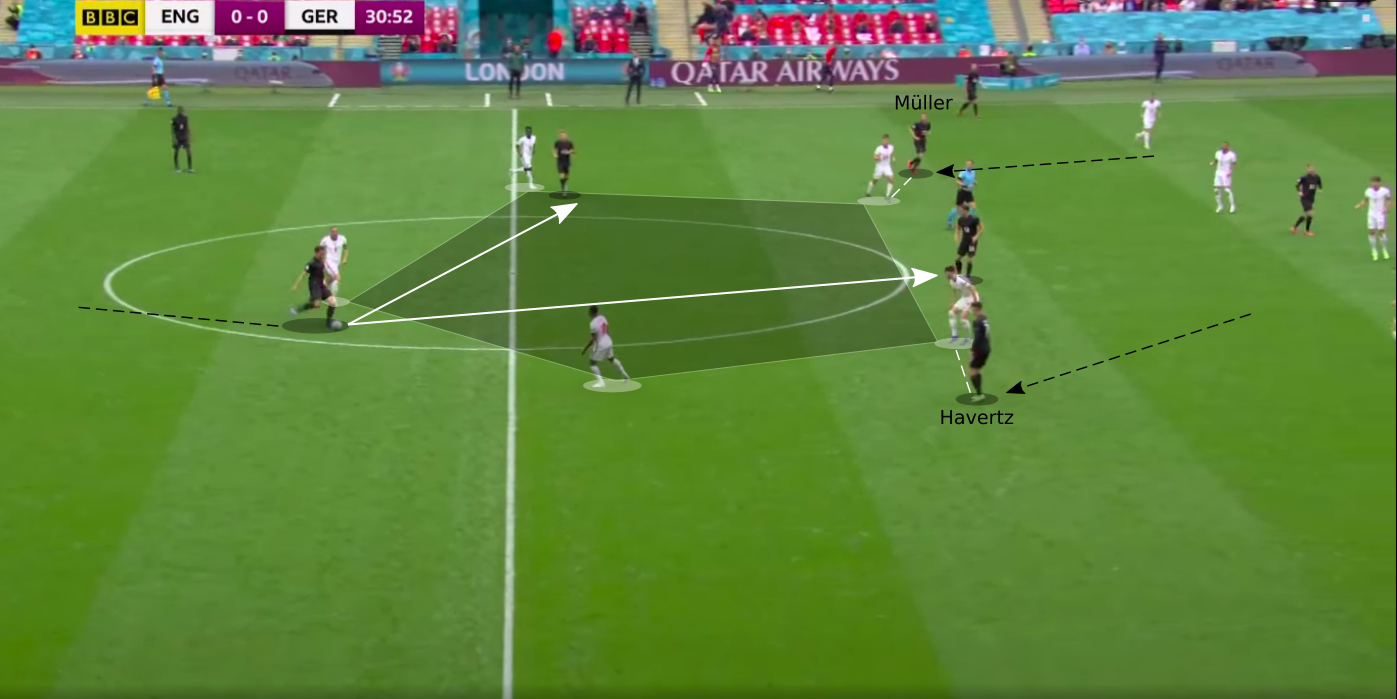 Apart from a couple of lapses early on (which Germany failed to make the most of), Southgate’s men did their jobs very well from a defensive standpoint.

Germany’s main attacking threats throughout the tournament have been the wing-backs, but England contained them using a man-marking system with their own wing-backs, so their goal was never really threatened.

Heading into this match, England had only managed five shots on target, which was the third-worst record in the competition, so something clearly needed to change for them in possession.

Naturally, with the change in formation, England’s shape in the build-up changed to a 3-2 with the three centre-backs and two midfielders involved, as is typical for a 3-4-3.

The more interesting part, though, was that the wing-backs had virtually no involvement in this phase, while the wingers dropped deep to provide ball progression options, with Bukayo Saka wide on the right flank and Raheem Sterling more central on the other side. 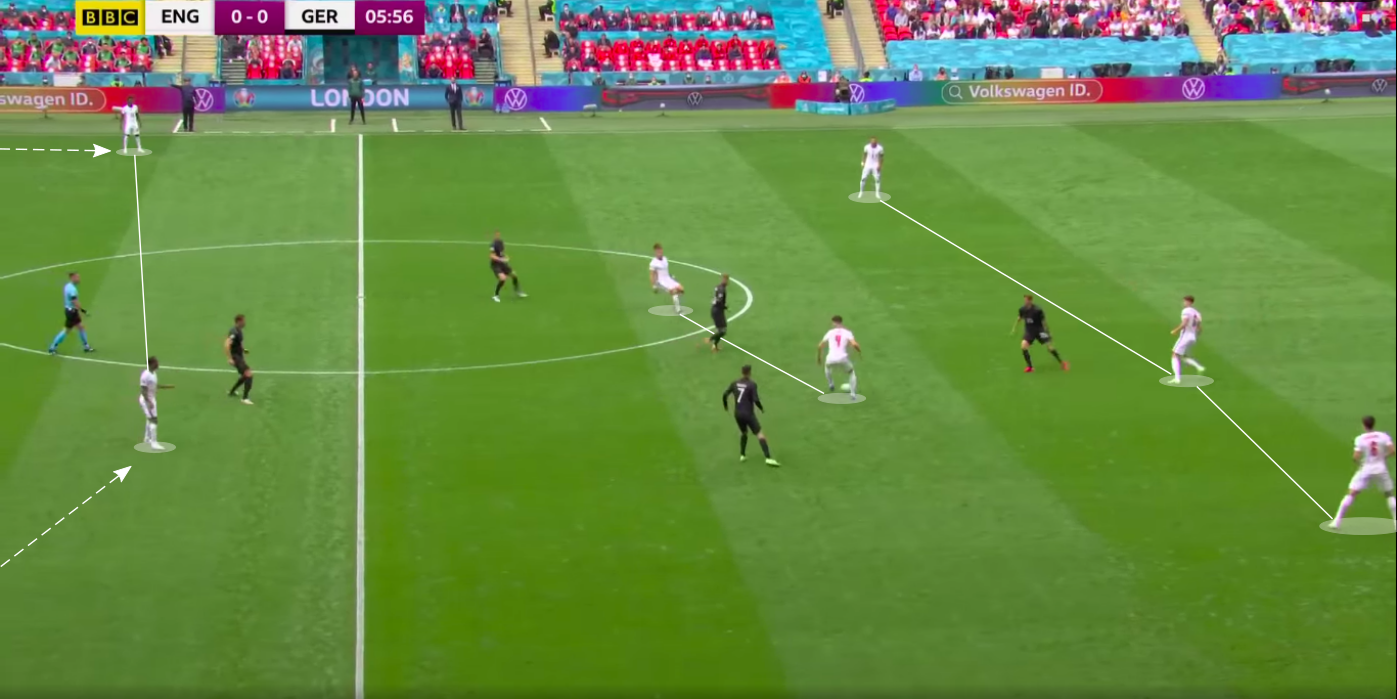 Further forward, these positional rotations remained in practice. On the right, Kieran Trippier effectively operated as a winger almost in line with the striker, while Saka stayed deep to receive and carry the ball forward.

There was a difference on the left, where Luke Shaw held the width and Sterling moved into a central position, but there was no verticality to be seen over here unless Sterling made a run in behind. 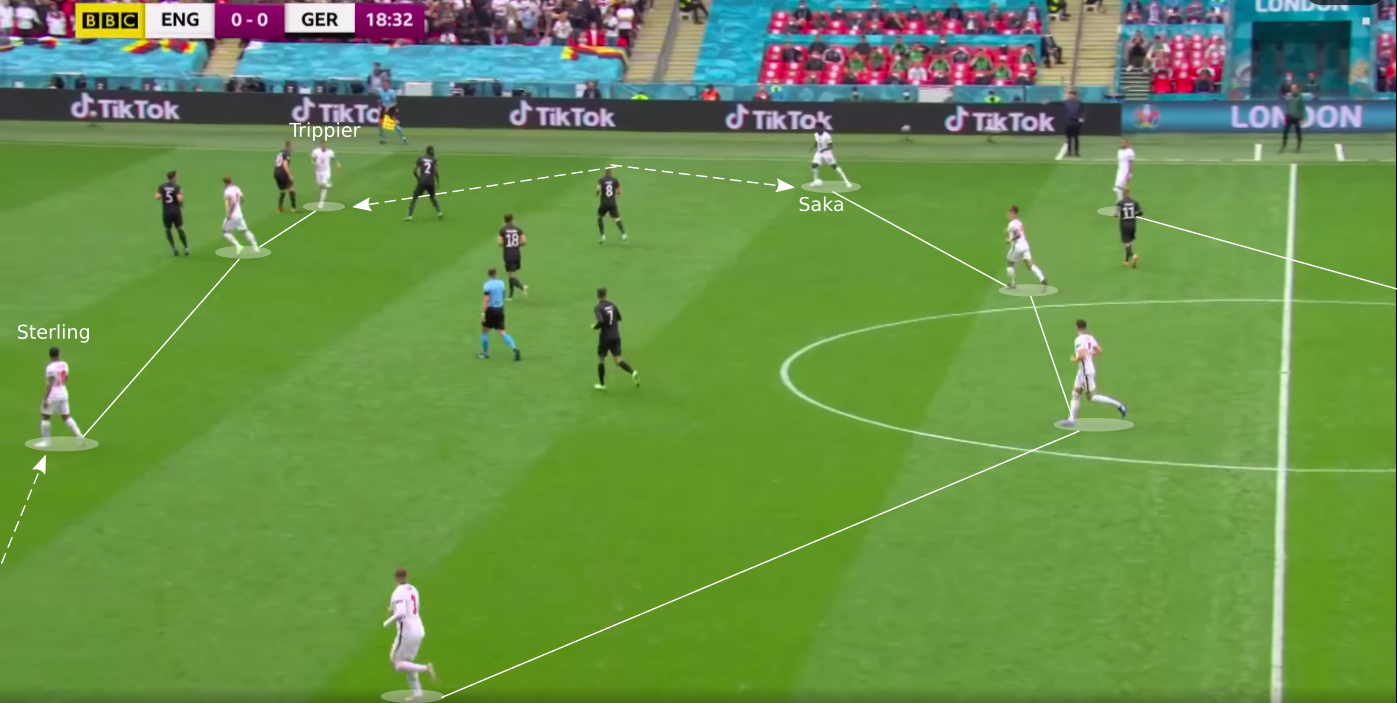 To protect the midfield further and prevent England from creating any overloads in that region using Sterling or Kane, Havertz dropped into the midfield to create a 5-3-2 for Germany in defence.

England’s double pivot in midfield did little in the way of ball progression (they only managed 14 passes to the starting front-three in the full match), while Germany’s midfield not only had a numerical overload, but they also did a good job from a defensive perspective, so the centre-backs primarily had to go out wide to build the attacks.

The success of wing-backs in this tournament has primarily been due to their ability to create numerical overloads out wide against most defensive lines, but when two similar systems collide, they nullify each other.

That was precisely the case with Shaw and Joshua Kimmich, but on the opposite side, Trippier’s forward positioning pinned the oppositions to create a little bit of space behind for Saka.

This is why the Arsenal man had more touches of the ball at half-time than any other attacker, but he alone could not threaten the German goal.

Jack Grealish’s impact off the bench

Despite impressing against the Czech Republic and bagging the assist for the only goal of the match, Jack Grealish was restored to the bench against Germany.

With the scores locked at 0-0 and England looking rather clueless in possession, he was sent on in the 69th minute, and this proved to be a game-changing decision.

The Aston Villa man replaced Saka on paper but did not take up his position, as Sterling moved to the right wing to accommodate the inbound substitute on the left.

As previously discussed, England’s main attacking options were out wide, but the wing-backs were peripheral because they were man-marked out of the game by their counterparts.

Grealish’s introduction changed that, as his gravity was able to pull Kimmich away from Shaw in the build-up to the opener (before which Sterling did some good work coming in from the right). 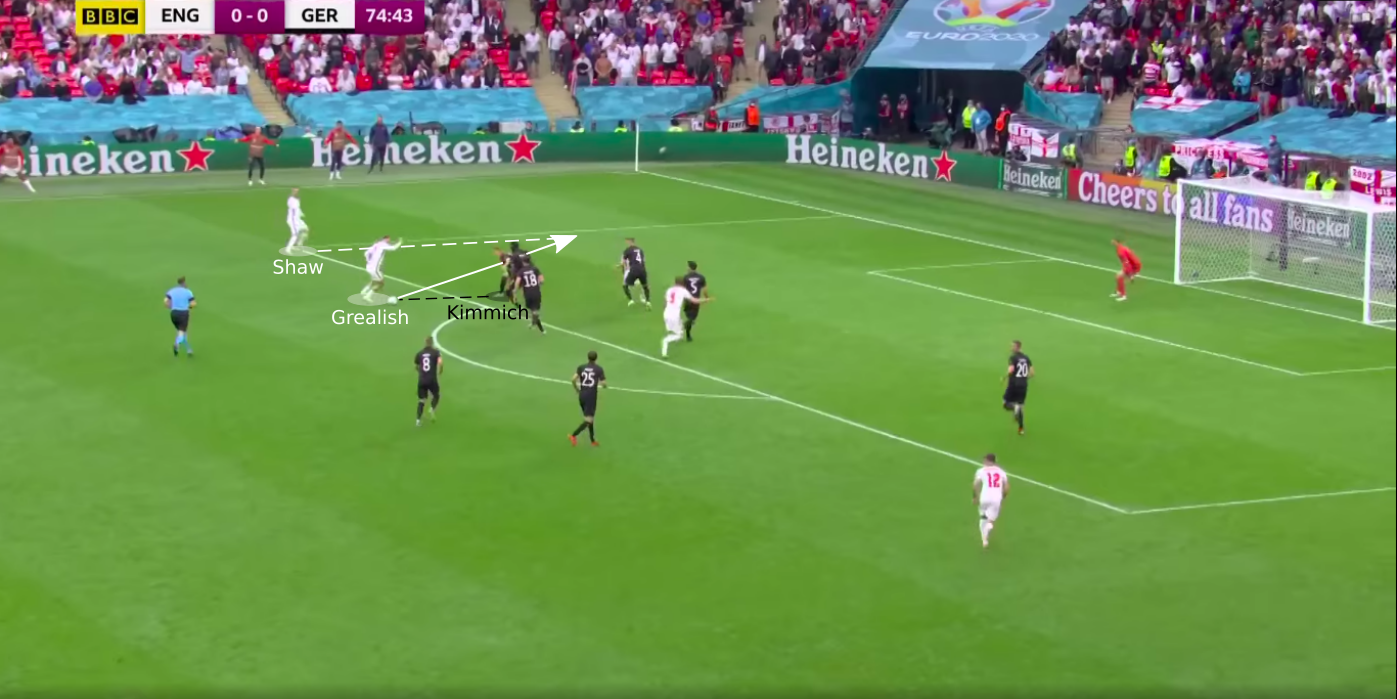 This rare overlapping opportunity was seized upon by Shaw, who delivered a tantalising ball into the box.

Sterling did something on the right that Saka had not done too often- he continued his run after passing the ball from a deeper position, and he was the man who turned the ball in to make it 1-0. 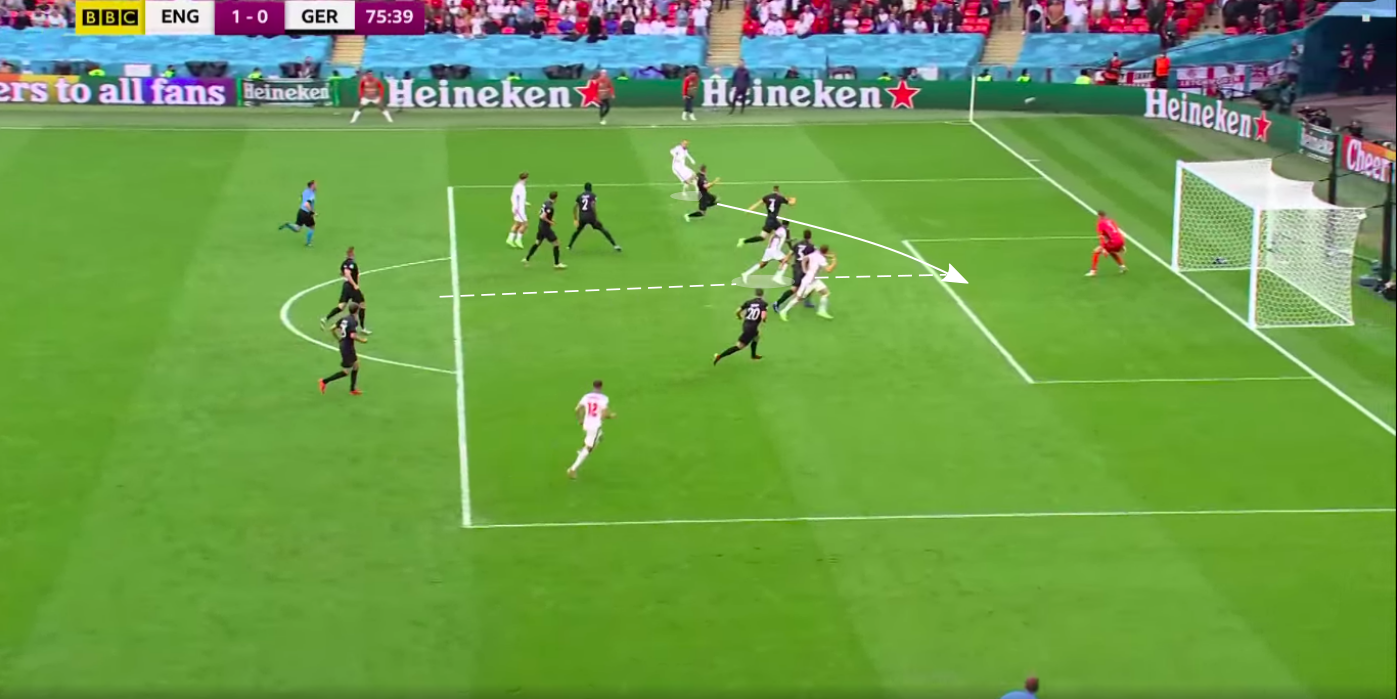 Grealish was also involved in the second goal as he provided the assist for Kane’s low header. However, this originated from a turnover in midfield as opposed to a slick attacking move.

This obviously was a massive victory for England, who – at least on paper – now have a straightforward route to the final, but it should be considered a victory on an individual level for their manager as well.

Many questions were raised about his tactical astuteness and adaptability pre-tournament, but he answered those emphatically by successfully switching to a three centre-back system, maintaining his pragmatic defensive philosophy that got his side through the group stage.

Further, Southgate got his substitutions spot on too, even though it may have seemed a bit silly at first to take England’s main attacking threat off at first.

Grealish played a role in both goals, Sterling (the man who would be the alternative to Saka for being substituted off) scored the first, and Kane netted too.

If there was one manager who did not get things right, it was Joachim Löw. His adamance to stick with the 3-4-3 may have helped Germany thrash Portugal, but it proved to be a hindrance in all the other matches – especially against similar systems employed by Hungary and England.

For Germany, this Euro campaign was a marginal improvement on the 2018 World Cup disaster, but much did not change as they nearly were dumped out of the group stage again and never really looked convincing.

Löw may have delivered great highs for them in the past, but he is leaving them on a low after the last two major competitions, so the DFB’s decision to part ways with him over a year ahead of schedule has certainly proven to be a wise one.

England will now face Ukraine in Rome, with the winner of that match set to meet either the Czech Republic or Denmark in the semi-final.