Liverpool and Swansea City complete round 29 of the 2014-15 Premier League season at the Liberty Stadium on Monday night football.

Brendan Rodgers’ side are unbeaten in their last 12 Premier League games, winning nine. They have picked up more points in 2015 than any other side.

Swansea City’s only home victory since the turn of the year came last time out versus Manchester United back in February. Garry Monk’s side’s results have been inconsistent of late but they remain in the top half.

Kyle Bartley has been a long-term injury at centre-back but Ashley Williams, Federico Fernández and Jordi Amat are all available at centre-back as Garry Monk has all of his regulars available for Monday.

Brad Jones is still out with a thigh injury but Jon Flanagan has returned to first-team training this week. Monday’s game will come too early for the young full-back. Martin Škrtel should be fine despite being forced off early with a head injury last weekend.
Lucas still remains absent but Steven Gerrard is available again. Jordon Ibe is also unavailable on the right wing. 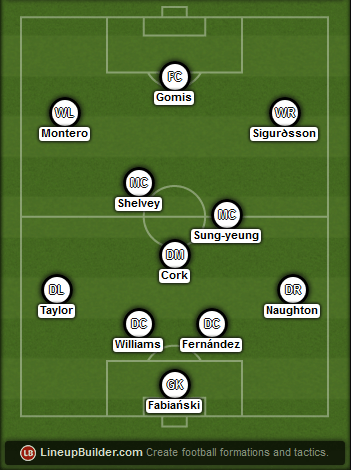 Swansea play in a 4-3-3 formation but have not been too productive of late – scoring more than once in only two of their last 14 Premier League games. After a blistering start to the season, Gylfi Sigurðsson has not assisted a single goal since October. Four of his five goals have come since then though. Bafétimbi Gomis has yet to Wilfried Bony with just two goals in his 24 Premier League games. The Swans have kept two clean sheets in their last 10 league games. 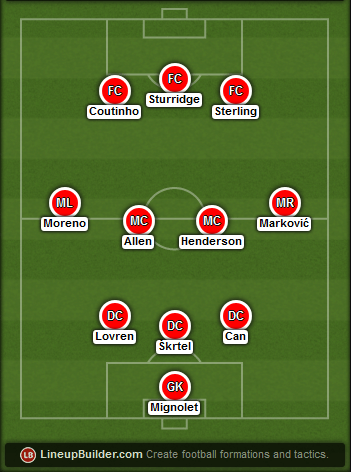 The 3-4-3 formation is working wonders for Brendan Rodgers. Dejan Lovren started last weekend’s FA Cup tie with Blackburn despite Mamadou Sakho returning to fitness – perhaps the Croatian has edged in front now. Lazar Marković is the starter at right wingback in Jordon Ibe’s absence, unless Steven Gerrard returns to the starting lineup and Jordan Henderson moves outside. However, Henderson is in good form in the middle alongside Joe Allen – why break it up? Adam Lallana is the only player who could break up this front three.

Philippe Coutinho vs Kyle Naughton
Philippe Coutinho is in excellent form right now and will be looking to find space against the Swansea midfield to pick the ball up from deep before running at the defence. Kyle Naughton does get beat by wingers and the Brazilian has the skills to do just that. Look out for him to cut inside to get shots away from around the edge of the penalty area. Ashley Williams, solid at throwing himself in front of the ball, plays on the left side of the centre defence so Coutinho should be able to avoid him. He’ll have the likes of Daniel Sturridge and Raheem Sterling to supply also.

Raheem Sterling vs Neil Taylor
On the opposite wing, Raheem Sterling’s pace should be a big threat to Neil Taylor at left-back. The young England international will be looking to cut inside to create goalscoring chances for himself and/or his teammates. Beating Taylor would allow Sterling to draw Ashley Williams out of position which could free up Daniel Sturridge in the centre.

Jefferson Montero vs Lazar Marković
Swansea have a pacey threat of their own by way of Jefferson Montero. The Ecuadorian forward is enjoyable to watching, taking on players and creating opportunities. He has four assists to his name in 10 Premier League starts and 12 substitute appearances. Montero is yet to score though. Lazar Marković is quick himself but playing wingback he’ll be quite attacking which should leave space for Swansea to attack down the left. Emre Can gets beat too so Swansea have a good chance to create chances down this side.

7 – Brendan Rodgers is unbeaten in this fixture (W4, D3). The current Liverpool boss even beat the Reds when he was in charge of Swansea back in 2012.

10 – Gylfi Sigurðsson has gone 10 Premier League games without an assist after starting the season with eight assists in his first 13 games.

23 – Liverpool have picked up more points than any other Premier League side in 2015.