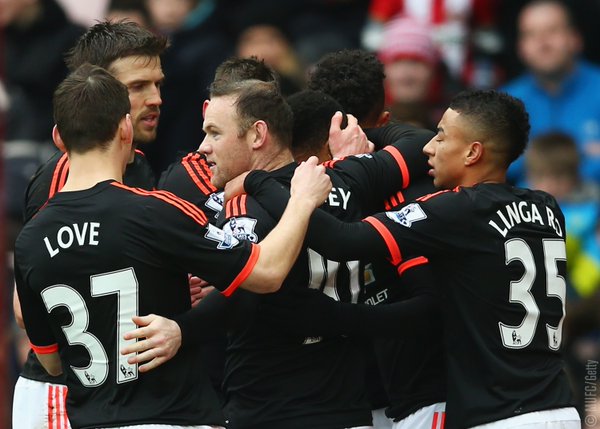 Manchester United’s title aspiration has suffered a huge blow after the Red Devils lost 2-1 to Sunderland at the Stadium of Lights.

Sunderland opened the scoring through a free kick from Wahbi Khazri, although poor defending from Manchester United is to blame for the goal.

Anthony Martial equalized for Manchester United just before half-time, after Mata’s effort was parried away by Mannone from close range. The 20-year-old showed great composure for that goal.

Manchester United fans and journalists were quick to react on the lovely goal by the Frenchman.

Not many players capable of that quality of finish from Anthony Martial. Has a consistently cool head in danger areas. #SAFC #MUFC — Duncan Castles (@DuncanCastles) February 13, 2016

That finish from Martial was stunning. Yes lad! @AnthonyMartial

In the second half, Sunderland’s N’Doye got himself into a good position, one-on-one with David de Gea, but the Spaniard produced a good save to deny an easy goal.

De Gea must have saved Manchester United about 35 points in the last season and a half. They’d be in the Championship if not for him!

Where would Louis van Gaal be without David de Gea? (The goalkeeper the Dutchman wanted to replace in his first transfer window.) #MUFC — Duncan Castles (@DuncanCastles) February 13, 2016

In the 82nd min, Lamine Kone gave home side the lead with a powerful header.

Manchester United fans weren’t happy with the final result. These are the type of games they are expected to win easily, if they are serious about finishing in top four, let alone winning the title.

This season has been a never-ending cycle of false dawns and I’m pretty sick of them now. — The Peoples Person (@PeoplesPerson_) February 13, 2016

More awful piece set-piece defending from Van Gaal’s Manchester United. This time the culprit is his captain and main centre back. #MUFC

Love the people saying the squad isn’t good enough to win title, as if decisions haven’t been taken to spend £250m and this is all unlucky. — Miguel Delaney (@MiguelDelaney) February 13, 2016

This season from #mufc has been the definition of one step forwards two steps backwards.