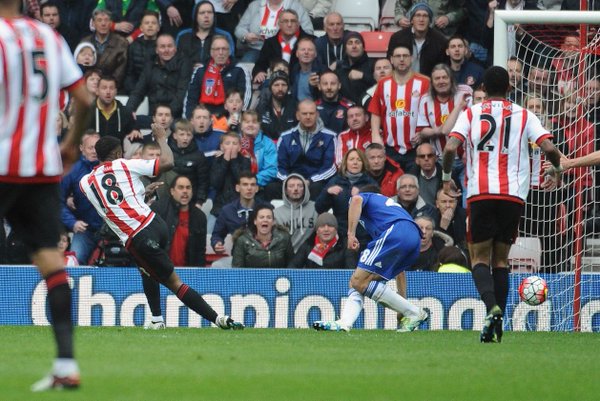 Sunderland twice came from behind to secure a famous 3-2 victory against Chelsea at the Stadium of Light on Saturday afternoon. The victory puts them out of the relegation zone, with Norwich City having lost 1-0 to Manchester United earlier in the day.

Eden Hazard looked lively throughout the opening 45 minutes, with the Belgian heavily involved in almost every Chelsea’s attacking moves.

Diego Costa opened the scoring for the Blues in the 15th minute, with the Spain international finishing superbly from a tight angle after Hazard and Cahill were involved in the build-up.

Costa has now 32 league goals for Chelsea since joining the club. He has been involved in 14 goals in his last 14 Premier League games for Chelsea (nine goals, five assists).

Sunderland kept going and created a good chance through Yedlin, whose header was brilliantly saved by Courtois. The home side kept on applying pressure and eventually got the goal they wanted. Cahill could only head the ball as far as Whabi Khazri who sent a first-time volley past Courtois into the top corner.

What a goal from Whabi Khazri! ? pic.twitter.com/U2wYExvyRh

However, Chelsea regained the lead at the break through Nemanja Matic; the Serbian latched on to an Azpilicueta header and swiftly rolled past Mannone.

Matic has been recently linked with a move away from Stamford Bridge this summer. And his decision to not celebrate after scoring the goal, further adds fuel to the fire.

Might just be his last goal with speculation of being sold, no celebration pic.twitter.com/W4l5iv7LHT

No celebration for the goal from Matic. Think that might confirm what a lot of people have thought for a long while.

Seems Matic’s off in the summer. Complete lack of celebration does make for something, yeah? Or am I over thinking it? #CFC

Diego Costa celebrates in the only way he knows how.. by choking Matic. #CFC pic.twitter.com/5uk7Fo1yrz

Sunderland equalised again through former Liverpool striker Fabio Borini. The Italian loves scoring against Chelsea, having scored in three of his four Premier League appearances against the Blues for Sunderland.

The Black Cats turned the game on its head within a space of few minutes, with Jermain Defoe putting them ahead, after Mikel’s touch deflected into his path. The Englishman has scored 15 goals from 35 shots on target in the Premier League this season (stat courtesy: Squawaka).

There was still a late drama to be unfold. John Terry, the Chelsea skipper, picked up the second yellow right at the end, which means he won’t play in Chelsea’s last home game.

JT off at Sunderland – no Stamford Bridge farewell! #CFC

Check out some of the reactions from the fans and journalists on twitter:

Correction: 2nd yellow for John Terry means 2-match ban, as he’s already had red this season. His season, possibly Chelsea career, is over.

How is Chelsea so bad this season, it’s unbelievable.