Sunderland 1-4 Arsenal: 3 Things We Learned About The Gunners 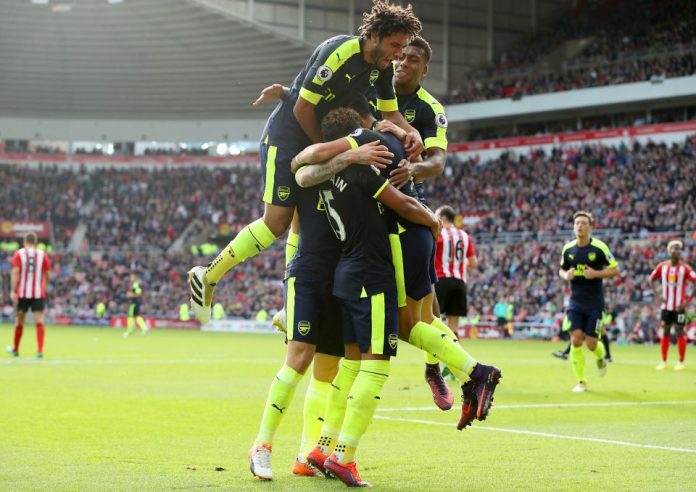 Arsenal secured a 4-1 away win over Sunderland last Saturday in the early kick off. The game started and ended comfortably for Arsenal. But they gifted Sunderland a goal midway through the second half which made it 1-1. They needed two goals from Olivier Giroud in a matter of minutes to guarantee the victory.

This is what we learned from Arsenal’s performance:

Alexis Sánchez has been inspirational for Arsenal this season and at the Stadium of Light, that was no different.

His work rate, trickery, and speed has given a new dimension to Arsenal’s attack and the Sunderland defenders were simply unable to cope.

Sánchez scored two brilliantly taken goals against Sunderland. The first, a bullet header into the top corner from inside the box.

The second, he controlled the ball 6 yards out, turned past Papy Djilobodji as if he was not there, and neatly flicked the ball over the onrushing goalkeeper with the outside of his right boot into the goal.

He has now scored 6 league goals in 10 matches. Only Diego Costa and Sergio Aguero have scored more in the league this season.

Despite some reservations at the start of the season, Sánchez is the real deal upfront.

2. Giroud is the perfect super-sub

Olivier Giroud’s impact off the bench cannot be understated. Sunderland had just equalised and their confidence was soaring.

But Giroud’s introduction changed that within a matter of minutes.

Between the 70 and 77th minute, Arsenal scored three goals, two of which came from Giroud. The first, an expertly taken shot from inside the penalty area after a great pick out from Kieran Gibbs, and the second was a fantastic header from a Mesut Ozil corner.

By the time Sánchez added a forth, the game was already finished.

Giroud showed that he can be both an excellent super sub and plan B for Arsenal. He is still a quality striker and has key strengths to his game that no other attacker in Arsenal’s squad possesses.

3. Complacency may haunt Arsenal this season

At 1-0, Arsenal were cruising, and Sunderland did not look capable of scoring at all. They were dominating the game and should have scored two or three more goals.

While it remained 1-0, anything was possible and a mistake from Shkodran Mustafi led to a Sunderland penalty. Jermaine Defoe duly scored the spot kick.

Fortunately for Arsenal, they were able to win 4-1 in the end. However, against better sides, such complacency could come back to haunt them. Tottenham and Man Utd — Arsenal’s next two opponents in the Premier League — will not be so forgiving if Arsenal gift them a goal like they did against Sunderland.

So if Arsenal want to have any chance of becoming Premier League champions, they need to be more ruthless in front of goal when ahead and dominating the game. Staying focused for the full 90 minutes wouldn’t hurt, either.