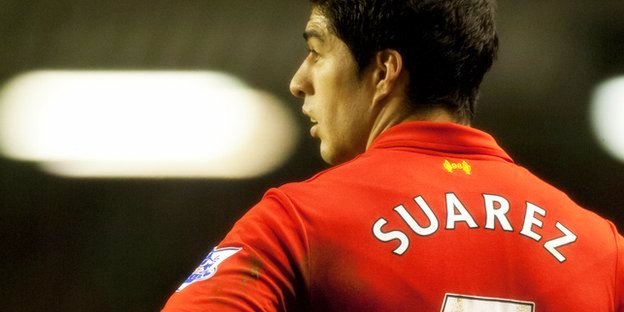 Liverpool striker Luis Suarez says he is extremely happy and comfortable at Liverpool and focuses on taking his team high up the table instead of personal glory.

The Uruguay international has had a mixed season at Liverpool. While he has been the top performer and scorer for the club with 25 goals already in all competitions, 18 of which has come in the Premier League, the club has failed to mount a serious challenge for a top four spot yet again.

Recently, Suarez has been linked with a move to Bayern Munich and the player admitted himself that he would consider any potential offers.

However, Suarez has reiterated his stance and asserted his commitment to the club. He was quoted in the Guardian:

“I always say the same thing, every kid or young player growing up dreams of playing here at Liverpool and today, here, I am highly privileged doing just that.

“I enjoy every minute to the maximum because it’s a great opportunity that my life has presented me and for which I am very pleased.

Earlier, Liverpool manager Brendan Rodgers has tipped Suarez to win the Player of the Year award and the former Swansea boss is convinced that his talisman striker will remain at the club next season, irrespective of league position.

Liverpool are currently sitting eighth in the table, ten points off the fourth place with 11 games remaining and Suarez is looking to help his team to get closer to the Champions League spots.

Further, the former Ajax star insists that he is relishing his new role of playing deeper behind the striker.

Liverpool have signed striker Daniel Sturridge from Chelsea in the January transfer window for £12 million, as a result of which Suarez has been deployed in a deeper position, a move that is benefitting the club of late.