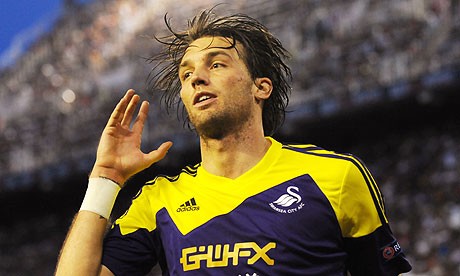 Who would have thought this? Few seasons ago Swansea were languishing in the second division of English Football. And now, they are in Europe and have beaten one of the mighty giants of La Liga, Valencia at the Mestalla.

Take a bow Swansea. This has to be one of the most special moments in the club’s history and clearly shows how far the Wales club has progressed in the last few seasons. It was their first European outing since 1991, and after coming through two qualifying rounds, this must go down as a special victory.

The visitors were not only dominant but the brand of football they played, earned plaudits even from the home supporters. They had 19 shots on target compared to Valencia’s six and had a staggering ball possession of 69%. They entertained with three goals and with a passing success of 93%, one couldn’t help but simply admire their approach.

And a special mention should go out to Michu. The Spaniard hinted of returning back to form against Liverpool in the last match, where he scored in the second half.

He was simply outstanding against the Los Che and arguably was the best performer of the night. Deployed in the hole, behind Bony, he was almost unstoppable. He was on pitch till 77th minute but the damage was already done before.

He bagged a goal for himself, provided assist, had four shots on target and was deeply involved in creativity with 42 total passes at 88% accuracy.

Spanish fans usually are known for their appreciation of the beautiful game. Ronaldinho got standing ovation at the Bernabeu, remember? Yesterday, after De Guzmán swung a wonderful free-kick into the top corner from 35 yards out, the home fans couldn’t help but broke into ovation. Michu got a great reception too from the home fans when he was taken out. A night to remember for the Swans, they deserve it.