Boy, what a game! Really it lived up to the hype. It had everything – drama, goals, controversy, nasty confrontations, wrong decisions from the Ref. Everything. In the end, I think the score-line is a fair reflection of the game and both the managers would take one point apiece with glee. Here are four major talking points of the game: 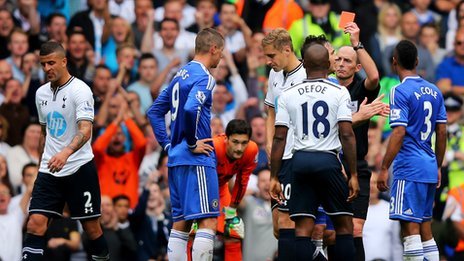 Wrong decision to send Torres off

It was really a wrong decision to send Fernando Torres off. No way can that be a yellow card. He went for a 50/50 challenge with Jan Vertonghen – both raised their arms but the hands didn’t make any contacts with the face. The Spaniard was very unlucky there, as he was already booked.

For that matter, he was lucky in the first place to stay on the pitch. He was fired up for this game but what was he doing there scratching Vertonghen’ face? He got a yellow probably because the ref didn’t spot the whole scenario, but it was a heinous offence and the Spaniard should have got marching orders then and there. He unusually looked terrific today with his touches and movements. At the same time he was petulant too, probably a sign that he is coming back to his old form. Michael Cox notes: “Torres is only petulant when he’s playing well. Often behaved horribly at Liverpool at his peak, without much criticism”

Spurs were terrific in the first half and should have killed the game with the opportunities they created. Villas-Boas said after the match:

“The decisive moment is when Paulinho hit the post in the first half. In the second, we didn’t perform as well as we wanted to”

Likewise, the second half belonged to Chelsea, before Torres was sent off. The momentum was with them after John Terry restored parity, but after going one man down, Chelsea had no other no other options rather than defend deep and see out Spurs’ threat.

The Blues had 11 shots compared to Spurs’ 12, 5 corners to 4 and 96 passes in the attacking third (mind, Spurs enjoyed the lion-share of possession in the last 10-13 mins after Torres got sent off) compared to 134 for the hosts that show how close the competition was.

After an insipid first half performance from the Blues, Mourinho was forced to make a change. Juan Mata was brought in replacing John Obi Mikel and his introduction on the pitch sparked an injection of life in Chelsea’s approach altogether. He bagged an assist and probably has now proven his true worth to his manager.

Can he expect little more trust from you, Jose?

Eriksen was involved in some brilliant attacking movements for Spurs in the first half. But, with only 22 passes (till 70th min) in the match, he went missing at times. Though he was involved in two brilliant openings, but his overall influence in the game was negligible.

And likewise, Jose’ favourite no 10, Oscar didn’t enjoy a great afternoon either. With 22 passes and just one shot on target, it was a pretty ordinary performance from the Brazilian, to say the least.

In the end, both the managers would be happy with the result. Mourinho and Villas-Boas shook hands, shared a little chat and probably would go for a drink too. So, everyone happy it seems. Somewhere in Merseyside, Brendan Rodgers is happy as well.