The weekend’s televised lunchtime kick-off at New Douglas Park between Hamilton and Rangers is set to be an absolute cracker after the 3-3 draw between the two sides in the Scottish Cup last Sunday.

According to BBC Sport, Rangers’ 18-man squad will boast 14 Scottish players, 2 Northern-Irish, an American and 1 Bosnian. During the pre-match conference today, Walter Smith hinted that Kyle Lafferty and Nacho Novo would partner in attack. As for the Accies, they will be without James Wesolowski after picking up a hamstring injury in the defeat to Dundee United. Former Celtic youngster David Van Zanten could make his debut for Hamilton after being a unused substitute in midweek. 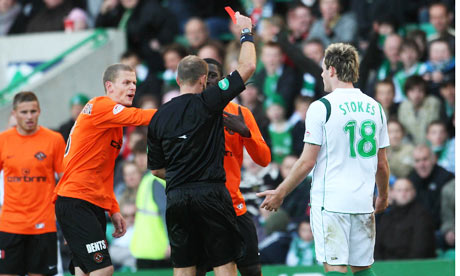 Probably the game of the weekend is at Tannadice where Dundee United host Hibernian. Both sides have been very impressive this season and are currently occupying 4th and 3rd in the SPL respectively. A poor run of results came to an end against Hamilton in midweek for United and interim manager Peter Houston will be without Fransisco Sandaza, Danny Cadamarteri, Lee Wilkie and Scott Robertson. Garry Kenneth, David Robertson and David Goodwillie are all doubts for Saturday’s game.

John Hughes’ Hibs will be without Sol Bamba who is at the African Cup of Nations but Darren McCormack should return following suspension and Graeme Smith should continue in goal.

Ki-Sung Yong wants to be called “Dave” as his nickname

Falkirk, rooted to the bottom of the SPL, will hand SPL debuts to Former Leeds striker Enoch Showunmi, Former Celtic midfielder Colin Healy and Young English winger Jack Compton. Eddie May was delighted to secure the additions to his squad who face a difficult challenge in moving themselves off the bottom position in the SPL. Jackie McNamara will be out of this one at Celtic Park due to a knee injury.

Celtic have a few selection problems this weekend with Landry N’Guemo is at the African Nations Cup and the departures of Gary Caldwell and Barry Robson. New signing Jos Hooiveld is unlikely to feature and McManus is expected to start alongside Loovens for Celtic. Scott McDonald is injured with a hernia so Georgios Samaras and Marco-Antoine Fortune should start in attack for Celtic with South Korean midfielder Ki-Sung-Yong likely to make his debut for Celtic.

At Rugby Park, the tensions between Michael Johnston and Jim Jefferies will have been put aside as Kilmarnock begin a new era under Jimmy Calderwood and Jimmy Nicholl. Calderwood has a couple of concerns, Mark Brown’s loan deal is over so Cameron Bell will be handed a chance as Kilmarnock Goalkeeper for the afternoon. Craig Brown has concerns over Tom Hateley and Sean Hutchinson but both could feature tomorrow.

Andrew Driver is still missing from Laszlo’s side

Hearts and St Mirren battle it out at Tynecastle tomorrow with Csaba Laszlo missing a number of important players. Driver, Thomson, Goncalves and Elliot are all ruled out of tomorrow’s match. St Mirren will be without Stephen McGinn after completing his move to Watford but the Buddies will take confidence from their 1-0 win over Aberdeen on Tuesday.

Finally at McDiarmid Park, Cillian Sheridan could make his debut for St Johnstone after completing his loan-switch from Celtic during the week. For Aberdeen, Lee Miller is still out through suspension and his presence was missed against St Mirren in midweek. Sone Aluko, Zander Diamond and Gary McDonald are out for McGhee’s Dons.