Aberdeen and Celtic played out a thrilling match at Pittodrie which swung the momentum back in the favour of Rangers after what seemed like a glimmer of hope for Celtic after Rangers’ draw at Motherwell last week.

Celtic took an early lead at Pittodrie when Sone Aluko failed to clear and Aiden McGeady setup Robbie Keane, his shot was parried by Jamie Langfield only as far as Diomansy Kamara who slotted home. Aberdeen responded six minutes later when Michael Paton showed some intelligent play to anticipate the loose ball at the edge of the box and he rifled home a stunning left-foot volley into the corner. 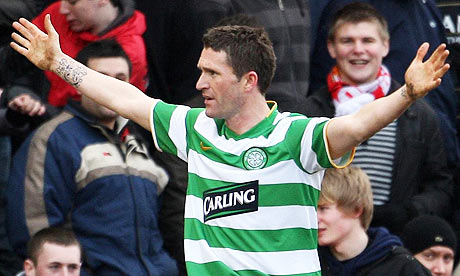 Tony Mowbray’s side went back infront when Robbie Keane supplied a lovely pass across the face of goal for Marc-Antoine Fortune to slot home his 8th league goal of the season. Immediately afterwards, Aberdeen got an equaliser when Jim Paterson steamed down the left-hand side before whipping in a cross that found its way to Darren Mackie at the back post who fired home.

As Aberdeen continued to control large spells of the game, there was a huge decision by Iain Brines which changed the game after Steven MacLean was clearly brought down by Artur Boruc and the ref waved play on. Aberdeen were denied a second penalty when MacLean was then fouled in between O’Dea and Thompson. With these two penalties ignored, will there be the same media frenzy just like Motherwell’s offside goal on Wednesday? I don’t think so. 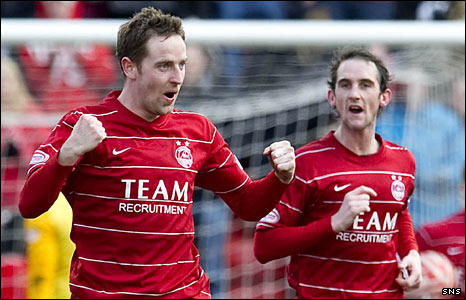 Celtic seemed to wrap up a comfortable three points when Robbie Keane moved off Zander Diamond to header home Celtic’s third goal after 65 minutes. Only seven minutes later, Aiden McGeady fired home from the edge of the box to make it 4-2. However, Aberdeen had other ideas and showed tremendous belief and desire to fight back, but Edson Braafheid will be battered by Tony Mowbray during the week after a moment of absolute madness which saw the Dutch left-back hand ball inside the box. Steven MacLean, the former Rangers striker, stepped-up to stick the ball into the net with Boruc helping him out a little bit. MacLean, who joined from Plymouth in the transfer window, was to be the hero at the end of the match when he turned in a Darren Mackie shot in the final minutes to equalise at 4-4. Celtic’s central defender Darren O’Dea was then sent-off with minutes remaining for a second bookable offence. On the whole, a pulsating 90 minutes and a fantastic football match which shows the Scottish Premier League isn’t actually as bad as people make out. 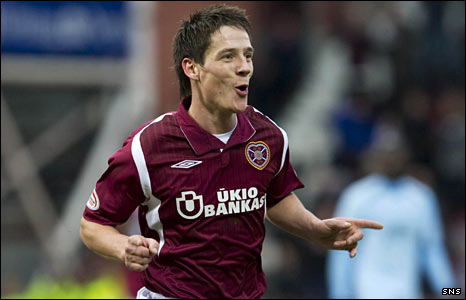 Away from the hot-bed of football at Pittodrie, in the capital, Hearts held on to a 3-2 victory over bottom place Falkirk. The Bairns this week announced the departure of Eddie May and the appointment of Steven Pressley until the end of the season and it was an awful start for the new manager after Hearts took the lead on 5 minutes when Calum Elliot’s delivery caused confusion amongst the Falkirk defence and the ball managed to find its way into the net. The Bairns equalised in the final minutes of the half when Marc Twaddle’s shot from the edge of the box was deflected off Dawid Kucharski and the ball found its way past Marian Kello. The Jambos went back infront through Spanish winger Suso Santana after he reacted first to Robert Olejnik’s mistake to fire the ball into the net from close range. Midfielder Ian Black produced a great strike after 67 minutes to cap off an excellent performance from the former Inverness player and his goal from long-range clipped the underside of the bar and hit the net. Falkirk got a consolation later on thanks to some nice play by Moutinho and Flynn but it wasn’t enough as the Bairns remain rooted to the bottom. 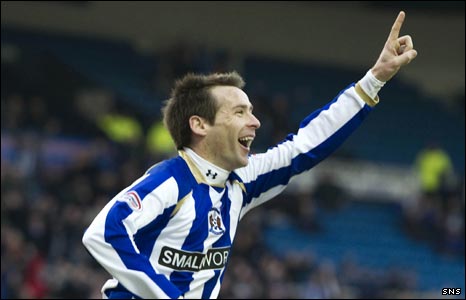 Another five-goal thriller this afternoon, this time at Rugby Park as Kilmarnock saw off St Johnstone. Killie under new manager Jimmy Calderwood have been excellent and now find themselves in 8th after a superb run of results. Peter MacDonald put the Saints infront after 36 minutes who took his second chance to fire home with his left-foot, however, he was injured in the process and had to go off. The Ayrshire men equalised through Chris Maguire towards the end of the half and then found themselves behind not long afterwards when Graham Gartland headed home for the Saints. Experienced left-back Garry Hay scored the equaliser for Kilmarnock after 65 minutes before Mehdi Taouil supplied Kevin Kyle to header home the winner with 13 minutes remaining. 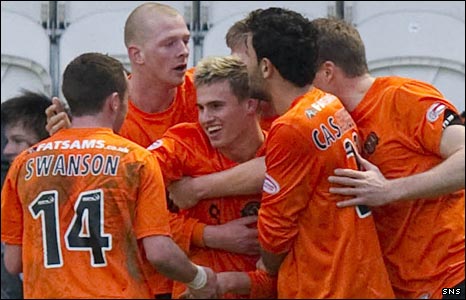 The impressive Goodwillie scored the winner for United

The in-form David Goodwillie scored an injury time winner to sneak Dundee United three points in a 2-1 victory over St Mirren in Paisley. The Buddies took the lead after 66 minutes when Michael Higdon’s looping header from a Steven Robb set-piece found its way past Pernis in the United goal. Peter Houston’s United responded after 82 minutes when Danny Swanson put the Arabs back on level terms. Goodwillie then fired home the volley, four minutes into injury time, to keep United in 4th only a point behind Hibernian.

In the Lanarkshire derby, Motherwell and Hamilton played out a 0-0 draw at New Douglas Park.

Stokes scored at Ibrox earlier in the season

In tomorrow’s crunch game at Ibrox, Rangers host third-place Hibs in the game of the weekend, hopefully. Rangers manager Walter Smith will have a fully-fit squad to choose from for the first time in a while and his side will be fired up for this one after Celtic’s failure to win at Pittodrie. It will also have Hibs fired up aswell as they will want to keep closer to Celtic with two games in hand over the Hoops and only a 5 point gap between the sides.