The gap at the top of the Scottish Premier League has been cut to just 8 points after Celtic’s 2-0 home win against Hearts this evening while Rangers snatched a 1-1 draw in a controversial match at Fir Park. 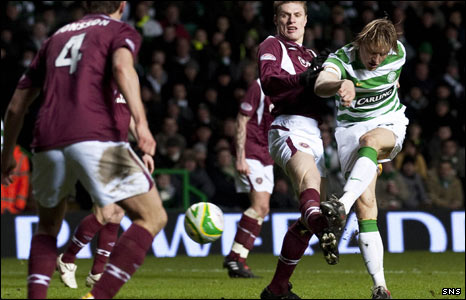 Tony Mowbray’s side look much stronger after the additions of Edson Braafheid, Robbie Keane and Diomansy Kamara in January and the former West Brom manager will be delighted that his new look team is beginning to perform like he wants. The hoops went in at half-time after a boring 0-0 first half at Celtic Park, but the news that Rangers were losing at Fir Park was the boost they needed and they had a 60-second spell which won them the game against Jim Jefferies’ Hearts. Four minutes after half-time, Glenn Loovens popped up with the opening goal after Kamara’s corner was hammered home by the Dutch central defender. Seconds later, Marc-Antoine Fortune kept up his impressive run of form after Aiden McGeady’s rampant play set up Fortune who slid the ball home. Celtic continued to press but struggled to add to their 2-0 advantage. Mowbray’s men now face Aberdeen next week, then Dundee United and Rangers afterwards. 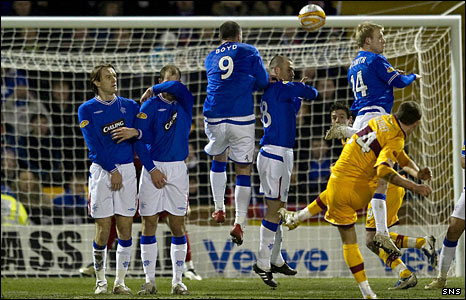 The league leaders Rangers snatched a 1-1 draw at Fir Park on an embarrassing surface that just wasn’t fit for top-flight Scottish Football. Motherwell took the lead after 28 minutes when former Rangers striker Mark Hateley’s son Tom, fired home an absolute cracker of a free-kick which hit the top corner of the net. Rangers were very poor this evening and struggled to get to grips with Motherwell’s pressing and dominance. However, the Gers lifted their performance slightly in the second-half and got the winner with 10 minutes remaining when Sasa Papac’s right-foot cross was finished by Kris Boyd after hesitant defending by Mark Reynolds. Motherwell manager Craig Brown was really disappointed afterwards due to the offside goal that clearly was a goal early in the second-half. As for Rangers in the coming weeks, they are at home to Hibs in a crunch match on Sunday, then have St Johnstone and Celtic to follow. 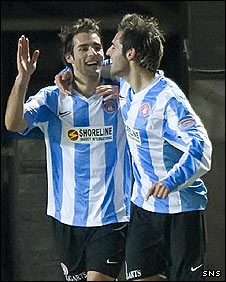 Marco and Flavio Paixao – which one is which?

The surprise result of the evening came at Tannadice where Billy Reid’s Hamilton Accies side defeated Dundee United 2-0. The Paixao twins were the key men this evening with both on the scoresheet in the Accies victory. Hamilton took the lead after 22 minutes when McClenahan’s cross was controlled by Flavio Paixao and blasted home. Marco Paixao got the clinching goal for the Accies in injury time of the first-half when he reacted first to Goalkeeper’s Pernis’ parried save from Marco Paixao’s shot which he slotted home at the second attempt. 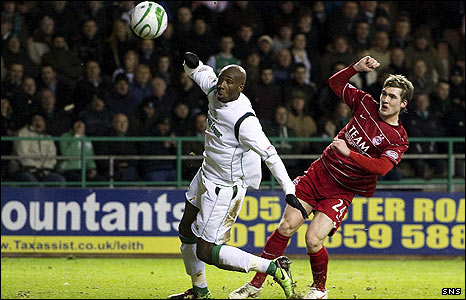 Michael Paton looks on as Aberdeen throw away two-goal lead

The inconsistancy that has been a major problem for Aberdeen this season continued as Mark McGhee’s side threw away a 2 goal lead to draw 2-2 with Hibernian. Michael Paton got the opener for Aberdeen when he finished from close range after a nice assist from McDonald. Just before half-time, Steven MacLean scored his first Aberdeen goal when he diverted a Sone Aluko shot into the net. John Hughes would have had something to say to his players at half-time and it certainly worked as Hibs pulled a goal back through Anthony Stokes as his deflected shot caught out Jamie Langfield. As Hibs pounded the Aberdeen goal, Zander Diamond was penalised for a hand-ball and Benji cooly slotted home the penalty to give Hibs a draw. 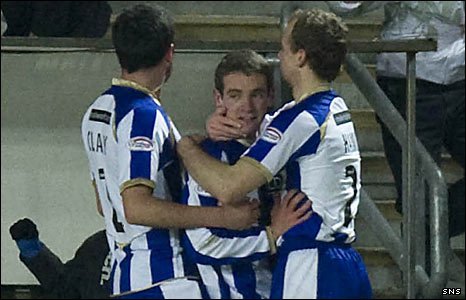 Craig Bryson’s winner for Kilmarnock kept Falkirk rooted to the bottom of the SPL, behind by 3 points after Hamilton’s win at United. Jimmy Calderwood’s Killie side are enjoying their football after some impressive results and sealed the 3 points at the Falkirk Stadium when Chris Maguire set up Craig Bryson who slotted past Robert Olejnik, helpless in the Bairns’ goal. 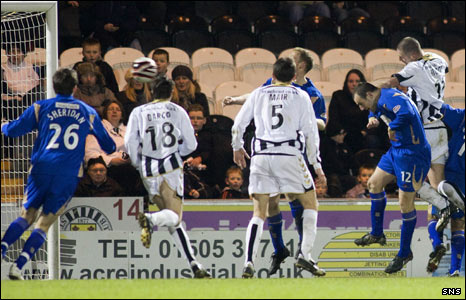 St Mirren happy to leave with point after Higdon’s goal

St Mirren had to dig deep to get a point from this evening’s match at St Mirren Park, mainly thanks to Michael Higdon’s 71st minute equaliser. Earlier in the game, Dave MacKay hammered home the opener after 33 minutes when Peter MacDonald’s effort was cleared only as far as MacKay who fired the ball into the net. Higdon got the equaliser for St Mirren after helping home a free-kick from the left-hand side.