Celtic have cut the gap at the top of the SPL to 7 points after a 4-1 win at McDiarmid Park against St Johnstone on Sunday. 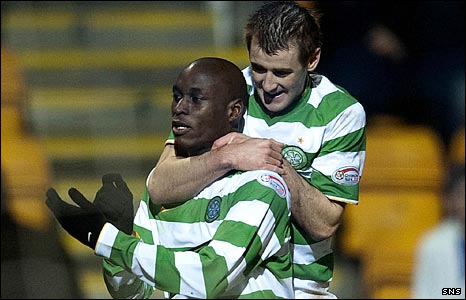 Tony Mowbray’s side had the challenge of coming from a goal behind after Liam Craig slotted home a 12th minute penalty for St Johnstone, then Glenn Loovens was stretchered off with a head injury to add to Mowbray’s injury worries.

Early in the second-half, Graham Gartland was sent off for a last-man challenge on Fortune which swayed the game in Celtic’s favour as they tormented St Johnstone from then on. A splendid performance from Graeme Smith denied Celtic on numerous occasions as Fortune, McGeady and Samaras missed chances enough to win 2 games.

Finally for Celtic, Fortune fired home a superb opener after 67 minutes when he struck from outside the area. Georgios Samaras scored the second for Celtic with a superb volley from a Josh Thompson knock-down. Fortune got his second with a scrappy goal as he managed to put the ball into the net from a tight angle.

The fourth goal came from Paddy McCourt with a superb run from out-wide into the centre before striking the ball into the top corner to give Celtic, what looked like a routine win, but actually, was far from it.

Substitute Andrew Little snatched a 90th minute equaliser for Rangers as they came from behind to draw with Hearts at Ibrox. Both sides had their injury worries, but Rangers in particular, continued to miss as many as 8 key players for the match. The first-half was a pretty scrappy affair as Rangers struggled to string 4 passes together and the closest they came was from a Kirk Broadfoot header that went over the bar.

Hearts went down to 10-men in the second-half when Christian Nade was sent off for kicking the ball away after a previous booking for persistant fouling. Five minutes later, Scott Robinson managed to bundle home the Hearts opener after responding quickest after McGregor parried Lee Wallace’s effort. Rangers still weren’t at the races and Sasa Papac squandered a great chance just before Lee McCulloch’s shot was then parried by Kello to allow Andy Little the chance to stab the ball into the net and to give Rangers a point from this one.

Hibs were the big scorers on Saturday with a 5-1 win over Hamilton at Easter Road. Colin Nish opened the scoring after  16 minutes when Liam Miller’s cross was controlled and finished by Nish to beat Cerny, who was outstanding at Ibrox in midweek.

Anthony Stokes doubled the Hibees’ lead when he shrugged off Alex Neil to fire the ball home for the second goal of the game. Derek Riordan then got Hibs’ 3rd and 4th goals, firstly with a tap-in after Stokes’ shot hit the bar, then with a trademark free-kick from 25 yards. Riordan could have got his hat-trick but missed his chance before Stokes put the rebound in the net for 5-0. Hamilton got a consolation through Marco Paixao but it didn’t really count for much in the end.

Jimmy Calderwood’s return to Pittodrie ended in defeat for Kilmarnock as a goal from Derek Young after 49 minutes seperated the two sides. Calderwood said Darren Mackie was the ‘difference’ between the two sides after praising Mackie’s control and link-up play for Aberdeen, who missed Lee Miller this afternoon.

In Saturday’s early kick-off, Motherwell beat St Mirren 2-0 with goals from Jamie Murphy and John Sutton. On Sunday, Falkirk were thumped 4-1 by Dundee United with Jon Daly scoring a second-half hat-trick. David Goodwillie had already given United the opener before Daly’s hat-trick and Pedro Moutinho scored a consolation in added time.