Falkirk manager Eddie May was delighted after his sides 1-1 draw at Celtic Park. Tony Mowbray’s side huffed and puffed and played some nice football but yet again the finishing of their attackers let them down.

The Celtic fans arrived in anticipation over the debut of highly-rated midfielder Ki-Sung Yong who had a decent game overall in midfield showing some great technique for Celtic – but that will be the last thing on their minds tonight. 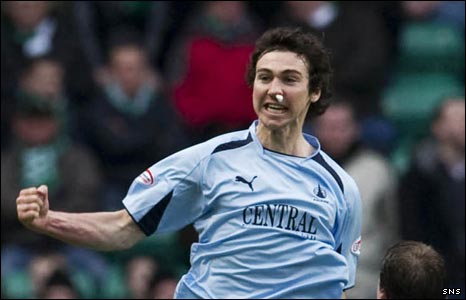 Celtic now lie 9 points behind Rangers in the SPL after the 1-1 draw against Falkirk but they’ll be disappointed as it could have been a game that should have been won. The Hoops started well but surprisingly went 1-0 down to Falkirk when Carl Finnigan fired home a nice finish under the beaten Artur Boruc.

Frustration began to grow at Celtic Park but they got their deserved equaliser five minutes before half-time when Georgios Samaras controlled a Marc Crosas pass to put the ball into the net and give Celtic the boost going into half-time. Falkirk had a couple of decent chances themselves in the second-half but they couldn’t get that crucial touch in the final third to score the winner. 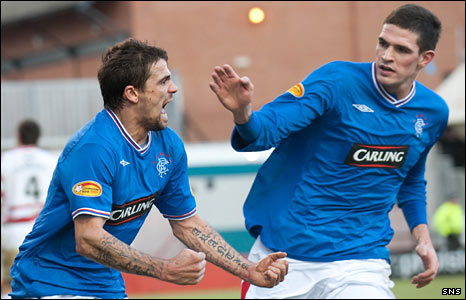 Novo celebrates his winner with Lafferty

Celtic’s big rivals Rangers scraped a victory at New Douglas Park in the televised lunchtime kick-off when Nacho Novo managed to ease the ball into the net from a very tight angle after a superb run from Sasa Papac which set up John Fleck and his shot was parried by Cerny to Novo for the Spaniard to score the goal.

Rangers didn’t play that well today, Hamilton had controlled most of the game with Alex Neil and James McArthur dictating the pace of the game. The change which introduced John Fleck to the Rangers attack seemed the key turning point in the game as the little No.29 showed some real decent touches in his cameo appearance. 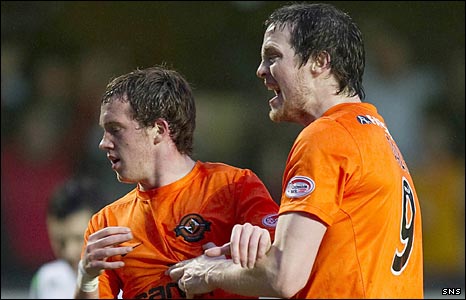 Danny Swanson scored the only goal at Tannadice

Danny Swanson’s 39th minute goal for Dundee United was enough for the Arabs to see off John Hughes’ Hibs at Tannadice with the men from the City of Discovery leap-frogging their Edinburgh counterparts into 3rd position which will be music to the ears of the United fans after a tough few months.

United dominated the match with more than 61% of the possession and a missed penalty by David Goodwillie which was saved by Graeme Smith. Hibs’ promising midfielder David Wotherspoon hit the post and Liam Miller also put a shot wide of the post. 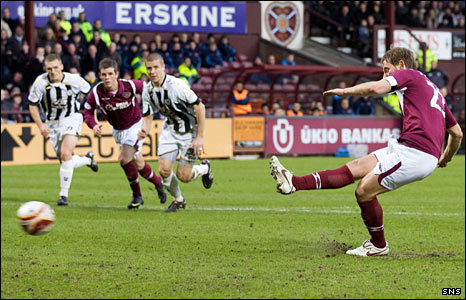 Michael Stewart scored his 6th penalty of the season to sneak Hearts a 1-0 win over St Mirren at Tynecastle. The score-line was typical of the Jambos’ season with no real potency in attack and the main threat coming from the determined Michael Stewart who is on great form for Csaba Laszlo’s side. The win from the Gorgie club move them back into touching distance with Hibs now, who are in 4th after an impressive start but are now only 5 points clear of Hearts.

Jim O’Brien scoring one of two that he scored today

Craig Brown and Archie Knox enjoyed their first win in charge of Motherwell with a 3-0 win at Rugby Park against Kilmarnock in Jimmy Calderwood’s first match. Former Celtic midfielder Jim O’Brien had an excellent game for Motherwell this afternoon showing the potential which saw get his chance at Celtic Park before moving to Motherwell.

The first goal came early in the second-half when O’Brien managed to turn away and slot home a left-footed shot into the corner. O’Brien got his second with another decent goal from close-range before Jutkiewicz got the third goal for Motherwell scoring from inside the box.

St Johnstone’s match at home to Aberdeen was postponed after a pitch inspection this morning.