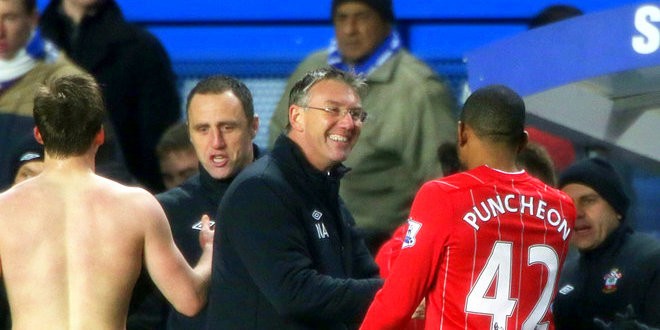 Southampton have parted ways with Nigel Adkins and has appointed Mauricio Pochettino as the new first team manager.

“Pochettino will take charge of training on Saturday ahead of his first game as Southampton First Team Manager on Monday evening (21st December) against Everton in the Barclays Premier League.

“The Club would like to thank Nigel Adkins for his service over the past three seasons, and wish him well for the future.”

This news will come as a shock to most of the Saints fans considering how well the club has performed under Adkins.

Adkins achieved two consecutive promotions with the Saints. Southampton were struggling at the bottom of the League One table when Adkins took over in 2010. But two years into the job, he has seen club regain their Premier League status once again.

It is not just about the promotions that he has achieved with the club; it is the way Adkins has achieved it that stands out. He has done a fantastic job in working with the youngsters at the club and promoting them.

Very few experts expected Southampton to sit in the 15th place in the table in January when the season started. But Southampton have put in some wonderful displays and although results haven’t always gone their way, they have been a breath of fresh air in the league this season.

It is hard to rationalise why Adkins was sacked specially when one considers that Southampton has only lost two of their last 12 games in the Premier League. Even in their last match, Adkins’ men showed tremendous spirit against a strong Chelsea side and staged a wonderful comeback in second half of the match.

“This decision has been made with the long-term ambitions of Southampton Football Club in mind.

“Whilst we acknowledge the contribution Nigel has made during the past two years, for the Club to progress and achieve our long-term targets a change was needed.

“Mauricio is a well-respected coach of substantial quality who has gained a reputation as an astute tactician and excellent man manager.

“I have every confidence that he will inspire our talented squad of players to perform at the highest possible level.

“He also shares my belief that the most successful clubs are built by nurturing young players through a development system that provides a clear path to the First Team, thereby creating a culture that keeps them at the Club for the long term.

“This is an approach he has employed with great success in the past and I look forward to him bringing that experience and expertise to Southampton.”

Mauricio Pochettino is a former Espanyol player and manager. He had three spells at the Spanish club – twice as a player and once as a manager. His managerial skills came into prominence when was appointed as the Espanyol manager in 2008-09 season.

The Spanish side were struggling in La Liga and were placed third from the bottom when Pochettino took over, but by the end of the season, the former Argentina international not only managed to keep them up, but Espanyol finished 10th in the league.

The 40-year-old is thrilled with the opportunity of managing a club like Southampton in the Premier League and expressed his excitement at being part of a new era at the club. Pochettino was quoted in press:

“This is the kind of opportunity that any coach would relish. Southampton is a club with great heritage, and an even more exciting future.

“There is a clear vision to take the club to a new era of sustained success in the Premier League, and beyond, which I’m delighted to be part of.”

It would be interesting to see how much success this “new era” brings at the club, but for the fans Adkins will always be a legend. Pochetinno will have to work hard to meet the standards that were set by his predecessor.