India
Home News southampton in bid for ever banega 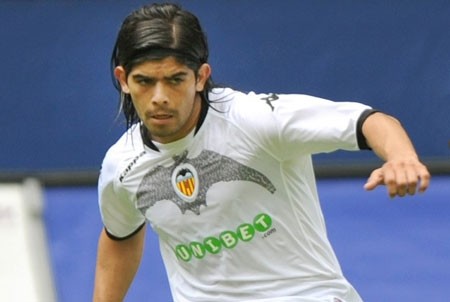 Valencia’s attacking-midfielder is attracting interesting from Premier League side Southampton.

Saints’ manager Mauricio Pochettino is said to have long-admired the Argentine international, and is preparing a bid for the £12M-rated player.

Last season, Banega, 25, made 29 appearances in La Liga, scoring four goals. He was unable to lead the Spanish side to a Champions League place finish and is reportedly seeking a new challenge.

Southampton made a previous bid for the midfielder back in June, but were unsuccessful and the deal failed to materialise. They turned their attentions to former Celtic midfielder Victor Wanyama, and after procuring his signature, are now ready to reignite their interest in Banega.

Their previous bid for the 25-year old was £7M – which was rejected. Pochettino has a wealth of funds to sign his summer targets as the side look to propel themselves higher up the Premier League table next season, so they will make an improved offer in the coming week.

Valencia have been fighting off suitors looking to snatch their top goalscorer Roberto Soldado from their hands, and have initially appeared unwilling to let Banega leave on their watch too.

Ever Banega has been with Valencia since 2008 – signing from Argentinean side Boca Juniors. In which time, he’s gone on to make 163 appearances, scoring 10 goals in total.

Southampton’s owners are setting their sights on a possible Europa League finish, and are signing experienced international players to help achieve their goal. Banega is among one of many names they have on their summer wishlist, but has made no official word of wanting out of Valencia – or of Southampton’s interest.

Miroslav Dukic, manager of the La Liga side, has no plans to sell his midfielder, but admitted he would accept offers for the right price. However, he was keen to add until an offer is made, Banega would remain a Valencia player.