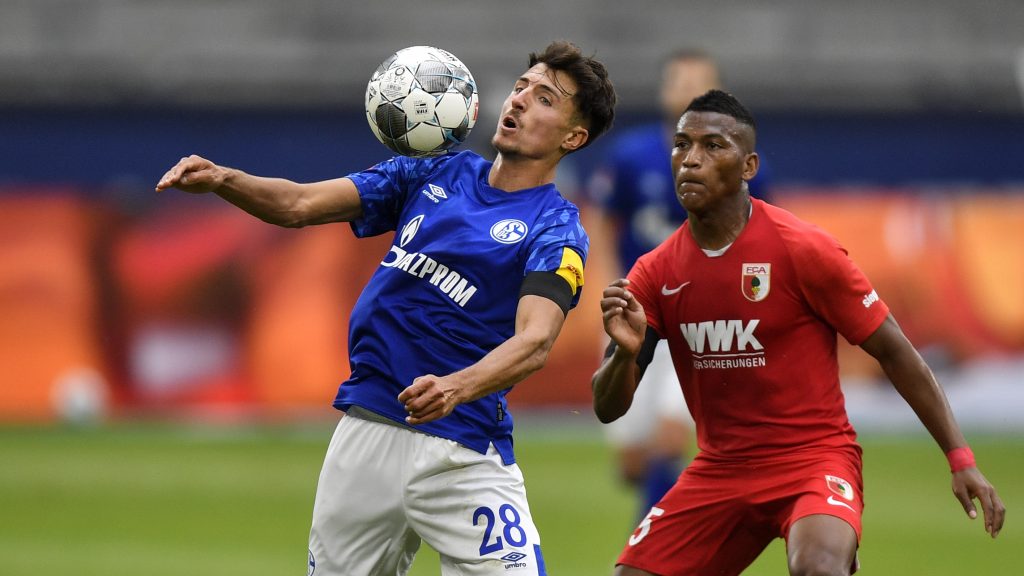 Schalke welcomed Augsburg to the Veltins-Arena in a clash between the two teams with the longest winless streaks in the Bundesliga, knowing that a win would take them back to 6th in the table.

Schalke started well but Rami Khedira won a free kick for Augsburg early on, which Eduard Löwen converted with a thumping strike.

The Royal Blues dominated possession throughout, but failed to create any clear-cut chances in the first half.

The story of the second half was the same. In the 76th minute, a long ball and a mistake from Kenny allowed Sarenren Bazee to score.

Another mistake in the dying stages by Levant Mercan allowed substitute Sergio Córdova to capitalise and score.

In the end, Schalke’s lack of attacking threat and wastefulness cost them the match, as Augsburg were rock-solid and gritty in defence.

Schalke started well, but the goal they conceded was a major blow to them. Augsburg were then able to sit back and try to hit on the counter attacks. McKennie dropped in between the centre-backs, allowing Kenny and Oczipka to push forward. Augsburg were more than happy to sit back, absorb pressure and rely on counter-attacks, as Niederlechner exploited the spaces on the wings left open by the Schalke wing-backs. The second half saw more of the same, but Augsburg were able to capitalise on Schalke’s mistakes. Augsburg were absolutely unbreakable in defence, and Schalke’s lacklustre attacking performance coupled with their defensive mistakes gifted Augsburg the 3 points.

Kenny vs Vargas – It was an even battle between two of the fastest players on the pitch. Kenny was able to keep Vargas’ attacking threat in check, but failed to get forward himself.

Markus Schubert – Arguably could’ve saved the free-kick. Was decent for the rest of the match, and he couldn’t have saved either of the other goals. His distribution could have been better, though. 5.

Jonjoe Kenny – He was decent on the right flank, but he made a costly mistake which led to Augsburg’s second goal. 5.5.

Salif Sané – His distribution was good. Maybe could have done better to prevent the second, but he was great for the rest of the game, as he had the most touches of any Schalke player. But looking at that differently, it shows the lack of attacking threat for Schalke. 7.

Matija Nastasić – He didn’t make too many mistakes, but was absolutely nowhere when the last two goals went in. 5.5.

Bastian Oczipka – Made lots of runs down the left, but his end-products were sub-par. His passing was loose as well. 4.5.

Weston McKennie – He was wherever on the pitch, almost a centre-back at times, drifting wide and of course supporting in midfield, but he made a few loose mistakes and lost possession at times in attacking midfield. His recoveries were very good, though. 6.5.

Suat Serdar – Had an okay game in midfield, linked up well but couldn’t have a great effect on the game. 5.75.

Daniel Caligiuri – He was largely ineffective. His set-piece deliveries were not great either. His passing was loose too. 3.5.

Alessandro Schöpf – Worked very hard off the ball to make things happen, but failed to do much. 5.

Rabbi Matondo – Threatened a lot with his pace down the left. Was the most lively in Schalke’s attack, as he tried to make things happen but was wasteful. 5.

Michael Gregoritsch – Drifted to the left often and tried to make things happen. Attacked the crosses but couldn’t convert any. 5.75.

Ahmed Kutucu – He was a bit lively but his passing let him down at times. 3.5.

Levent Mercan – Made a terrible mistake which directly led to Augsburg’s third goal. 2.5.

Team – Schalke were miserable throughout. they had absolutely no attacking threat, and they made sloppy mistakes in midfield and defence. They have lots of room for improvement in every department imaginable. 3.5.

Andreas Luthe – Made an important save early on to deny Matondo. Solid for the rest of the match. 7.

Raphael Framberger – Had a great game at the back just like all his defensive compatriots. 7.25.

Tin Jedvaj – He was solid in defence, repelling the crosses that threatened his side and making crucial blocks. 8.

Felix Uduokhai – Did very well in defence to contain Gregoritsch. 7.5.

Philipp Max – Had a great game at left-back, keeping Caliguiri in check. His set-pieces deliveries were threatening as always. He was all over the left flank throughout the game.- .

Carlos Gruezo – Battled hard in midfield to prevent Schalke from settling in attack. 7.

Rani Khedira Had a strong game in midfield, as he did well to break down Schalke’s attacks. 7.

Marco Richter Wasn’t too effective up front, and failed to support Niederlechner on the breaks. 5.75.

Eduard Löwen – Converted the free-kick brilliantly, and had a decent game after that, as he maintained an outstanding work-rate. 7.25.

Ruben Vargas – Had a decent match with his runs down the left. Prevented Kenny from getting too far forward. 6.25.

Florian Niederlechner – He dropped deep and helped build the Augsburg attacks with his link-up play, and made threatening runs at times. He was largely isolated in attack. 7.75.

Noah Joel Sarenren Bazee – Scored a crucial goal after coming on to double his side’s lead. 7.

Team – It was a classic Augsburg performance. They got an early goal, and then were absolutely rock-solid at the back. They frustrated Schalke throughout the match, and then were able to capitalise on poor mistakes in the second half. 7.5.

Schalke extend their unwanted win-less streak to 9 games, as Augsburg get rid of theirs. Schalke have a lot to answer as they were completely ineffective going forward, and made lots of sloppy mistakes. They did not look like a side deserving of European football.

As for Augsburg, they have gone 7 point clear of the drop zone. It looks like they won’t have any relegation battles to face.