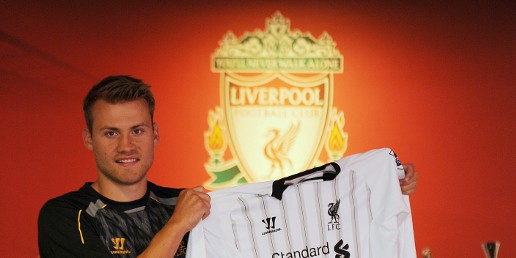 Simon Mignolet becomes the fourth signing of Liverpool in the summer after the club confirmed his signing today.

The 25-year-old has penned a long-term contract at the club after successfully completing his medical and becomes the first Belgian to represent the Reds.

The Belgium international has been one of the most consistent performers for Sunderland since he joined the club from Sint-Truiden for a paltry fee of just £2million in 2010-11, and very quickly established himself as one of the most efficient and dependable goal-keepers in the Premier League.

Many thought that the signing of the £9 million rated goal keeper will put a question mark over Pepe Reina’s future at the club but the 30-year-old Spaniard has reiterated his decision to stay at the Anfield club.

Reina has welcomed a healthy competition in the side and manager Brendan Rodgers echoed on similar lines, said the club has stressed the importance of providing competitions in every position in the squad.

Mignolet becomes the fourth signing of the season for the Reds, following the capture of Kolo Toure from Manchester City, Luis Alberto from Sevilla and Iago Aspas from Celta Vigo.

The signing of Mignolet could turn out to be a master-stroke from the Liverpool manager in near future, for mainly two reasons.

First, the acute need of competition in the side, especially for the goal-keeping spot, which Rodgers has mentioned in one of his recent interviews.

Ever since Reina joined the club in 2005-06, he was always the first-choice goalie for any Liverpool manager. Of course, he earned that position through his sheer brilliance and consistency.

But, in the last three years or so, Reina’s form has declined to a huge extent and the Spaniard has struggled to maintain the level of consistency which was expected of him. Putting it simply, he became more error-prone in recent years while his blunders had cost the Reds too many valuable points.

Not that he was beyond criticism, but such was the state of the club that was passing through the lowest ebb in their history; providing a stiff competition for the goal-keeping spot was anything but a luxury.

Liverpool fans can hope that Mignolet’s signing from that perspective might bring out the best from the ‘Old Reina’ they used to know.

Also, Rodgers probably didn’t want to take the risk with players (so far) that can leave the club in the summer. Barcelona can lodge a late bid for Reina and the Spaniard, despite his loyalty, might be tempted to join the La Liga giants.

In such a scenario, Liverpool will have to delve into the transfer market (hard to imagine Reds playing with Brad Jones as their first choice) and buy another goal-keeper, presumably for a higher price, which may not be their first choice.

However, the situation is now completely under the control of Rodgers. If Reina leaves, the club has a more-than-handy ready made replacement in place and if he stays, then also it won’t hamper his plans.

What will be more interesting to see here is how Rodgers uses both the keepers. Both the players are eyeing for a place in their respective national teams for the World Cup next year in Brazil, and would do everything to impress their national managers.

Therefore, the coming season is so vital for both the Liverpool goal keepers. And if, Rodgers’ can get the best out of both, the deal will be hailed surely as a master-stroke from the Liverpool boss.