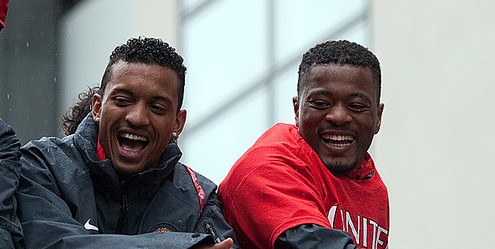 Serie A leaders Juventus have been linked with a move for Manchester United duo Nani and Patrice Evra.

Italian newspaper TuttoSport have claimed that the United pair are both on the Juventus radar for the summer, with the ‘Old Lady’ looking to take advantage of the potential squad overhaul at Old Trafford.

Evra, who has long been linked with an exit in the summer, looks set to leave when his contract expires at the end of the current campaign.

According to the TuttoSport report, the 32-year-old Frenchman will not renew his contract in Manchester for family reasons, and has already rejected the club’s opening offer.

Juve are also tracking Portuguese wide-man Nani, who has frustrated the United faithful for many years.

Possessing of obvious talent and skill, the 27-year-old often flatters to deceive, drifting in and out of games, and often struggles for consistency.

Juventus see real potential in the player however, and are willing to take a gamble on the explosive wide-man.

United look set to continue their squad reshuffle this summer, having already sanctioned the sale of Anderson to Fiorentina.

The Brazilian completed a medical in Italy yesterday, and moves to Serie A on loan for the rest of the season.

Along with Nani and Evra, the likes of Nemanja Vidic, Rio Ferdinand, and Shinji Kagawa have also been linked with moves away recently, with the summer shaping up to be a particularly important one for the club.

What do you think? Should Moyes lose both Nani and Evra? Let me know in the comments below…