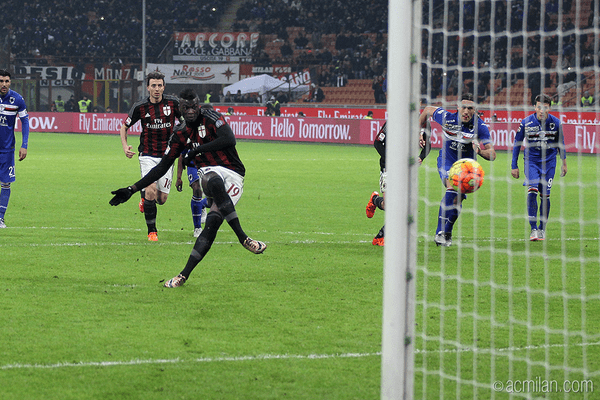 Argentina striker Gonzalo Higuain bagged a brace as Napoli beat Inter Milan 2-1 to go to the top of the Serie A table.

An inspired performance from M’Baye Niang helped AC Milan to earn a 4-1 victory over Sampdoria in the round 14 of the Serie A on Saturday.

The French striker scored two and grabbed an assist as he produced his best-ever-performance in the Rossoneri shirt.

Check the latest Serie A Table from Week 14 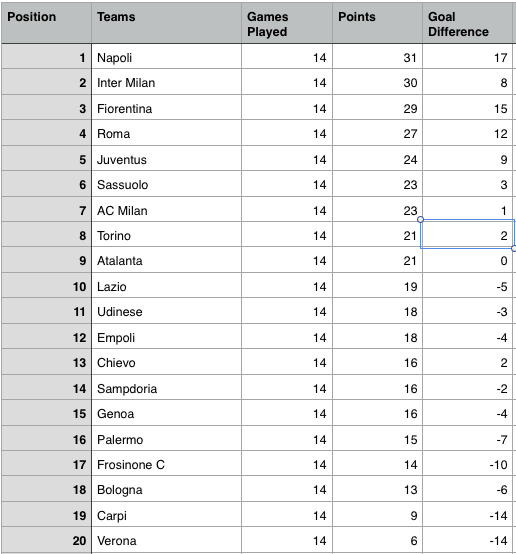 After a relatively quiet first half, Torino finally broke the dead-lock in the 75th min, with Andrea Belotti netting his first goal in the Granata shirt.

Torino kept on applying pressure and should have doubled the lead but for Baselli who missed from point-blank range.

M’Baye Niang finally produced a worthwhile performance (scoring a brace and setting up another) as Sinisa Mihajlovic’s Milan thrashed Sampdoria 4-1 on Saturday.

The 20-year-old was simply unstoppable on the night, while Milan looked organised and looked threatening with their link-up play when going forward.

The raw talent was always evident but somehow Niang couldn’t deliver on his early promise since he first broke into the team in 2012.

Udinese came from a goal down to clinch a 3-2 victory over Chievo in a pulsating thriller at the Stadio Bentegodi. A game where both the sides could have score more than what the scoreline suggest, Udinese just managed to hold on till the end to earn full three points on Sunday.

Lazio had two goals disallowed in their 1-0 defeat at Empoli. The home side took the lead after just five minutes, as Lorenzo Tonelli scored a diving header from 10 yards   from a Leandro Paredes corner. It was Lazio’s fourth defeat in their last five Serie A games.

Despite going a down, Caroi fought back to earn a dramatic 2-1 victory against 10-man Genoa on Sunday. The Griffon took the lead within 8 mins, through Diogo Figueiras, after striker Leonardo Pavoletti was shown the marching orders for lashing out an elbow on Gagliolo. Marco Borriello came from the bench to equalise for Carpi and in the 81st min, he rolled across for Zaccardo to score from 10 yards out and complete the comeback.

In the relegation dogfight between two of the bottom three, Frosinone emerged victorious with a pulsating 3-2 win over Verona. Ciofani scored a brace for the home side while Dionisi added another before half time to give Frosinone a 3-0 lead at the break.

The week has gone from bad to worse for Roma. Rudi Garcia’s side suffered a 2-2 draw at Bologna followed by a 6-1 humiliation at Camp Nou against Barcelona. And here again, they lost 2-0 to Atalanta. Pjanic and Dzeko had chances to score, but the visitors were more clinical in front of goal. Alejandro Gomez scored distance to give the lead, and earned a penalty in the 82nd min, when he was brought down by Maicon, who saw a red card in the process. Denis stepped to slot home with ease to inflict more misery on the Giallorossi.

Two goals in the dying minutes of the match gave Juventus a 3-0 victory over Palermo. After a goal-less first half, Mandzukic opened the scoring for the Old Lady in the 54th min. Sturaro made it 2-0 while Simone Zaza scored in the final kick of the game to take Juventus 5th in the table, with only three points behind Roma.