According to ‘The Sun’, Man City’s Sergio Aguero is now the top ‘Galactico’ transfer target for Real Madrid; with the Spanish giants willing to pay colossal €57m for his signature. 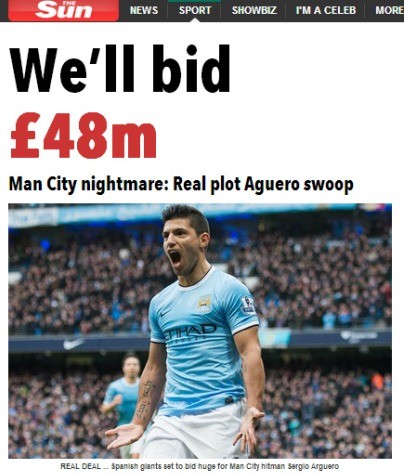 In a story that will fill all City fans with dread, the English paper states that the Argentine goal-machine is Madrid’s priority summer target; and has in fact been in Real President Florentino Perez’ thoughts since 2009.

According to the report, Perez met with Man City owner, Sheikh Mansour bin Zayed on November 23rd, and Aguero was one of the topics of conversation; with Madrid boss Carlo Ancelotti having reportedly given his firm approval for the pursuit.

The signing of a striker must be first on the agenda for Real, with Karim Benzema the only big name forward in their squad.

Aguero, who has 10 goals and 8 assists to his name after only 13 Premier League games this year, would be a fantastic acquisition for the Spaniards; and City boss Manuel Pellegrini will be praying that the 25-year-old is happy in England,

“I don’t know anything about that. I don’t think Sergio wants to leave. That is not a problem for us. I don’t believe in that.” Pellegrini said of the Real rumour, after the 3-0 win over Swansea on Sunday.

In last week’s meeting, it was also reported that the City billionaire and Perez discussed the future of struggling Spanish keeper, Iker Casillas; and the player could be used as a makeweight in a potential deal for Aguero.

Spanish newpaper, AS, expand on this point, reporting that Pellegrini has previously asked for Casillas; with the 32-year-old potentially interested in a new career chapter. 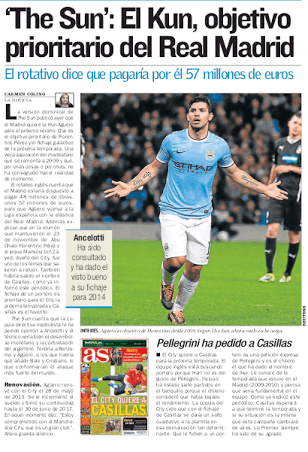 Spain captain Casillas, who is yet to play a La Liga match this season for Los Blancos, was marginalised by former boss Jose Mourinho; a trend that Ancelotti has effectively kept up in the new season.