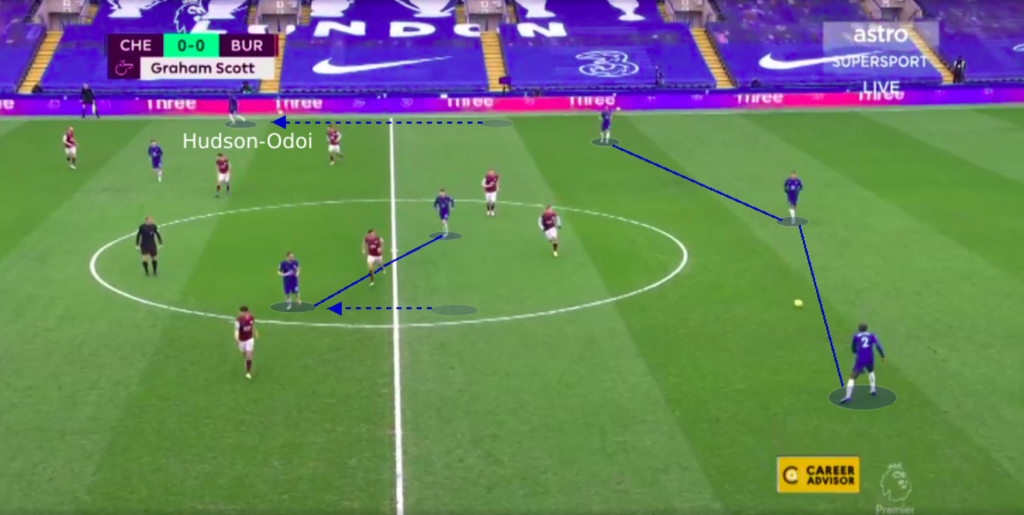 After that possession-filled 0-0 draw against Wolverhampton Wanderers, Chelsea’s second match (and the first with proper preparation) under Thomas Tuchel saw them face notoriously successful bus-parkers Burnley, a side who were sure to test the German tactician’s possession-based style of play.

They went one better tonight, as the ex-PSG boss got his first Premier League win. In this analysis, we will take a look at the changes he made after the Wolves match, and how exactly they functioned: 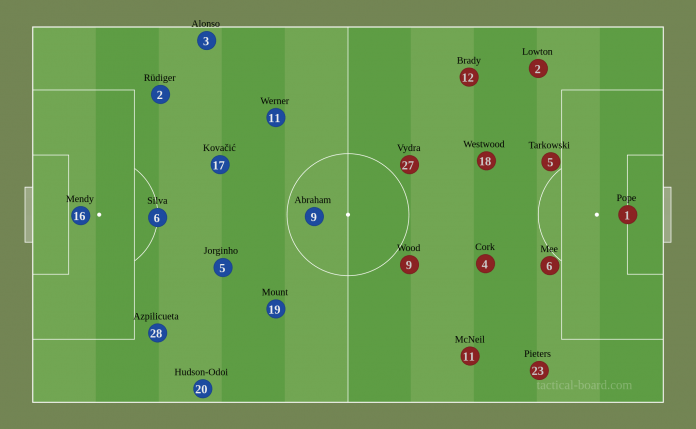 Tuchel doubled down on his 3-4-2-1, while also continuing with Édouard Mendy in goal. César Azpilicueta, Thiago Silva and Antonio Rüdiger made up the unchanged defence as Callum Hudson-Odoi continued at right wing-back, but Ben Chilwell was replaced by Marcos Alonso on the opposite side.

Burnley set up in a 4-4-2 again. Nick Pope continued in goal, with Matthew Lowton, James Tarkowski, Ben Mee and Erik Pieters in front of him. Robbie Brady, Ashley Westwood, Jack Cork and Dwight McNeil made up the midfield, while Matěj Vydra partnered Chris Wood up front.

Chelsea in the first-half

Chelsea’s first-half performance wasn’t too different from their match against Wolverhampton Wanderers, but there were a few tactical tweaks. Here is a quick recap of their original system and, more importantly, all of the changes that Tuchel made: 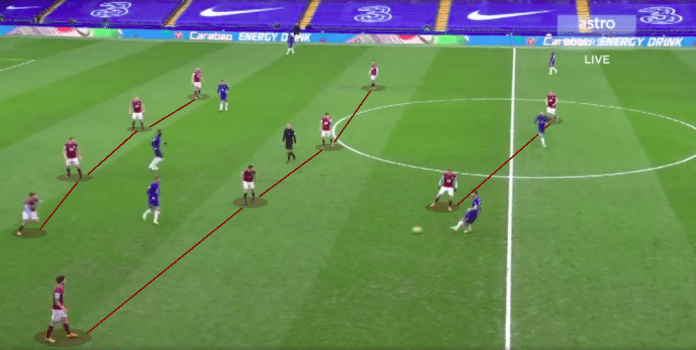 Once again, Chelsea were up against a Burnley 4-4-2. 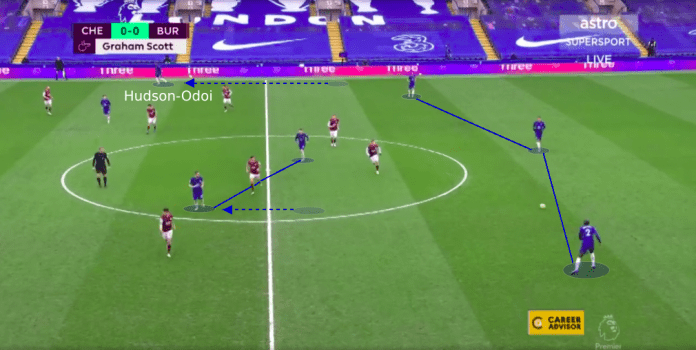 Once again, Chelsea had a 3-2 in their build-ups, with the wing-backs pushing far forward. The only minute difference tonight was that Kovačić moved further ahead relative to Jorginho, instead of it being the other way around as it was in Tuchel’s first match. We will discuss the importance of this later.

Another difference in Chelsea’s build-up against Burnley was that Azpilicueta did not push too far forward as he did in midweek – he stayed in line with the other two centre-backs, as you can see above. 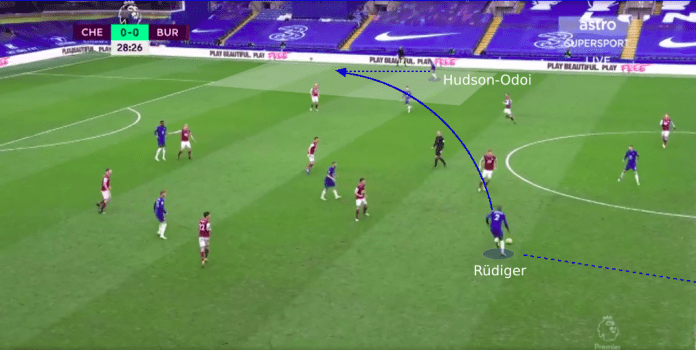 If anything, Rüdiger advanced most often (albeit not too far). From such positions, he would often search for Hudson-Odoi on the opposite wing with sweeping crossfield balls (something he tried four times in the match).

Chelsea played in a 3-2-5 in possession once again, but there was a deviation here too. In the last match, the two wide attackers (Ziyech and Havertz) dropped deep to help progress the ball in the midfield third, but against Burnley, Abraham was the one who moved backwards, with the other two attackers playing on the edge of the defensive line. This should explain why Werner was not deployed as a striker – dropping deep is not his greatest strength, but making runs in behind the defence is.

Back to the point about Kovačić – his positioning in the build-up enabled him to get forward in the Chelsea attacks too, providing an extra presence. 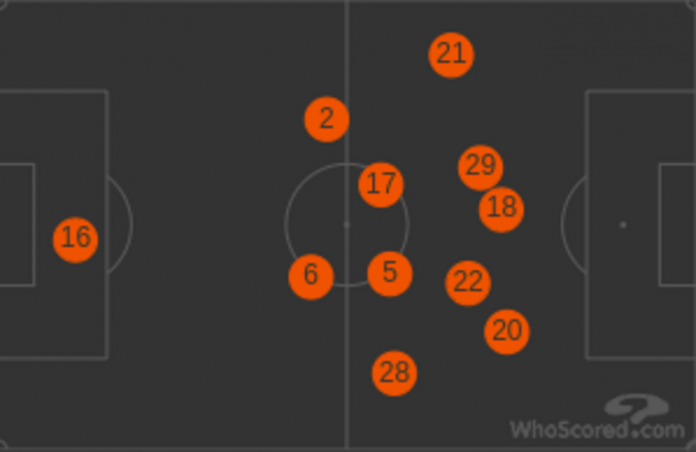 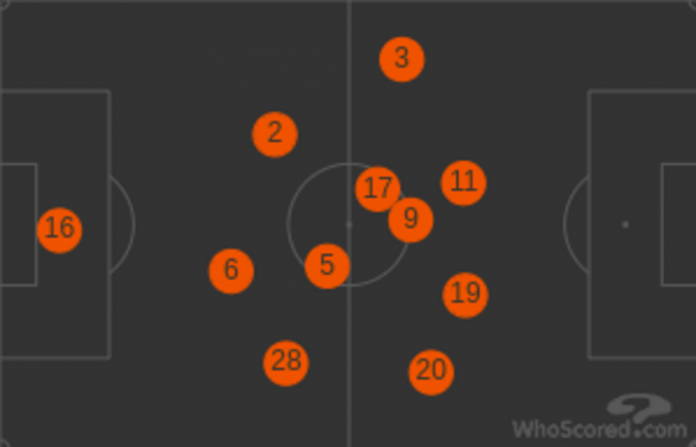 The difference in his (17) average position relative to Jorginho (5) between the matches against Wolves (up) and Burnley illustrates just that. Also notice that Abraham (9) is much deeper than Giroud (18) as aforementioned, and Azpilicueta is in line with the other two centre-backs against Burnley.

One of the issues Chelsea faced against Wolverhampton Wanderers was that they did not have too many numbers in the box to attack Hudson-Odoi’s frequent crosses. This too was solved by Abraham dropping deep, because this enabled the two wide attackers (at least one of whom usually too far behind to attack crosses against Wolves) to enter the box as well.

Funnily enough, though, it was a rare Azpilicueta underlap that broke the deadlock. With the front three and Hudson-Odoi occupying one Burnley defender each, the Spanish centre-back was able to get in unmarked and smash the ball home to make it 1-0.

With that, Chelsea went into half-time with their first-ever lead under Tuchel.

Despite controlling the match and not letting Burnley have a single shot in the first half, Tuchel made a few tactical changes prior to the second half as he brought Christian Pulisic on for Abraham. 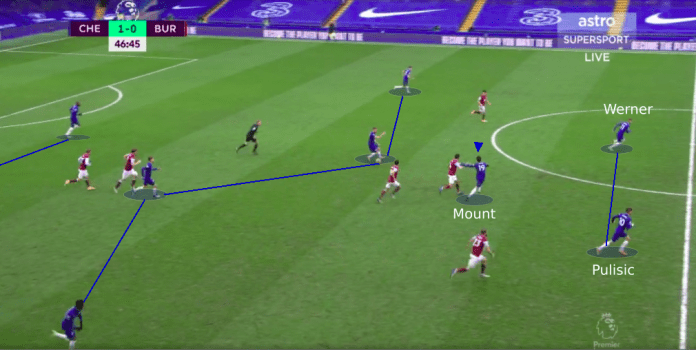 With that, Chelsea switched to a 3-4-1-2 as Mount operated alone in attacking midfield with Pulisic joining Werner up top. You can clearly see that in this transition situation. 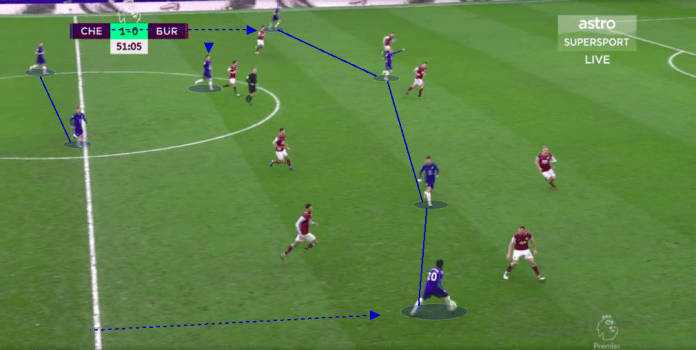 With that, Chelsea switched to a 3-2-1-4 in possession, as you can see above. 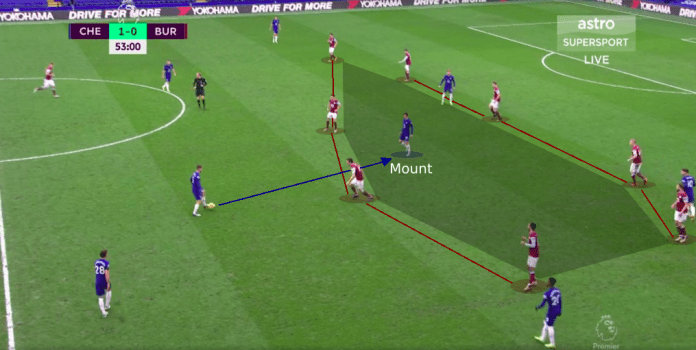 Mason Mount’s move into the number 10 role meant that in possession, he looked to find pockets of space in between the Burnley lines.

He could receive the ball on the half-turn in such positions, and then, he would have two attackers – Pulisic and Werner – both making a forward run in between either Burnley full-back and centre-back.

Just after the hour-mark, Werner and Pulisic switched sides up front. However, the German striker stayed a lot more central, while Mount drifted to the right in behind him.

This is a great example of Tuchel’s tactical savviness. By making this minute tweaks, the German manager caused all sorts of problems in the Burnley defence. Mount’s right-sided bias coupled with Werner’s central positioning forced the two Burnley defence to squeeze inside on their left, opening up an acre of space out wide for Hudson-Odoi.

The only way to counter this for Burnley was to ask Brady or McNeil (whoever was on the left of midfield) to track Hudson-Odoi’s runs. However, if they did so, they would have to break out of the midfield line, and this would leave Mount absolutely free on the right in between the lines. The left-back, Pieters, was in a similar predicament.

That should explain this particularly intriguing conversation between Brady and Sean Dyche:

In this way, Tuchel’s tweaks helped Chelsea dominate the second half even further, conceding just one shot, and that too all the way in stoppage-time.

This was the second low-block Tuchel faced in under a week in the Premier League, and this time, with some proper preparation for his side, he was able to break it down much more successfully. In this match, Chelsea accumulated an xG of 1.43, nearly double of what they managed against Wolves (0.73), so their improvement is quite clear to see.

The second half tweak in the system which saw the Pensioners go from a 3-4-2-1 to a 3-4-1-2 might be the way forward for Chelsea, particularly against such double-decker bus defences where an out-and-out number 10 is key in unlocking the door.

Either way, this was another dominant display for Tuchel’s Chelsea, and this first win might be the start of something very good in the Blue side of London.