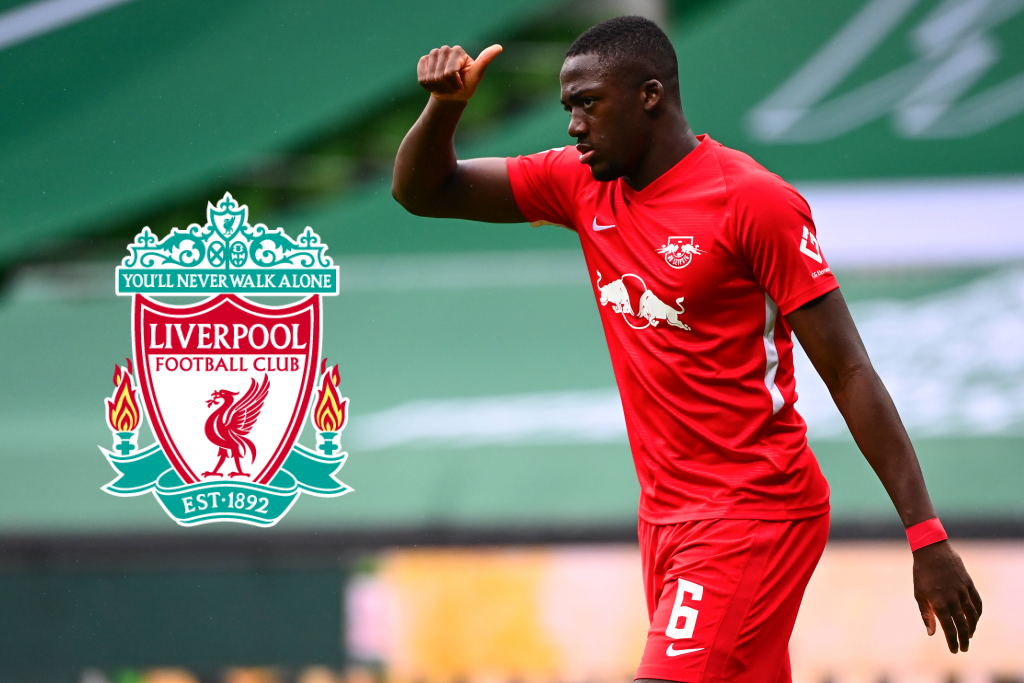 Another transfer window, another chance for Liverpool to add a centre-back or two to their squad.

After injuries stripped them of all of their senior central defenders, Liverpool made a couple of late moves in the January transfer window to bring Ozan Kabak and Ben Davies to the club, but it’s safe to say that neither has done half as well as they would have wanted to.

Therefore, Liverpool are unsurprisingly on the market for another centre-back, and the man on the top of their list this time looks to be RB Leipzig’s Ibrahima Konaté.

After a long period of reports and speculation, a move seems to be materialising now:

Konaté’s youth career started at Paris FC, but he moved to Sochaux in 2014. After making his Ligue 2 debut for the senior squad in early 2017, the Frenchman impressed enough to earn a move to RB Leipzig before the 2017/18 season.

He has been in East Germany ever since, racking up 95 appearances under Ralph Hasenhüttl, Ralf Ragnick and Julian Nagelsmann.

A move to Merseyside is seemingly all but certain for the 21-year-old defender now, so let us take a look at his qualities and see what he can bring to the table for Liverpool:

Konaté is a right-footed centre-back capable of playing in the middle or right of a back-three and, of course, in the right centre-back position in a back-four.

With a height of 1.94m, the Frenchman is naturally strong in duels, both aerially and on the ground, but he is also quite handy when working with the ball at his feet.

Therefore, he has all the characteristics necessary for a complete modern centre-back, which is perhaps why his ex-manager Ralf Ragnick had some positive things to say about him:

He’s so good that he could play for Real Madrid or Barcelona one day.

One of Konaté’s biggest strengths that Liverpool will be looking at is his speed. Clocking up a more than respectable 33.57 km/h, he is the 13th-quickest centre-back in the Bundesliga, and his average of 17.79 sprints per 90 this season shows that he uses it quite often too.

There is much more to the Frenchman’s game, though, especially when he is in possession: 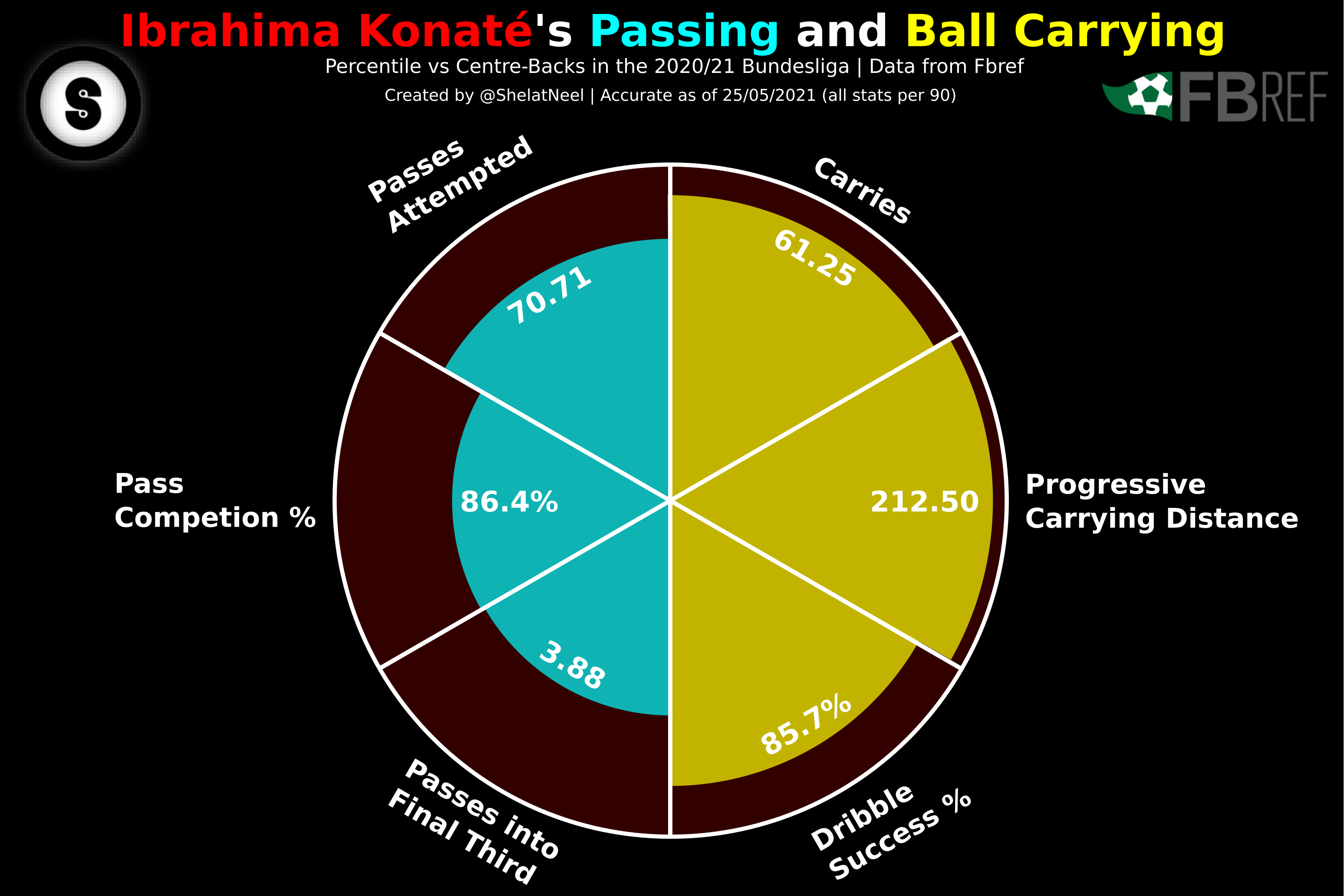 As this pizza chart indicates, Konaté is exceptional at carrying the ball forward while also doing a fair job with his passing.

The French under-21 international is not too bad in defence either, having contested an average of 5.18 aerial duels per 90 in this Bundesliga season, winning a healthy 75% of them.

In the same dataset, he has made 3.5 tackles and interceptions and 4.31 clearances, which certainly are good numbers for a defender playing in a side that likes to keep the ball as much as possible.

Konaté’s adventures with the ball obviously come at a certain cost, which is highlighted by the fact that he has been dispossessed 0.65 times per 90 in this season’s Bundesliga, miscontrolling for the same number of occasions too.

Those figures are undoubtedly high for a centre-back, but given his phenomenal ball-progression, which was underlined in the above pizza chart, they are understandable.

The ex-Sochaux man’s risk-taking in possession is also noticeable in his long ball completion rate, which reads a relatively low 65.3%.

The more worrying issue for Liverpool, though, should be the 21-year-old defender’s injury record. He has only started more than 15 league matches on one occasion at Leipzig, failing to do so again even if his last two campaigns were combined.

Looking at his injury history, there is some relief on offer for Liverpool fans. While there are eight entries in the table, three are either simple fitness issues or knocks, so they can be disregarded.

His thigh problems are over three years old now, and they did not even see him miss a match, so that should not be a concern either.

The Frenchman’s recent ankle injury could be a slight worry, but those can often be down to a bit of misfortune and should not hamper his long-term progress.

Evidently, the biggest issue is the torn muscle fibre, which was most likely a single recurring issue due to how closely spaced the problems are.

Therefore, while Konaté’s track record with injuries is certainly not good for a 21-year-old, he cannot be labelled injury-prone.

While we are yet to see what a post-ACL Virgil van Dijk looks like, it is safe to assume that he will continue to be a mainstay fixture in the Liverpool back line.

Since the Dutchman is primarily used at left centre-back, it makes complete sense to imagine that Konaté will be vying with Joe Gomez and Joël Matip for the spot on the right.

Matip will be 30 by the start of the 2021/22 season, and he can certainly be thought of as injury-prone, so it is hard to see him provide too much competition to the freshly-arriving Frenchman.

Gomez will be his main rival since most reports have indicated that Kabak is set to return to Schalke at the end of his loan with Konaté’s transfer finalised, and Nat Phillips, Rhys Williams or Davies are not really at the level of a top-four Premier League club even after their stellar stand-in job.

Konaté’s pace will prove especially useful here, as van Dijk’s injury will unquestionably slow him down in a Liverpool side that had many issues with a high defensive line this season.

Let’s take a look at some more data to see how he compares with Gomez and Matip: 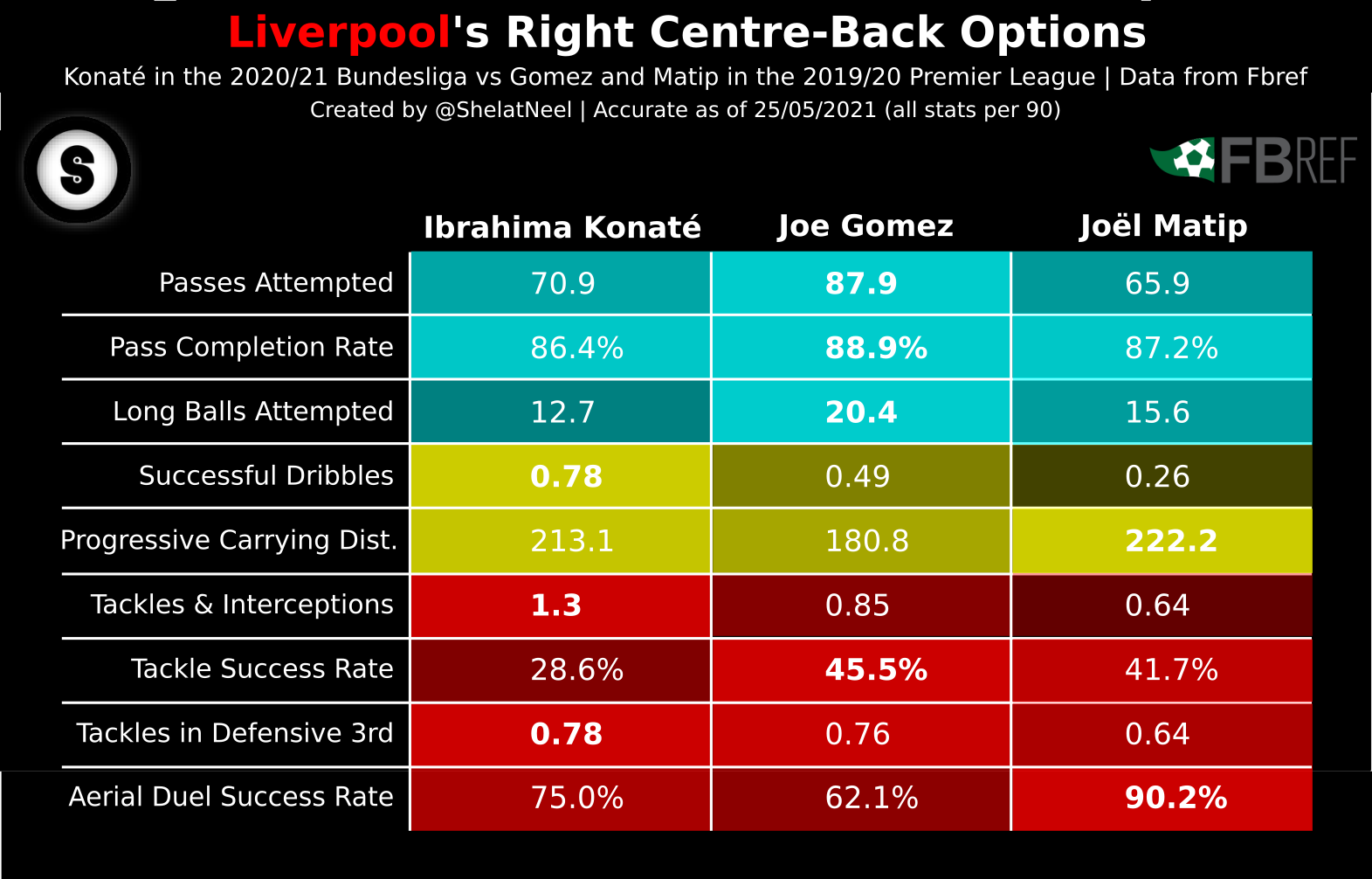 Matip only performs best in just two of the metrics that we have picked, so it really is a two-way fight between Konaté and Gomez as we have already established.

The Englishman is the clear winner in terms of passing, but the Frenchman outdoes him as far as ball carrying is concerned.

It all boils down to the defensive metrics, and although Konaté’s low tackle success rate is a concern, he performs much better elsewhere and looks set to provide stiff competition to Gomez.

Konaté’s signature should prove to be another excellent piece of business on Liverpool’s part, who will be getting one of the top defensive prospects in Europe who still has a fair amount of time to learn and improve at the age of just 21.

The French youth international is already quite close to the finished product and therefore should immediately stake a serious claim to a spot in the Liverpool starting XI.

Assuming that they do not run into another set of injury problems, Liverpool will have an absolutely stacked centre-backs list in their roster with the addition of Konaté, which hopefully will provide a solid base for a potential title challenge next season.