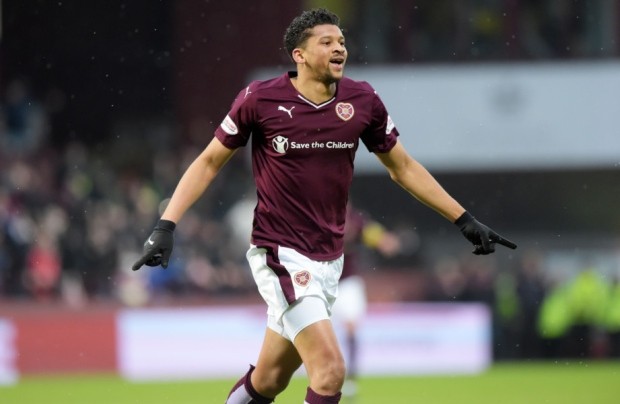 Champions Celtic had the chance to extend their lead at the top of the table to 6 points in Friday’s clash at Tannadice. Meanwhile, Dundee United – with just two wins all season – were desperately trying to stay in touch with next closest relegation rivals Kilmarnock.

It would turn out to be a relatively straightforward night for Celtic, Leigh Griffiths opened the scoring after 20 minutes as he latched on to a deflected Tom Rogic pass to slide the ball through the legs of Eiji Kawashima for his 50th goal for the club – an impressive return from just 86 appearances, only 60 of which have been starts. Celtic doubled their lead just six minutes later when Jozo Simunovic rose to nod Kris Commons’ free kick into an empty net, after Kawashima misjudged the flight. Just as Celtic seemed to be coasting though, Dundee United found a lifeline through Simon Murray. John Souttar was allowed to time and space to thread Murray through before clipping the ball past Gordon without the outside of his right foot. A well worked United goal which reignited the Arabs hope.

Three minutes after the restart however, Celtic reasserted their dominance and Griffiths was again the goalscorer. This time he peeled off to the edge of the box to stab Lustig’s low cross home for his 24th goal of the season. Kris Commons then added the fourth in spectacular fashion, volleying home a delightful chip from the impressive Stuart Armstrong. Celtic missed promising opportunities in transition to add to their lead while Dundee Utd were denied a certain penalty after James Forrest inexplicably controlled the ball with his hand under no pressure.

Celtic ran out of comfortable winners in the end, extending their lead at the top to six points before chasers Aberdeen’s trip to Ross County on Sunday. Dundee United remain rooted to the foot of the table with only the faintest hopes of survival.

Mark McGhee’s Motherwell side ended December as the form side in the Scottish Premiership, with their returning manager crowned manager of the month following three impressive wins – including a 1-2 triumph at Celtic Park. Following a dramatic 3-3 draw with Hamilton on January 2nd, any remaining verve in the Steelmen’s form would be rinsed out in a demolition by Hearts at Tynecastle.

Hearts went into this one with only a solitary defeat from the last ten outings, and quickly took control when Igor Rossi’s stooping header could not be cleared off the line by a despairing Josh Law’s best efforts. Just five minutes later Osman Sow slotted a low drive from the edge of the area past Connor Ripley for 2-0. Two became three in the 22nd minute, this time Gavin Reilly a spot kick after he was fouled by the ‘Well goalkeeper Rippley for his 5th goal of the season.

Hearts’ dominance continued into the second half, enjoying over 60% of the possession throughout. However, it took until the 77th minute for the floodgates to reopen. Callum Patterson swept in number four with a slick left foot finish from 15 yards. A neat turn and finish from substitute Juanma made it 5, before Djoum won another penalty, which he duly converted.

A drubbing for Motherwell, which could have been even worse as the Jambos had two goals ruled out for offside, amid other missed opportunities. An impressive display from Hearts who cemented their place in the top three.

At a snowy Rugby Park, Kilmarnock extended their lead over Dundee United in 12th place to 14 points. The conditions meant two stoppages in play during the 90 minutes to clear the pitch but Killie would hold on for only their second win in eleven Premiership games.

Fresh from signing a new contract, Greig Kiltie lashed the home side in front from close range in the 9th minute after a mix up in the Inverness defence. Just before the interval though, Thistle drew level after Greg Tansey’s cross-come-shot was deflected into the path of Ross Draper who hammered home the equaliser.

After an elongated half-time interval to clear the lines on the artificial surface, Killie goalkeeper Jamie McDonald was forced to turn Gary Warren’s header over the bar as Caley Thistle looked to get their noses in front. Shortly after however, it was Kilmarnock who went 2-1 up. Following two attempts from Inverness to clear the ball, first from the head of Warren and then from David Raven, before Craig Slater met the looping ball on the volley from the edge of the area and it careered past Fon Williams. A wonderful goal to light up a game which at times struggled to excite in difficult conditions.

Kilmarnock level on points with Hamilton in 10th, while Inverness slipped out of the top six at the expense of Dundee.

Dundee handed a debut to former Celtic defender Darren O’Dea for their trip to 9th placed Partick. Buoyed by a derby victory over their closest rivals at the start month, Dundee went to Firhill to face a Thistle without a win in three despite some good results in December.

The Dens Park side made a blistering start, and were 0-3 up after just 15 minutes. Captain James Harkins was fouled in the box, allowing Kane Hemmings to put Dundee ahead with a cool penalty. Tomas Cerny then parried a Greg Stewart cross to the feet of Gary Harkins who finished into the empty net. Harkins was again involved in the 3rd goal when he sprayed a pass out wide which allowed Greg Stewart to square up the full-back and curl a lovely left-foot shot past the helpless Cerny. David Amoo nodded in to give Thistle a lifeline after 23 minutes but it would be short-lived when the integral Harkins curled a beautiful shot into Tomas Cerny’s top left-hand corner to give Dundee a 1-4 lead at the interval.

Partick’s Kris Doolan pulled a goal back to make it 2-4 in the 90th minute however the game was over as a contest by that stage after Liam Lindsay was dismissed for a second bookable offence leaving Thistle with ten men. Dundee ran out comfortable winners, with Paul Hartley’s men replacing Inverness in the top 6.

In the weekend’s drab affair, struggling Hamilton got a point away from home at European-hopefuls St. Johnstone. The Accies would probably have taken a point after their scaring 4-1 defeat at bottom tier side Annan Athletic.

Neither side came particularly close to breaking the deadlock, the headline news from this game being that St. Johnstone’s main man Michael O’Halloran was left out amid continuing speculation of a January move to Championship leaders Rangers. That tells you all you need to know about this game as an entertainment spectacle.