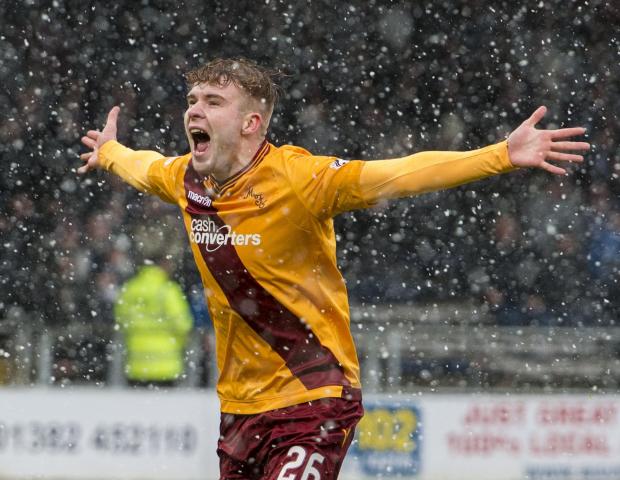 A combination of Storm Gertrude and League Cup Semi-Finals meant that gameweek 25 in the Ladbrokes Scottish Premiership was a sparse one. Only two fixtures survived the various disruptions, with relegation six-pointer Partick Thistle v. Dundee Utd and Hearts’ trip to Inverness both falling foul of the weather.

In wintry conditions at Dens Park, Dundee and Motherwell shared the spoils in an enetertaining 2-2 draw.

Motherwell took an early lead after good work from Marvin Johnson down the left hand side, his high cross was controlled by Chris Cadden, who volleyed home into Scott Bain’s right hand corner to put Motherwell ahead, with his first goal for the club, after just 4 minutes. Dundee’s response was almost immediate however, Gary Harkins released Greg Stewart down the right and his high diagonal into the box was controlled brilliantly by Paul McGowan, who hooked the ball high past Conor Ripley into the top left hand corner to level the game at 1-1.

Dundee have made a habit of fast starts this season, and after their instant equaliser they quickly set about taking the initiative. First, Kane Hemmings put a good chance into the side net but the guilt-edged chance fell to Rory Loy just inside the 12-minute mark. Greg Stewart, who tormented the Motherwell defence all afternoon, got to the byline and his cut back found Loy four yards out with the goal gaping, but the former Falkirk-man rattled the bar and it remained 1-1.

Loy’s miss would be punished moments later as Stephen Pearson drove forward into the Dundee half, exchanging a lovely one-two with Lewis Moult before dashing into the box and clipping the ball over the on-rushing Scott Bain. Motherwell had regained the lead, slightly against the run-of-play, and went in 1-2 up at the break.

Into the second-half and it was Motherwell who almost extended their lead on the counter attack. Scott McDonald broke forward before playing Pearson in on goal, he squared for Moult to tap-in to an empty net but the flag was up for offside and the scored stayed 1-2. Dundee pushed for the equaliser and their pressure would eventually tell in the 88th minute when Motherwell scorer Cadden was adjudged to have fouled Kevin Holt by referee John Beaton – penalty to Dundee. Kane Hemmings slotted it home to level the game at 2-2. A draw perhaps a fair result on the balance of play.

Kilmarnock boss Gary Locke was under increasing pressure coming into this one, after Kilmarnock’s damaging 5-1 defeat at relegation rivals Dundee United the previous week. Hamilton were also looking to steady the ship, having held onto a point at home against Hearts a few days after their 8-1 drubbing at Celtic.

Kilmarnock had the first notable chance of the game as Kevin McHattie linked up with Kris Boyd, but McHattie drove his left-foot shot wide of the far post. Hamilton were then presented with a good opportunity of their own, Carlton Morris led the counter and may have been fouled as he released Ali Crawford but referee Stephen Finnie rightly played the advantage, however Crawford squandered a golden opportunity one-on-one with Jamie McDonald, skewing his shot wide.

Kilmarnock had hopeful claims for a penalty dismissed as Kris Boyd tussled with Michael Devlin, Stephen Finnie waved play-on. The breakthrough in this tense relegation-battle would come after 71 minutes. Accies won a corner, which was swung in by Ali Crawford and Carlton Morris rose highest to nod home. Morris’ effort took a slight deflection off Killie centre-half Conrad Balatoni and beat McDonald in the Kilmarnock goal.

A first win in 9 league games for Accies, who moved up to 8th. The result would prove the final straw for Killie manager Gary Locke, with Lee McCulloch taking temporary charge following Locke’s resignation. Kilmarnock intend to hold talks with former Motherwell and Derby boss Billy Davies in the next 48 hours. If Davies decides to take up the task he faces a difficult job, Kilmarnock now trail one-point behind Partick Thistle in safety, having played three games more than the Firhill side. The relegation play-off is beginning to look inevitable for Killie, who are 11 clear of Dundee United in the automatic relegation spot, but United have two games in hand.

The Scottish League Cup final will be contested between Hibernian and Ross County on Sunday March 13. Hibs edged a hotly-contested semi-final against St. Johnstone at a packed Tynecastle, with goals from Jason Cummings and John McGinn either side of Joe Shaughnessy’s header for Saints. Meanwhile, on Sunday, Ross County sealed an historic 3-1 victory over Celtic to reach their first-ever League Cup final.