Hearts set the bar high for the weekend on Saturday lunchtime when they hammered Hamilton Accies 4-0 at New Douglas Park. The Jambos got off to a flyer and opened the scoring through Calum Elliot on 6 minutes. Elliot has previously been victim of the Tynecastle boo-boys but he curled home a lovely left-foot shot high into the net to set Hearts on their way.

Youngster David Templeton produced an excellent strike on 24 minutes after a shocking sequence of errors in the Hamilton defence. Tomas Cerny made a hash of a poor back-pass from Mensing and defender Canning didn’t do much better with a weak clearance that set up Templeton to fire home the second.

Ruben Palazuelos and Martin Canning were both sent off in the second-half, then Kevin Kyle added a third from the penalty spot before Calum Elliot rounded off a fine afternoon for Jim Jefferies with his second of the afternoon.

The Aberdeen fans were in fine voice at McDiarmid Park with over 2,000 supporters making the trip from Aberdeen to Perth. McGhee’s side got off to a superb start at home to Hamilton but it was looking like the Dons would only be leaving with a point from this game after a pretty poor match.

But with four minutes remaning, substitute Darren Mackie managed to fire the ball low into the net past the helpless Enckleman to send the Aberdeen fans home delighted and put them top of the SPL. 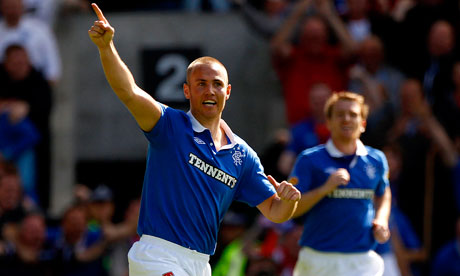 Rangers notched up an impressive 3-0 win at Easter Road in what was an eventful afternoon in the capital. Hibs unveiled their trendy new East Stand which took the capacity to just over 20,000. The first-half was a dire affair with both sides mis-placing the most basic of passes.

Rangers goalkeeper Allan McGregor would make the headlines with his dive to the floor claiming Riordan had headbutted him, when TV pictures showed that Riordan had been nowhere near his head.

The game burst into life towards the end of half and there were some meaty challenges going in. Kyle Lafferty then went in rashly on Liam Miller which started an almighty brawl in the centre of the pitch. Kevin McBride of Hibs blasted the ball against the Rangers striker and the usual handbags broke out.

Both McBride and Lafferty were sent off, both wrongly in my view, and in the opinions of Walter Smith and John Hughes.

Two less men on the park meant the game completely opened up which made it a very entertaining second-half. Madjid Bougherra made a stunning goal-line clearance which gave Rangers a kick up the backside and led to Kenny Miller slamming home from the close range on 64 minutes.

New Rangers signing Vladimir Weiss came on as a substitute and sparked real life into the SPL Champions and played a neat one-two with Davis to set up Miller for his second goal.

The third came in injury time when Miller was fed through on goal by Davis and the striker fired home with his left-foot to claim his fourth goal of the season. Neil Lennon secured his 10th SPL win in a row thanks to a comfortable 4-0 victory against St Mirren. The Buddies contributed next-to-nothing in this game as Celtic could have scored 8 or 9 on Sunday. Welsh midfielder Joe Ledley scored his first goal for Celtic with a neat finish on 6 minutes.

Shaun Maloney’s Celtic career has been hampered by injuries but the striker has had a new lease of life under Lennon and scored on 23 minutes to make it 2-0. Stealing the headlines though was youngster James Forrest who has burst on to the scene this season and has created a new excitement around Celtic Park.

The 19-year-old scored the 3rd for Celtic with a fine finish, hammering the ball high into the net with Gallacher helpless.

The goal of the afternoon was saved till last when Ki-Sung-Yong produced a stunning long-range effort which sailed high into the top corner. The Hoops are in Europa League action on Thursday night and this result will help the confidence going into another dreaded away fixture.

Probably the most impressive performance of the weekend was at Tannadice in Dundee as newly-promoted Inverness Caley Thistle hammered Dundee United 4-0 on their own patch. Terry Butcher’s side produced an explosive performance and still thinks ‘the best is yet to come’ from his Caley side.

Kevin McCann, on loan from Hibs, scored an excellent opener from long-range on 34 minutes. The potent Adam Rooney has caught the eye in Caley’s first two fixtures and scored the first of his brace on 51 minutes with a fine, looping volley. Just two minutes later, midfielder Russell Duncan fired home the 3rd for Caley Thistle and Rooney scored his second from the spot on 82 mintues to give the visitors a much-needed confidence booster early on in the season.

At Rugby Park, Motherwell secured three points ahead of their Europa League clash with Odense after a 1-0 win against Kilmarnock. On loan striker Nick Blackman headed home the only goal of the game on 37 minutes.