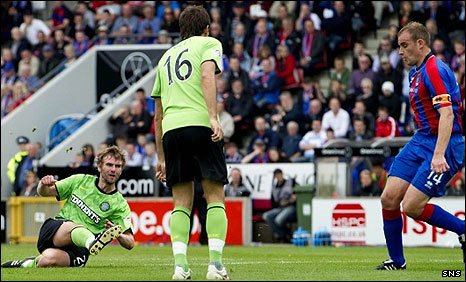 Celtic kicked off the Scottish Premier League season on Saturday afternoon with a tricky trip to Inverness to take on the SPL newcomers. After disappointment against Braga, the pressure was already beginning to build on new manager Neil Lennon and his new signings.

Cha Du-Ri, Mulgrew and Ledley all made their SPL debuts for Celtic, but there was no place in the starting eleven for big-money signing Efrain Juarez. The home side made a good account of themselves in the first-half, but overall there wasn’t much entertainment from either side.

Midfielder Paddy McCourt scored the winning goal after 56 minutes with a fine piece of individual skill taking the ball past three Caley defenders before firing the ball past Ryan Esson in the Caley goal. The hoops were in control from there on and youngster James Forrest had two great chances to get his name on the scoresheet but he failed to convert.

A good start for Celtic in what is traditionally a banana-skin match up the in the highlands. 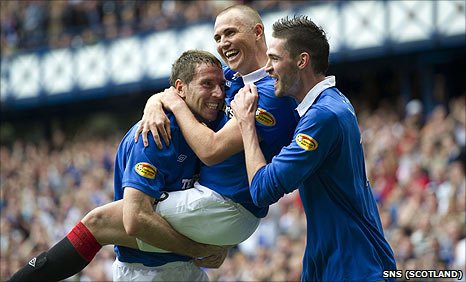 Champions Rangers unfurled the league flag in a fitting pre-match celebration and fielded new signing James Beattie in the starting line-up. The Gers kicked off with a thrilling tempo and created some good chances with Cameron Bell saving well from Kenny Miller. The Gers striker would get his goal on 13 minutes when Broadfoot’s shot was saved by Bell but the clearances on the line deflected off Miller’s back and flew into the net.

Beattie was denied his debut goal with a stunning stop from Bell and Kilmarnock began to come back into the game with Danny Invincible missing an excellent chance from just a few yards out. Rangers seemed rattled and Kilmarnock comfortably dominated a good 10-15 minute spell of the first-half.

Walter Smith’s side came out the traps well in the second-half and went 2-0 ahead thanks to Steven Naismith who had an excellent game in midfield. Naismith latched on to a Miller flick-on and fired the ball under Cammy Bell and into the net. You’d have thought it was game over, but Kilmarnock were backed by an excellent travelling support and got back into the game when Sasa Papac fouled James Dayton inside the box and Jamie Hamill coolly slotted home the spot-kick.

Beattie missed a one-on-one soon after and it was clear the former Stoke striker was just a yard off the pace this afternoon. It was a nervy end for the champions but they start off with three points which will please their supporters who have endured a tough summer. 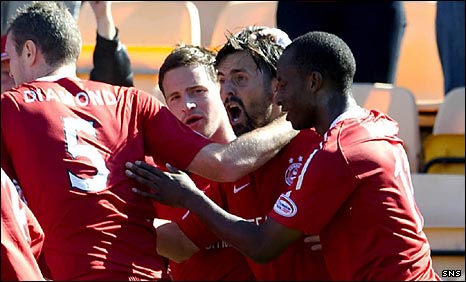 Aberdeen sent out a strong message to the other SPL sides with a 4-0 victory over Hamilton Accies. New signing Paul Hartley was the star of the show scoring the first ever SPL hat-trick of penalties. Sone Aluko was on fine form for Aberdeen and won the first penalty after 19 minutes which gave Hartley his first goal from the spot.

Hartley got his second five minutes before half-time from the spot sending the keeper the wrong way. Zander Diamond bundled home the third goal, before the Aberdeen new-boy Hartley got his hat-trick on 65 minutes. A disappointing afternoon for Hamilton boss Billy Reid but euphoria for Mark McGhee who badly needed an excellent start to what will be a difficult season for the Dons. 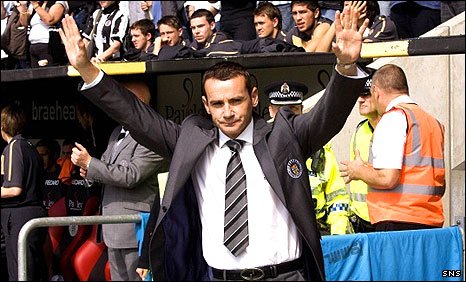 The SPL’s third-force survived a scare at St Mirren Park thanks to Jon Daly’s 89th minute equalizer. Daly converted from close range thanks to Morgaro Gomis’ cross to give Peter Houston’s side a point from the opening game. New St Mirren boss Danny Lennon will be happy with his side’s performance yesterday with five new faces in the starting line-up for the Buddies.

It was looking great for the home side when Sean Lynch opened the scoring with a fine volley from the edge of the box. 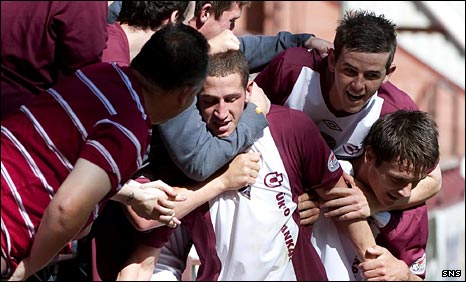 It was another 1-1 draw at Tynecastle in the match between Hearts and St Johnstone. The Jambos left new signings Kevin Kyle and Stephen Elliot on the bench but relied on another Elliot to open the scoring with Calum the man to put Hearts ahead just before half-time. Almost immediately after, the Saints got an equaliser through Sam Parkin who nodded home Taylor’s cross to score his first-goal in a St Johnstone shirt. 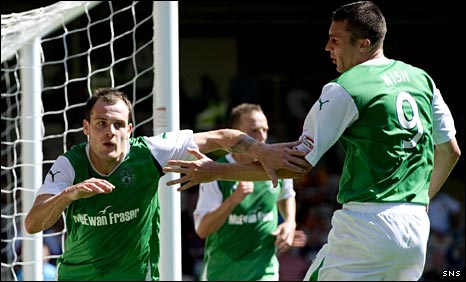 In Sunday’s televised game, Hibs got their season off to a flyer in the eagerly anticipated match against Motherwell at Fir Park. Towards the end of last season both sides produced a stunning 6-6 draw in the highest scoring SPL match. John Sutton got the opener after 13 minutes when he diverted Murphy’s cross into the net.

Just before half-time, Anthony Stokes got the equalizer when Derek Riordan’s creativity set up a good chance for his team-mate and Stokes side-footed into the net. Paul Hanlon and Liam Miller put Hibs 3-1 ahead with about a quarter of an hour still to play, but Murphy’s penalty a minute later was just a consolation as this game provided some excellent entertainment.