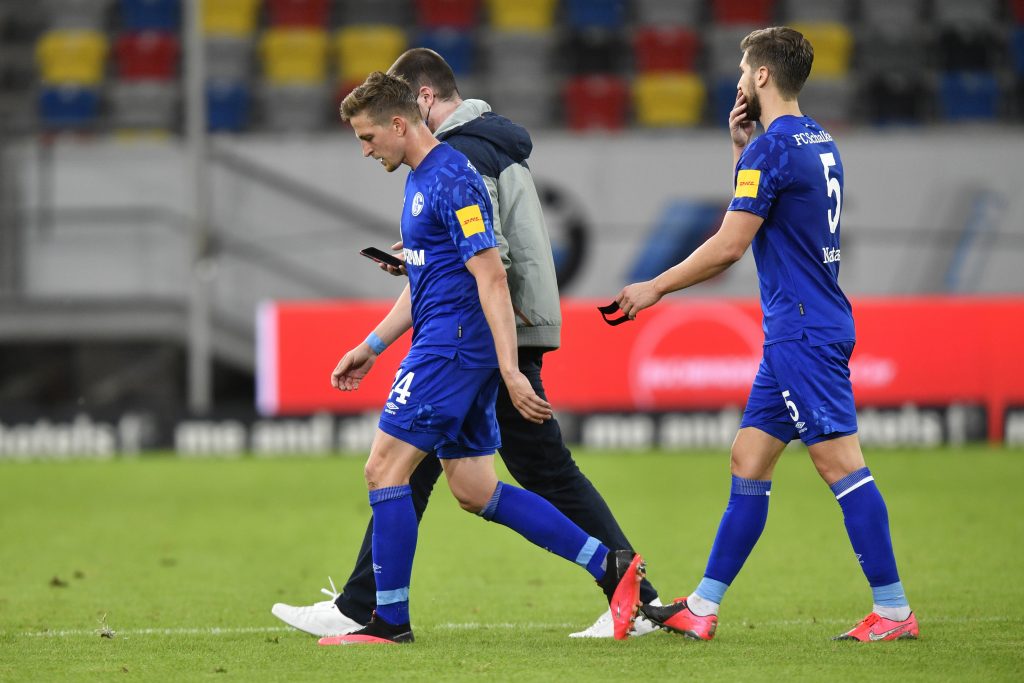 Düsseldorf welcomed Schalke to the Merkur Spile-Arena, with both sides in dire need of points.

The first half saw Fortuna emerge as the better side, but they couldn’t create any great chances. Schalke grew into the game and had a few spells, but couldn’t do much either.

The second half saw Schalke come out quicker, as they created a couple of chances as well. They finally got their reward when McKennie headed Oczipka’s free-kick into the back of the net.

But Düsseldorf bounced back, when Stöger’s free-kick was parried into the area, where Hennings was on-hand to head it in.

It ended 2-1 to the hosts, who finally got a deserved victory.

Florian Kastenmeier – Decent game for him. He made a couple of crucial saves, but couldn’t possibly have prevented Schalke’s goal. 7.

Gerd Zimmermann – He was solid defensively, and did not let anyone past him. 7.

Kaan Ayhan – He was solid in defence, and his distribution was great too. Got an assist for the second goal as well. 7.5.

André Hoffmann – Strong in defence, as he kept Schalke’s forwards at bay. 6.75.

Markus Suttner – He was strong in defence, but he should have done better to prevent McKennie’s goal. 6.25.

Kevin Stöger – Decent in midfield, but couldn’t affect the game in a major way, except through his thumping free-kick, which led to his side’s first goal. 6.

Marcel Sobottka – He was decent in holding midfield, but gave away a needless free-kick which led to Schalke’s goal.

Valon Berisha – Decent game for him in midfield, but he wasn’t overly involved going in either direction. 5.75.

Kenan Karaman – He tried to make things happen as he ran down both flanks, but couldn’t do much. He got the winning goal, though. Worked very hard throughout. 7.25.

Erik Thommy – Another great game for him. He was involved in almost every single attack for Fortuna. His short corners also bore fruit, as one of them led to the second goal. 7.5.

Rouwen Hennings – Kept rather quiet throughout the game, but did well to sneak in and score his side’s first goal. 6.75.

Adam Bodzek – Extremely strong defensively from the moment he came on. 7.

Markus Schubert – Had an okay game. Should have done better to put Thommy’s free-kick out of play, to prevent the equaliser. Almost conceded a third when he misjudged a header. 4.75.

Ozan Kabak – Decent game, but couldn’t do much to prevent the goals. 6.

Salif Sané – Not overly involved in the match,but made the challenges when he had to. 5.75.

Matija Nastasić – Decent defensively, as he tried to contain Fortuna’s forwards. Should have done better to prevent Hennings’ goal. 5.5.

Jonjoe Kenny – Had a decent game down the right. Made a crucial block in the dying stages of the match to prevent a third. 6.5.

Weston McKennie – Strong in midfield as always, and he did well to direct Oczipka’s free-kick home. 6.75.

Alessandro Schöpf – Decent in midfield, but he couldn’t do much to change the game. 5.5.

Bastian Oczipka – He was alright down the left, and whipped in a brilliant free-kick for his side’s goal. 6.25.

Daniel Caligiuri – Better than his performances in the last two games, as he protected the ball well going forward, but his passing was sub-par. 4.75.

Guido Burgstaller – Not a great match for him. He had one real chance, where his finish let him down. His work rate was poor as well. 3.5.

Rabbi Matondo – He was very lively, as he made driving runs through the middle and right flank, but he lacked end-product. His influence waned in the second half. 6.

Team – Schalke were second-best for most of the game, barring 20 minutes in the second half. They had less possession, fewer shots, and were dominated by Fortuna. Yet another poor performance from them sees them drift further away from the European places. They need to start performing better. 5.75.

With the win, Düsseldorf move to within a point of Mainz, who are directly above them in the Bundesliga table. They haven’t lost 7 of their last 9 games now. If they can continue this sort of form, there’s a decent chance that they won’t get relegated.

Schalke, though, are now winless in their last 10 games. They have dropped to 9th in the table, but there’s only 10 points between them and Düsseldorf who are in the relegation play-off spot. They need points, and fast.